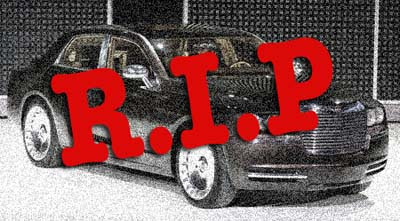 That’s the latest rumor, at least.
Just when they told us the Imperial was going to make it into a pruduction model, they actually pull the plug on it.

The Imperial concept was one of the ugliest, most vulgar design I have seen in years.
They claim the new fuel economy standard killed the project.
Sure. Blame it on that.
Anything but themselves.