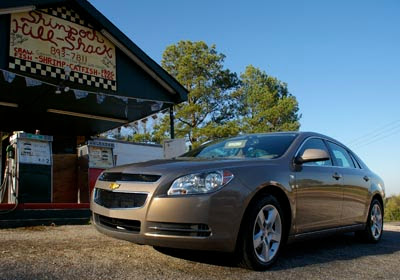 For many years now, US carmakers have been telling us that their new model is finally the one that will really compete with the Camry and Accord. They swore it so many times before.
So, is the new Malibu really it?
I was invited by GM to Memphis in order to find out.
I couldn’ pass on a free trip and the opportunity to drive a car before almost anyone else.
Would you?….

The first thing I noticed was how good the car looks in the flesh. And on the street next to other cars.
I drove a Camry Le 2.4 and a new Accord LX at this event as well.
The Camry does look a lot cheaper than the Chevy. And besides, there are so many around that’s it’s actually hard to tell.
The new Accord looks.. Well. Weird and disturbing from many angles.It tries too hard to look upscale.

The Malibu has much better proportions and does look like a more expensive car.
And it has much more presence in the street. 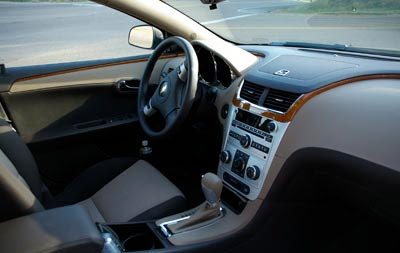 The interior is a huge step forward from what we’ve seen from GM before.
But as we know, that’s usually not enough.

Most of the plastics on the dash are soft, but the upper door panels are hard. Which is actually much better than the never ending sea of hard plastics inside the new Accord.
The new dash in the Malibu looks great. It has a retro feel to it with the double scoop design, similar to the old Corvettes. But yet looks very modern.
And it has one of the best use of wood trim I’ve seen in years. It is applied more like a thin brush stroke.
There is a bit too much chrome trims for my taste. But to most buyers it will help the interior look upscale. Toyota and Lexus also now use the same stuff around their dials.

The center console is trimed in the “now usual” silver plastic. And there seem to be too much contrast between it and the black radio and air controls. It does look much better in the upscale LTZ model where that silver plastic is replaced by a darker metallic grey color. Which they should use in the other models too. 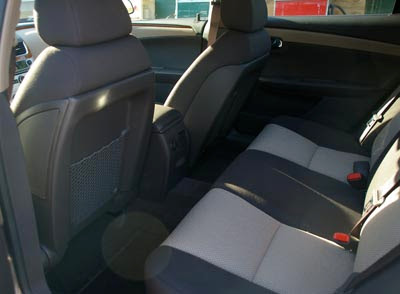 The back seat is really impressive. I know the numbers are smaller than the Accord, but I really couldn’t tell.
The only thing missing, just like in the Aura, is a center armrest.
I was told this was due to the architecture of the back seat itself and couldn’t be fixed due to cost. (they would have to redesign the whole thing)
So it won’t be coming next year. Or ever.
That’s really too bad.

Talking about what’s missing, a navigation system will also not be available.
What they have instead is a “turn by turn” system from Onstar. Where you tell onstar where you want to go, and the turn by turn voice commands are downloaded to the car.
It might actually be quite useful, and it won’t cost an extra $2000. (Onstar comes standard in the car with a year subscription) 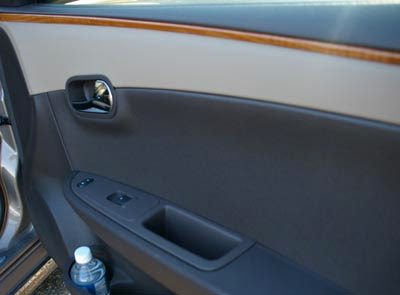 The door panels are the only let down about the interior design. They seem straight out of the Aura, where they don’t look great either.
But the doors do feel very solid, more so than the Aura. 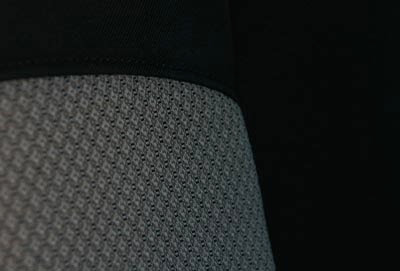 You don’t need to get the top of the line model, or leather to have nice looking seats. The cloth feels and looks pretty upscale already. With pretty original choices of 2 tone colors.
Although the grey interior without the wood trim is just to close to that “rental car feel”. 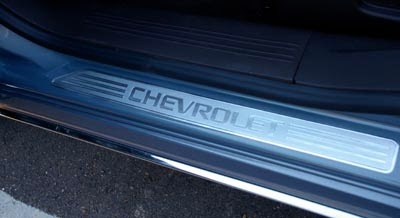 Once you start the engine, you notice that it is a very quiet car. Although the engine doesn’t sound nearly as good as the Accord 2.4 Liter, it is on par with the Camry’s. Quiet at idle, then buzzing just a little bit during acceleration, but silent on the highway.
The car is so quiet it is really, really close to a Lexus. And it does feel very solid.
I also loved the steering. (electric on the 2.4L)
It is light but not too much. And very linear. No weird artificial feeling and with a very stable on center feel. The brakes also feel great.
The ride is more Camry than Accord. With a bit more feel to it. And the car feels more stable than the other two.
I thought the Accord was just a bit too firm for most family car use. With a very twitchy steering feel the Malibu didn’t have. 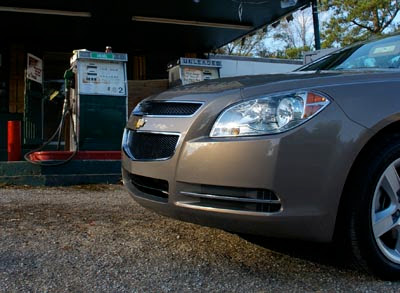 I never thought the 4 speed auto was a problem. You never feel the shifts anyway. the 6 speed will be available in the spring on the LTZ version of the small engine. I thing the only real advantage will be in the gas mileage.
With the 4 speed I was averaging almost 25mpg in mixed driving. But that was mostly beautiful country roads.

Outside, I noticed the opening of the trunk was a bit too narrow in you need to load large objects. That comes from the design and profile of the car.
But at least, unlike the Accord, the floor is flat.

The car I drove would retail for about $21 000.
Conclusion: Well, like most everything, it is a matter of choice and some compromising.

To me, the new Malibu looks much better than pretty much any other family car in the segement.
It drives great, feels as solid as it looks.
The only complains about the interior are now small details. Wich pretty much happens with any other car.
After hours of driving, I still really liked the interior design. It is just a nice place to be for a long time.
It is relaxing yet a very pleasant car to drive. I still wanted to drive it more.
To me that’s really what matters. Most everything is pleasent to the eye. Unlike, again, the Accord.

The main problem with this car is the image. Once you get past it, you still need to tell people you drive a Chevy.
It shouldn’t be a problem, but for many people, it is.
Which also can affect the resale value.

I think GM is now putting out really nice cars . People in the market for a family car really need to give the Mailbu a try.
When you buy a car, you should drive everything in the price range anyway. Don’t get stuck with old ideas.
Companies change all the time. Look at Audi in the 80’s or even Hyundai just a few years ago.

I really honestly think that if I was in the market for an affordable family car, I would get this.
I do like it better than the Accord and Camry. I like the Altima but the ride is too firm for a family car.
I also like the Passat very much, but it’s at least $5000 more.

I also drove the Hybrid and the V6 6 speed version and I will comment on that later.
As well as the Accord and Camry.