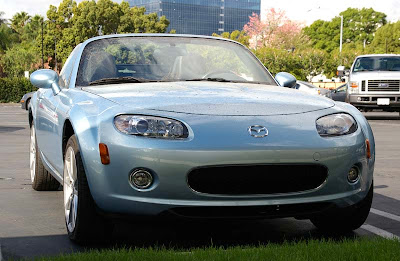 Finally I got to actually drive the Miata for a week.
I was really curious to compare it to the Solstice Turbo I drove a few months ago.
The model I had was a “Special edition”.
That comes only in a blue/silver color with a very dark brown interior leather. 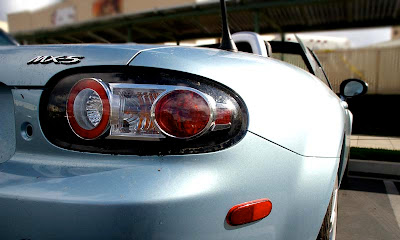 -HOW DOES IT LOOK?

The Miata has always been quite a good looking car to me. And I would say the current one is the best looking of all.
But even though it is the largest ever, it is still a very small car. It really shows when you walk up to it: it is just so low and tiny.
The design is modern and tasteful at the same time.
But to me, not as modern, striking and good looking as the Solstice.
But again, I understand this is just a matter of taste. 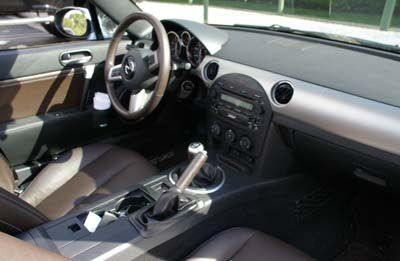 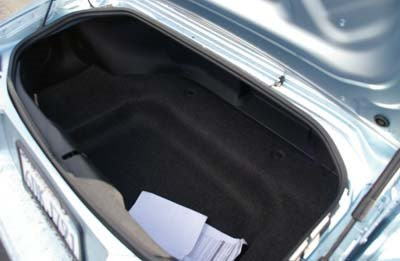 -HOW IS IT INSIDE?
Well, of course, it seats pretty low, like any other cars in this class. But once inside, it’s actually OK. Not great, but OK.
The flat dashboard across in front of you makes the interior feel smaller than the Solstice.
It does have “super small car” feel when you’re inside. Again, more so than the Pontiac where the dashboard is design to angle away from the driver. Not as flat as the Mazda.
I was told by many readers how much better the interior would be, compared to the Solstice.
And I was quite disappointed.
Just like in the Pontiac, I couldn’t find any area, besides the door armrests, where any kind of soft plastic was used.
Sure, the cup holders are in the console. And the little compartment between the seats is lockable. But still no map pockets and hard plastics everywhere.
Plus, I actually like the dashboard design in the Solstice much better. And the radio in the Pontiac accept my iPod.
Although the Mazda will next year.
The major difference is the trunk. The Miata does have one. And a pretty useful one. Large enough for this kind of car. 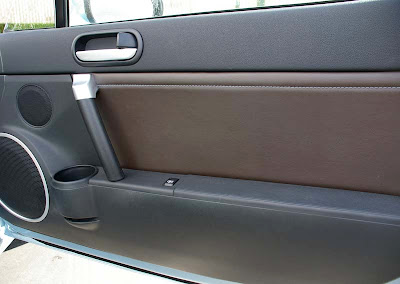 -Ride
I was surprised of how hard the ride was. My car had the 17 inch wheels. I’m not sure if it had some kind of sport suspension option, but it was one of the hardest riding cars I’ve ever driven.
And on our bad L.A roads, I got tired of it, really quick. The car is low and handles great, there is no reason for such a punishing ride.
Plus it made the car weird to drive past 65. It just didn’t feel stable. Not a car I would want to drive fast.

On the otehr hand, the Solstice had a near perfect ride: firm yet still very comfortable.
I just would drive the Miata on a long trip. The noise inside with the top up doesn’t help either.
You really need to crank up the radio. A lot.

-Steering
Just like the ride, I thought the steering was too hard for this kind of car. It made the Z feel like a Lexus.
there is just no reason for it. I like a firm, or even very firm steering, but this is just too much.
And again, the Solstice steering was near perfect.

-Engine
The 2.0 Liter engine had plenty of power. Pretty much all the time. Again, it didn’t sound as refined as I was told it would be.
But it did get the job done…

-Transmission
The 6 speed manual is smooth and very easy to use. This one is quite a bit better than the one used in the Solstice.
But I only averaged a bit over 23MPG in my week of driving. Which included about 35% freeway.
Not bad bust not great.
I did a bit more highway driving with the Solstice and got an average of 27MPG. With a 260hp engine.

-SO???
Well, I have to admit I was disappointed by the Mazda Miata.
It does feel like you are driving a very tiny car, all the time. It’s cute, but it’s really not something I would take on a long drive across the state. The hard ride and the noise would drive me crazy. (Something I really do not need right now…)

And yes, I have to say, I still like the Solstice much better. I think it looks fantastic, but also drives much better.
While still being sporty.
Sure, there is no trunk.
The interior is a bit cheap. But I thought the interior of the Mazda wasn’t great either. And looked much more generic.
So nothing on earth is perfect.
Compromise is what we need to learn to live with. Or not.

I’m sure I will be getting lots of hate from Miata owners and lovers for this.
But hey, this is just what I think.