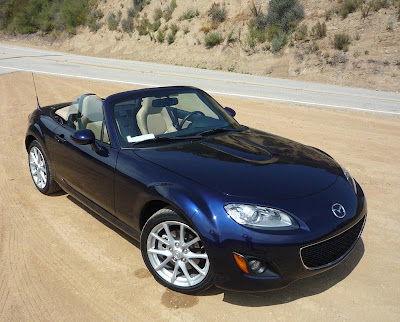 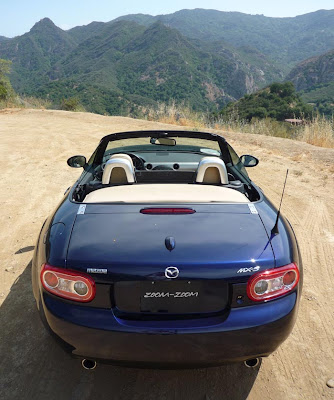 -HOW IT LOOKS.
I did drive a version of the Miata last year, before the “facelift”, as they say.
The new look is nice, but I still prefer the previous front end. It just looked more natural, and simpler.
The rest of the car is pretty much the same.
The Miata has always been a great looking car, and this one is no exception. 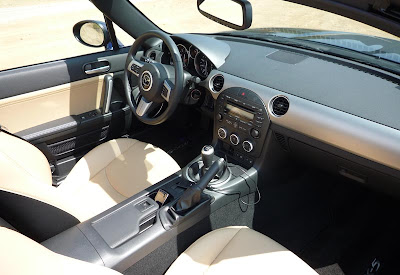 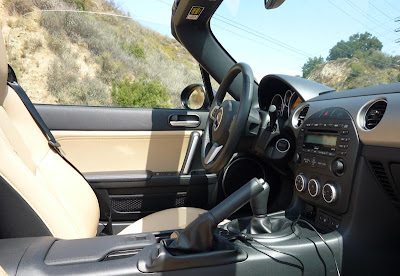 -HOW IT IS INSIDE.
The interior is pretty much the same as before.
They finally added a plug for your iPod. And you can also get a new tan interior, at least with the leather option.
But still, all surfaces are hard plastics. It’s well put together, and looks OK, but a bit of a let down.

The stereo on the Grand Touring model sounds excellent. The seats are the same, supportive and comfortable. 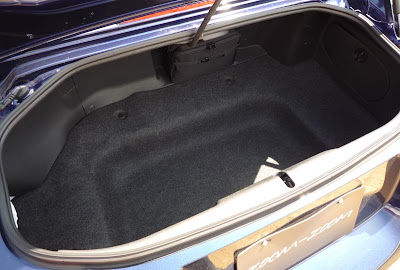 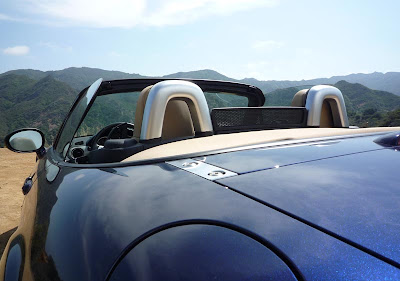 -HOW IT DRIVES.
-Ride
The ride is still too stiff for every day driving on bad streets. Which most of them are in L.A…
At least with the Grand Touring model and the Sport option. ( The only one Mazda had available)
I really think there is no need for such a stiff ride. I drive to work, see my friends and get stuff. Basically, like 99% of people.
I do not drive on the track.
The car is low and pretty wide for its size, so it’ll handle fine without a stiff ride.
-Steering
The steering seems to be much improved from the car I drove last year. It now feels much more secure at freeway speed. The previous one was very twitchy. It is still very firm, but the car seems more planted on the road .
-Engine
The engine has plenty of power for the car. But it is still pretty rough and noisy to me.
I guess most people don’t complain about it. I know it’s a sporty car, but the noise doesn’t sound very refined.
Most readers like to complain about how crude the Solstice was. But after driving both, I liked the GTP Turbo engine better.
None of these will win smoothness award, but I thought the Pontiac was more in tune with the car it was in.
The Miata does look like a more refined car, while the noisy engine sends another message.
-Transmission.
My car was a 6 speed manual. With no complains.
The clutch isn’t very forgiving, but OK.

-SO???
Like I said, the Miata looks more refined than it is.
The engine is noisy and not that smooth, the transmission feels like what you’d find in a sports car. Although I still see the Miata as a “sporty” car only.
Driving long distances can be really tiring. Noise with the top up is almost worse than when it’s down.
I guess the hard top option is well worth the extra money.
Plus the ride is stiff for a daily driver.
And I do usually prefer a firm ride. (The 370 is fine with me)

The thing is, with the death of the Solstice and Sky, the Miata is pretty much the only game in town if you want an affordable 2 seater convertible. (until the VW comes out)
I would recommend avoiding the sport suspension and really look into the hard top option before you buy.