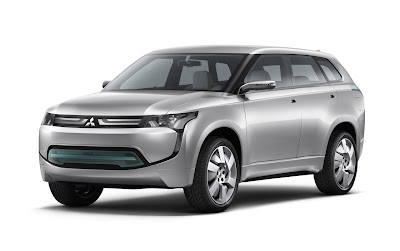 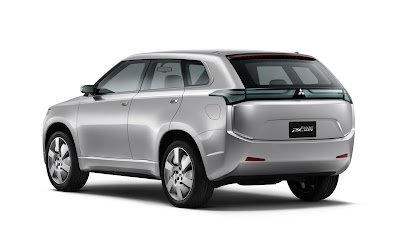 let’s hope not.
Although they are claiming this is previewing their new “Design language”.
So the big mouth up front is gone, already.

By the time a version of this reaches production, it won’t look modern or new.
They need to do something, fast…

Here is the official PR BS:
“Powered by the new Mitsubishi Plug-in Hybrid System, which significantly extends the frequency a hybrid vehicle is driven in EV mode, the Mitsubishi Concept-PX* MiEV† returns fuel economy in excess of 50 km/litre. The Mitsubishi Concept PX-MiEV is a new-generation concept car that balances high environmental performance with running performance by utilizing differential motors and Mitsubishi’s all-new S-AWC (Super All Wheel Control), that utilises E-AYC (Electric-powered Active Yaw Control) which transfers torque to the rear left and right wheels. Other features include Mitsubishi’s cocochi-interior**, which provides occupants with a comfortable cabin environment, as well as many of the latest safety technologies.

Solid, Safe, and Simple were the keywords which drove the development of an exterior design suitable for a next-generation crossover that creates simple appearance from which all extraneous elements have been pared and that is free of the “rugged” elements typical in conventional SUVs. The headlamps and rear combination lamps use LED emitters that give the car an innovative and modern appearance as well as delivering better environmental performance with their reduced power consumption. The body uses a newly-developed metal colour that gives the car a metal shell-like appearance. Combining elements of both spoke and dish styling, the road wheel design highlights an unprecedented new look to the body as well improving brake cooling and aerodynamic performance.

The interior was designed to give an image of an airplane cockpit to improve the driver’s concentration, with an instrument panel that envelops the passengers and utilises seats that keep the passengers firmly in place. In addition, the entire instrument panel and door trim utilise soft LED lighting that express the vehicle’s innovation and refinement.”

Good luck with that…