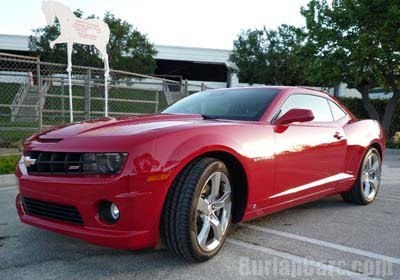 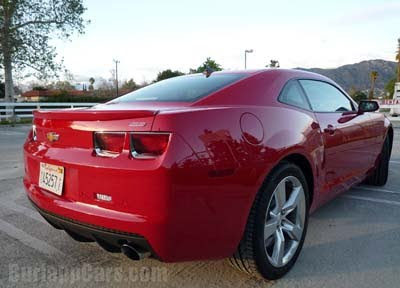 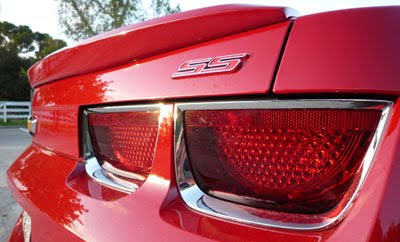 Again, the new Camaro looks amazing in any version.
The SS comes standard with 20 inch wheels. Which were part of the RS package on the V6 version I drove earlier.
There are only a few differences between the SS and the V6 RS.
Besides the SS badging of course, the wheels although the same size, do have a different design.
Which also means that the cheaper V6 models looks as good as the SS. 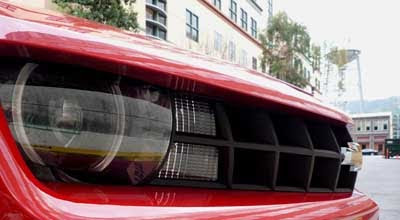 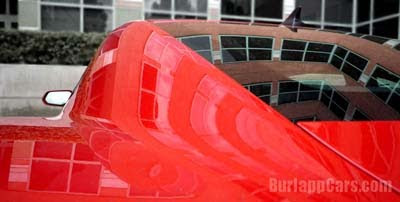 -HOW IT IS INSIDE.

Again, the interiors are the same in the V6 and V8.
Both my cars had great quality leather seats. 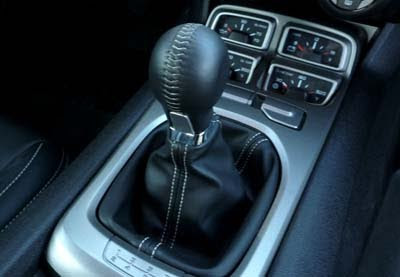 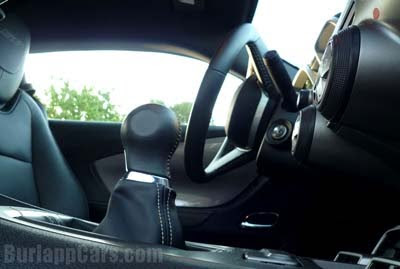 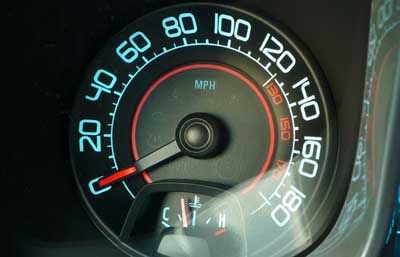 The one thing I notice, was the different speedometer.
Just to make sure you know your V8 car is faster than the cheaper V6 model.
But the numbers are now crammed into the same space and are too close to each other to read easily and quickly.

The car still has bluetooth and I was able to use both my Phone and iPod without any wires.
It also came with Onstar’s turn to turn navigation, which I actually tried for the 1st time.
A regular GPS is not offered on the Camaro.
I had read a few reviews of the system before trying it out for myself.
First you need to press the Onstar button on the rear view mirror and actually talk to someone and tell them where you are going (The satellite already knows where you are)
Which for some people might be an annoyance. I really didn’t mind it.
It takes about the same time as typing an address on a GPS screen.
Then, within seconds, the route is sent to your car system.
A voice gives you turn to turn directions, just like any other navigation system. It also shows direction arrows on the stereo display.
I found the system very fast and accurate.
It can also quickly send you new directions in case you miss a turn.
I found it to be a very good system. Especially for the price: free for the 1st year.
Then you’ll have to pay $28.90 a month for the high end Onstar plan.
Sure, it is still not as convenient as a regular full screen GPS system that shows you where you are at all time. But it’s also not a $2000 option.
And most after market portable GPS units would ruin the interior design when stuck onto the Camaro’s clean looking dash. 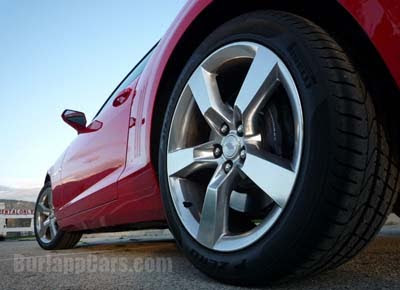 -HOW IT DRIVES.
-Ride.
The ride was very similar to the V6RS version.
Very firm but never uncomfortable. The whole car feels as solid as a tank, no matter how bad the roads get.
-Steering.
I was a bit surprised about the steering, in a good way. Again, it seems the calibration is similar to the RS V6.
Which means accurate, but pretty light.
Making it easier to drive every day than the Nissan 370Z with its very hard steering.
Especially when you shift your own gears.
-Engine.
With over 420 hp, the SS is one of the most powerful car you can buy. At any price.
The “muscle car rumble” is present as soon as you turn the key. You can even feel it in the seats.
Quite an amazing experience. And something you don’t get in cars like Z.
It is not for everyone, but you get used to it very quickly.
Of course, there is always more power than you’ll ever need. At any speed.
Take offs can be amazing . The whole thing feels and sounds like a race car when you push it.
Otherwise, it it always solid and refined, even with the ever present rumble. Which sounds almost luxurious when compared to the old 60’s muscle cars….
All this fun does come with a price.
GM rates the SS at 16mpg in the city.
I couldn’t match this number, my weekly average in the city was between 13 and 14mpg. Which is not that far off.
But I did get 27mpg on the freeway, while they claim only 24 officially.
Actually pretty good considering the 426hp. Really.
-Transmission.
The SS I drove was equipped with a 6 speed manual.
The shifter is very short, and all gears are very easy to shift. Which again helps make this super powerful car a very easy daily driver.
But…
It comes with a weird feature that forces you to shift from 2nd to 4th gear. That’s right, not 3rd but 4th. In order to save gas.
It doesn’t do it all the time. (When it does, a diagram appears on a display in front of you)
Only when you stay in 1st long enough.
But most of the time, it feels very wrong to be in 4th at such low speed, so you need to quickly go back to 3rd. Or even 2nd.
I have to say this is a horrible feature.
I can’t imagine it saving that much gas anyway.
I did get used to it, a bit, after a few days. Learning how to rev the engine properly so I could choose my own gears.
Which is the whole point of getting a manual in the 1st place.
If I want a computer to tell me what gear to use, I’ll get an automatic.
I remember hearing about a similar system in the Corvette yeas ago, and owners hated it.
Not sure if the current Corvette still has it.
Or if the 6 speed manual in the V6 Camaro has it.
I would love to try a manual Camaro without this. 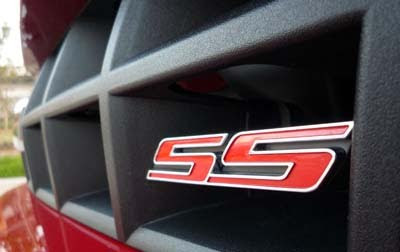 -SO…
The Camaro SS is a true muscle car for the 21st century.
It is really a modern version of an old American classic.
It is something you don’t forget after driving it, unlike so many cars these days.
My test car came at a bit over $36 000 with a couple of options. Again, not that expensive for 426hp.
But I really think that for most people, the “about $6000” difference with a similarly equipped V6 isn’t worth the difference.
The V6 looks as good as the SS. And with over 300hp, it also has more than enough power.
Plus mileage is a bit better too.
And again, about $6000 less.
If you must have a true and unique muscle car experience, only the V8 will do. That is true.
But if you just want a great looking car, with lots of power, tons of personality and a wonderful driving experience, the V6 is the way to go.
At least for most people.