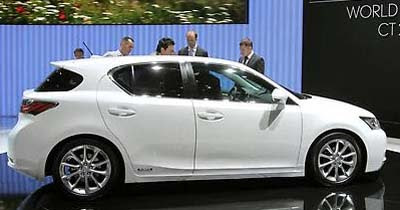 It is now official. It will become the smallest and cheapest Lexus model in the US, where the main competition will pretty much be the Audi A3. And that’s about it…

It will be shown at the New York auto show in a couple of weeks.
Here is the official word from Lexus:
“ Lexus announced today that the all-new CT 200h premium compact hybrid will go on sale in the U.S. in early 2011 as the first dedicated hybrid vehicle in the premium compact segment.

The sporty five-door will be on display March 31 through April 11 at the 2010 New York International Auto Show. The new CT 200h debuted at the 2010 Geneva Auto Show in early March and will join the HS 250h as Lexus’ second dedicated hybrid.

The CT 200h’s Lexus Hybrid Drive technology features two motor generators. Each performs specific functions and can operate as both a motor and generator. The engine-driven generator can charge the battery pack or provide additional power to the drive motor as needed. The drive motor is driven by electrical power from the hybrid battery pack or generator and provides motive force for the front wheels. The hybrid battery pack is located under the rear cargo area within the wheelbase for optimized balance.

The electric motor, generator and power split device are all housed in one highly compact casing the size of a conventional gearbox, with drive to the front wheels provided by Lexus Hybrid Drive’s quiet and smooth shift-by-wire, electronically controlled continuously variable transmission (E-CVT).

The CT 200h will also be equipped with four drive-modes: Normal, Eco, Sport and EV. Normal mode has an essentially linear throttle response that gives naturally progressive power while the Power Control Unit (PCU) limits drive voltage to a maximum of 500 volts. The Eco mode adjusts air conditioning settings and the throttle for the best possible fuel economy. For an enhanced fun-to-drive experience, Sport mode, a first for the Lexus hybrid line-up, can be selected. Sport mode provides more direct Electric Power Steering (EPS) settings and throttle while the PCU boosts drive voltage to a maximum output of 650 volts. Vehicle Stability Control (VSC) and Traction Control (TRAC) are less intrusive when Sport mode is selected, allowing for more lively driving. In EV mode, under certain circumstances, the vehicle can be driven up to one mile using only the electric motors.

The sporty premium compact hybrid will also feature an ECO driving indicator that illuminates when the vehicle is being operated in an environmentally sensitive manner.