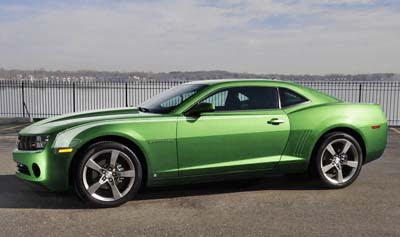 Looks like the Camaro will be getting a few tweaks for the new model year.

Mostly to keep up with the competition from the 2011 Mustang.
The only thing the Camaro actually could use is true iPod connectivity, and a Navigation option.
Which it is not getting.
Here are some news from a letter rumored to have been sent to “Camaro5”:
Good morning, Camaro Comrades!

You’re some of our most enthusiastic and passionate owners and we want to make sure you’re among the first to hear about updates for the 2011 Camaro.

-A new horsepower rating of 312 Horsepower on the V6

-Synergy Green will be offered on all models for a limited time (You asked for it…we listened!)

-Head-up Display will be offered as standard equipment on the 2LT and 2SS models.

We thank you for your continued enthusiasm for all things Camaro! Feel free to share with our fellow enthusiasts!