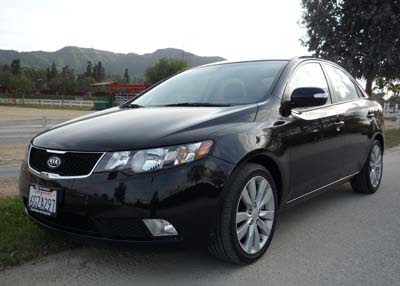 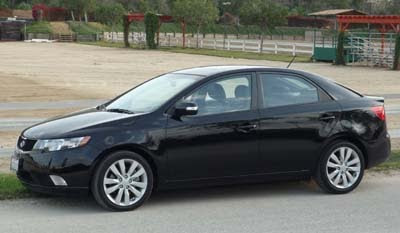 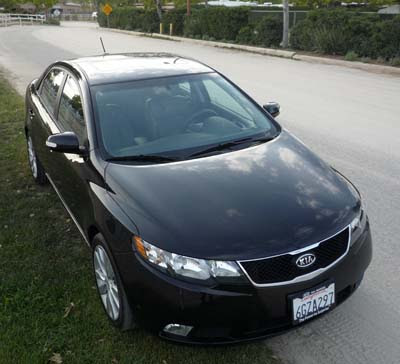 I think the new Kia Forte is one of the very best looking small sedan on the US market.
Kia’s chief design officer Peter Schreyer was the former lead designer for Audi. And it shows on the Forte.
Not that the Kia looks like a $40 000 Audi. But it has a presence, subtle proportions and design maturity rarely seen in a compact sedan.
Especially in black, my test car looked more upscale than expected.
Most people were surprised when I mentioned it was a Kia.
The 17 inch wheels also look great on the car. 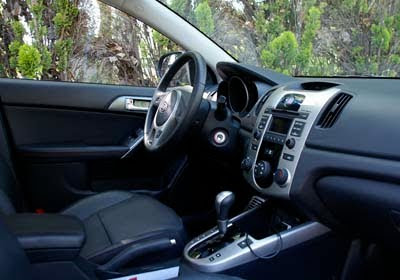 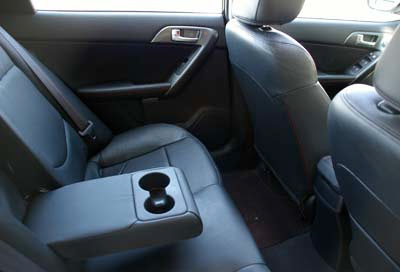 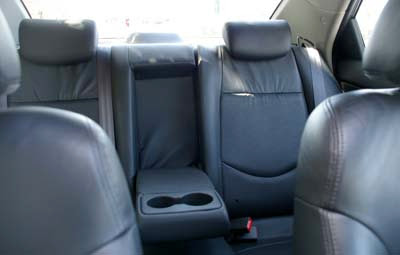 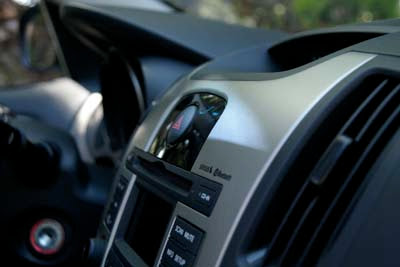 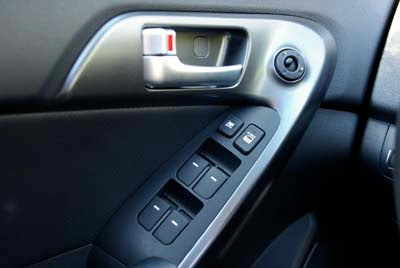 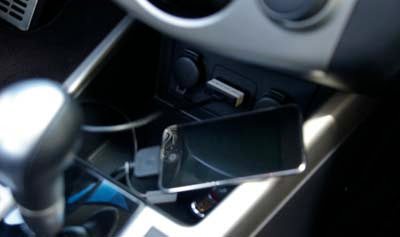 -HOW IT IS INSIDE.
The interior looks at least as good as the competition. The doors feel solid when you get into the car.
Hard plastics are pretty much everywhere, except the armrests. But the same can be said about almost everything else in the class. (except the Mazda3)
At least everything is very well put together and feels very durable.
The leather makes the interior look even more expensive than it is. But the seats are pretty flat. Giving you that feeling you are sitting on them, not in them.
I was surprised how roomy the back seat was. There is almost mid size room back there…
The silver accents on the SX look much better than in most recent Toyota models.
Everything is well designed and pleasant to look at.
The interior lighting is just red. Not red, blue and purple. Or green and red, like some other cars I’ve seen. Just simply red.
Refreshing classy simplicity…
The car comes loaded with electronic features.
Bluetooth worked perfectly, for both my phone and iPod.
It has iPod connectivity through USB, so you can control it from the dash or your steering wheel .
I must say, the 6 speaker stereo sounded fantastic. It is one of the best feature of the car.
It sounded as good or better than most cars I have tested over the past few years.
Quite amazing.
The only thing that bothered me was the fact that the USB plug is right under the stereo, on the console. So your iPod is always exposed. And it doesn’t need to be, because you control the whole thing without ever touching it.
The plug should be in the glove compartment or the center storage, so you don’t have to disconnect our iPod and hide it every time you leave the car… 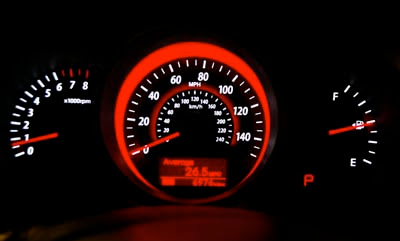 -HOW IT DRIVES.
-Ride.
The ride is firm, but always comfortable.
It is a wonderful car on the freeway, with a quiet and smooth ride.
And the car always feels as solid as a tank, no matter how bad the roads get.
-Steering.
The steering is pretty light. And it does have a bit of that “Nintendo” feeling I’m not too crazy about.
But the feeling pretty much disappears after a few minutes. You do get used to it.
The responsive steering makes the car fun to drive around town.
-Engine.
The first thing I noticed was how powerful the car felt from a stop.
It basically has a mid sized car engine.
It is very quick around town, and there is always more than enough power for almost any situation.
It is also very quiet. At all time. And always feels very smooth.
The car is rated at 23 city/31 hwy.
I got about 22 in strictly city driving. Not pushing it .
And I did get over 39mpg on the freeway doing between 65 and 70mph.
Which I think is pretty fantastic.
But with most of my driving being done around town, my average went down to about 25mpg at the end of the week.
Which I think is really good for a powerful, fun to drive compact. 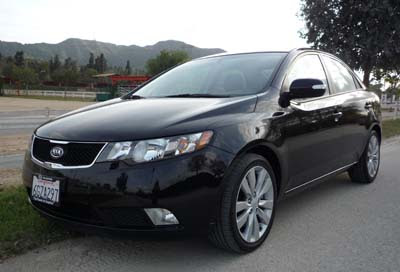 -Transmission.
The 5 speed auto was fine. But not as perfectly smooth as some other cars.
I could feel the car shifting gears just a little more.
And it doesn’t want to downshift unless you really push it.
But that’s the case for most cars these days…
The standard 6 speed manual would fix that problem. 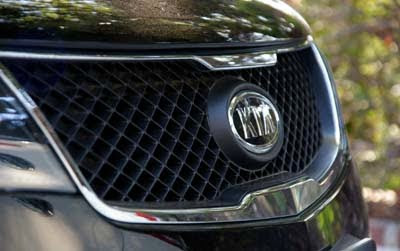 -SO???
The first thing most people would ask me when I told them I was driving a KIA was: “Is it as good as the Japanese cars?”
That’s the big question . “Should I save money and get a Kia, or a Hyundai”?
I think the Forte is at least as good as a Civic or a Corolla. And looks better than both.
It has more power than both and feels as solid as anything else.
My personal favorite would still be the Mazda3. But that is pretty much a matter of taste.
With the Forte, you are getting a car that is as good as the competition, while still saving between $2000 and $3000.
And you are getting a much better 5 year warranty.
And KIA keeps improving the car. 2011 will see a 6 speed auto and Navigation option.
My loaded test car was $20 400.
I would recommend the new Forte to anyone looking for a good looking, roomy and well made compact sedan.