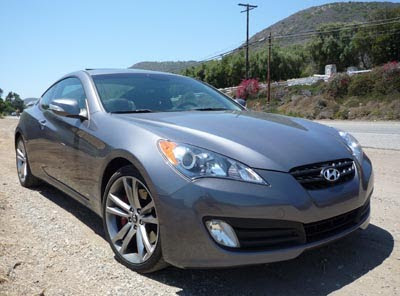 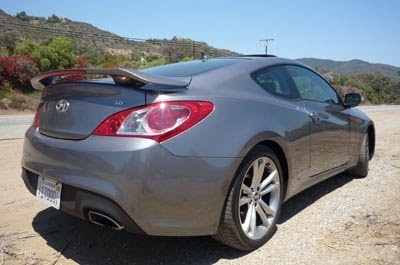 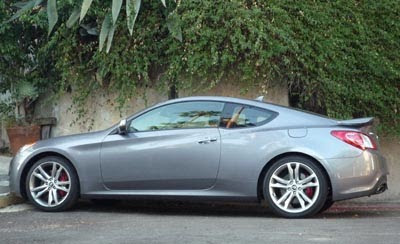 I think the Genesis coupe is a great looking car, period.
Sure, it doesn’t have the visual heritage of the Camaro, or the Mustang. But it is a truly modern design that does get noticed.
It has a strong presence on the road and looks great from every angle.

I even really like the rear side window that many people are complaining about.

My test model was the 3.8 Liter Track, which unfortunately, includes an ugly spoiler in the back.
It carries its name proudly, spoiling the rear view of the car.

The 19 inch wheels included in the track package look great. 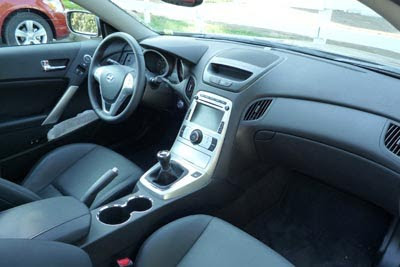 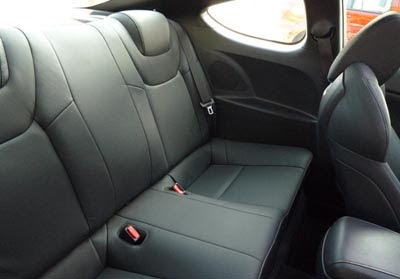 -HOW IT IS INSIDE:

The interior is often compared to the Infiniti G37 coupe.
As a matter of fact, the whole car is…

The one thing that really stands out, at least for me, is the silver painted plastic on the console.
It is bright, and does look cheap. And it’s right in front of you. All the time.
In a black interior, you can’t miss it.

I am not a big fan of the Infiniti interior, but at least, the trim is metal.

Otherwise, the plastics are mostly fine. Of good quality and the whole interior feels well put together.
The seats feel and look great. (I just wonder why the backrest adjustment is manual when you get the “power seats”…)

But I noticed that the navigation system does get washed out in the sun. There is nothing to hide it. Like a hood.
It does get pretty hard to read sometimes. 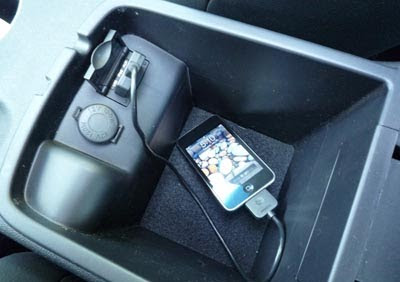 As you can see, the iPod USB plug is where it is supposed to be: under the armrest, hidden.
So you don’t have to unplug your iPod and hide it every time you leave the car.
A nice touch. Not everyone does it. 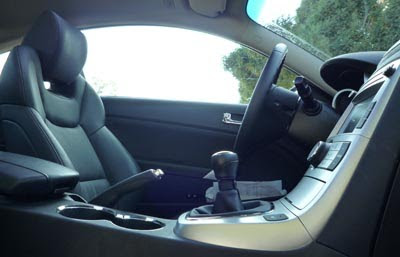 But wait, there’s more!
Hyundai just released a picture of the slightly revised interior for 2011.(below)
And, guess what. The console is now finished in a very dark grey color.
The cheap looking silver is gone.
While they were at it, they even improved the plastics in the cabin.

I really thing these small changes now put the Genesis interior on par (at least) with what Infiniti offers with the G37 coupe. 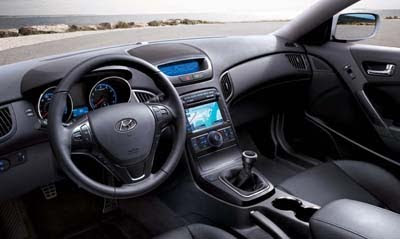 -Ride.
With 19 inch wheels and a sport suspension, it won’t ride like a Lexus.
It is very firm. But it never got too hard for my taste during my week long drive on various roads around L.A.

-Steering.
It seems pretty “twitchy” sometimes. Responding to every single irregularities on the road.
But I got used to it and actually enjoyed it a after a while.
The Nissan Z has a similar feeling.

The Camaro’s steering feels a bit more refined, and easier to drive.

The engine is also on par with the Nissan V6. The exhaust sounded as good as anything .
Sporty and refined.
And of course, with over 300hp, it never feels slow. 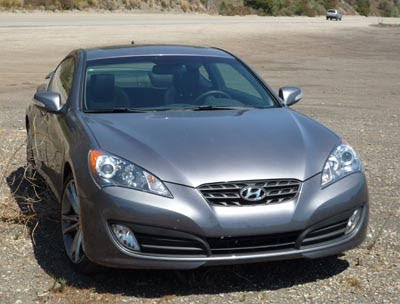 Shifting was on the “sporty’ side.
But not as much as the Z37. And not as buttery as the G37.
Kind of in-between.
Which is actually how the whole car feels. 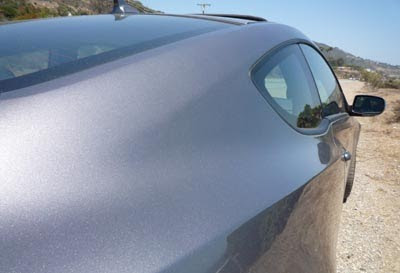 The Genesis coupe has been compared to the Infiniti G37. Over and over again.
Fair enough.

My test car was a top of the line, including everything except the automatic and retails for $31 250.
Which is quite a bargain for a car with leather, GPS, sunroof, etc…

The real competition, at least pricewise, is the Altima Coupe V6 manual, still over $31 000.
And that is without GPS, because navigation is not available with a manual transmission. (!)

The Genesis coupe is a great car that I would not hesitate to recommend.
It put a smile on my face every time I was behind the wheel.

It is priced far below similar models from the competition. But drives and feels as good or better.

I would say, for those who have driven these 2 cars, it fits between the Z and the G coupe.
It almost feels like a 4 seater Nissan Z. But not quite as brutal.

My only wish would be for more interior color choices. As of now, of you get the track version, it’s black.
And that’s it.
The brown/black combo is only on the Automatic 3.8.
And what’s wrong with a great looking cream/black combo?

Still.. A great looking and great driving car at a great price.

I will try to get my hands on a 2.0 Liter soon and report on it.