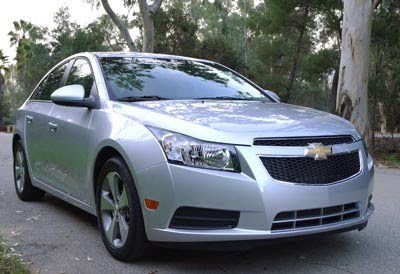 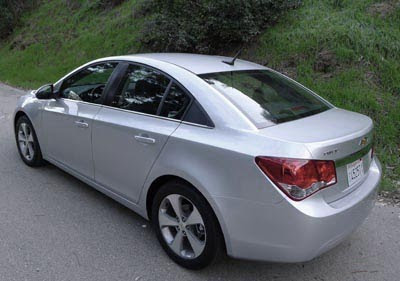 -OUTSIDE
I know most of us already think of the Cruze as a “not so new” design. It has been hipped for years, and actually came out in other countries a while ago.
But in person, it does look quite modern. Even if a bit on the conservative side of the spectrum.
I see its main competition as the new Jetta.
But most will also consider the new Elantra and 2012 Focus sedan.

I do think it has more presence and a fresher look than the Civic.

And the current Corolla cannot even compete in that department… 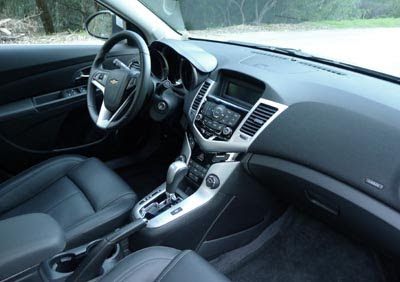 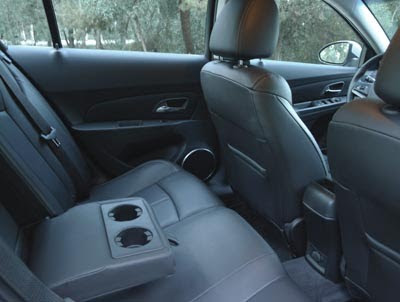 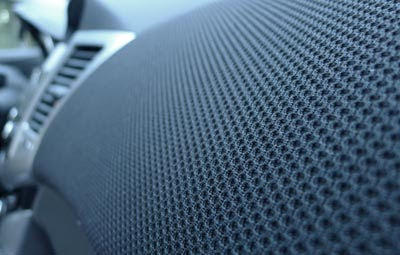 The interior feels a bit more original than the exterior.
I really like the shape of everything. Even if there is still a bit too much of silver plastic on the console for my taste.
Everything feels really solid. And all plastics, even the hard ones, have a high quality look and feel.
I would say the interior is quite a few steps above the new Jetta, both in looks and quality.

The seats are very comfortable, and quite supportive.
The steering wheel feels great, and all the secondary switches seem very solid and smooth.
And I really like the cloth trim on the dash. It looks good and shows that someone is trying something different.

The back seat is OK, but not nearly as roomy as the new Jetta. And even a bit smaller than the Kia Forte.
The Cruze is pretty large for a compact sedan, but unfortunately, it doesn’t translate in a roomy back seat…

The only thing that really bothered me was the quality, or lack of it, of the standard 6 speaker stereo.
The base car comes with a 4 speaker system, but the 2LT gets an upgraded 6 speaker unit.
And I have never heard such weak bass from a car stereo. I had to actually turn the dial all the way up.
Something I never had to do in any car. And it still sounded just OK.

I would definitely consider the $400 9 speaker Pioneer upgrade. 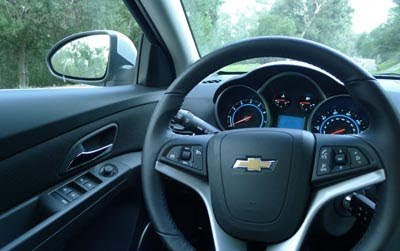 .Ride.
The ride is great. And pretty firm. A bit more so than the Jetta.
And the car feels great on the road, firmly planted at all time.

.Steering.
The steering is on the lighter side of things. The usual for that kind of smaller family car. But it has actually more feel than the Jetta, with better accuracy off center. Especially on the freeway. 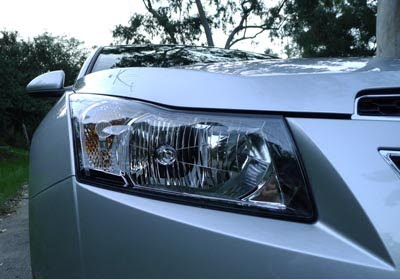 My test car was equipped with the new 1.4 Liter Turbo engine.
Which I was really curious about.
It is the smallest one used in this class. Everything else in that category has a larger displacement engine.

At first, I was bothered by the sound. At idle, it isn’t as quiet as most others. And the really annoying thing is that it transmits small vibrations through the seat, so you can not only hear it, but also feel it.

But once things are under way, it settles down and the car is actually very quiet.

Over the course of a week, I did get used to the sound.
And actually grew to like the sportiness of it.
But still, the Jetta’s 2.5 Liter engine sounds and feels like a luxury car next to it.
The only other engine that sounds that busy is Mazda’s 2.5 Liter in the Mazda3.

The VW TDI is also a bit quieter.

The 1.4 Turbo is rated at 24 City and 36 HWY.
I got 26 City and reached 40 on the HWY.
Which is really good.
But not that much better than what I got a few weeks earlier with the 2.5 Liter Jetta.
And the new Elantra could do even better.

The 6 speed auto was always eager to downshift, which added to the sporty character.
But it also could get a bit abrupt at times. 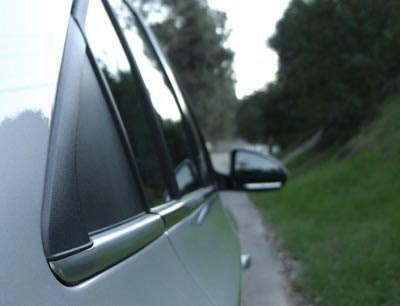 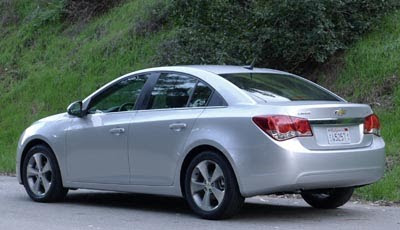 The Chevrolet Cruze proves that GM can produce a highly competitive compact sedan. It actually feels like what most people would expect of an import.
The ride is firm and comfortable. The interior is one of the very best in the class. And the whole car has a satisfying solid feel to it.

But the new 1.4 L Turbo is not for everyone. It doesn’t feel as sophisticated as the rest of the car.
I think it will be a better match for the upcoming Chevrolet Sonic.

But on the other hand, it does give the Cruze quite a sporty feel. And the car is super quiet on the freeway.

The Kia Forte is a better deal. You can get the SX 2.4 Liter sedan with a sunroof for about $21 300.
So the Cruze is price inline with its competition.

But none of these cars will offer the upscale interior feel of the Cruze.

If you are looking for a compact sedan, you definitely need to test drive the Chevrolet Cruze.