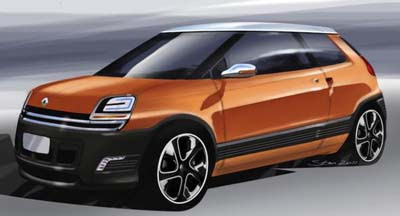 Renault seems to be getting an all new version of the old Renault 5 , or LeCar as it was known here, ready soon.
They might even show a concept version this fall.
The new model would be based on the next generation Clio, due out next year.

It would obviously compete with other retro futuristic designs like the Mini, 500 and Beetle.
Why not? It seems to be working great for the other guys.

Another car we will never see as Renault has announced a few days ago they are not planning a return to the US.