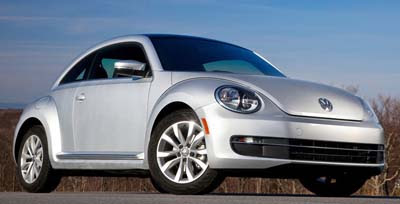 We new this was coming. The return of the Diesel Beetle.
Which is good news.

Which is not good news as the MPG rating. 29 in the city but only 39HWY.
Which is less than some other small cars. And diesel, at least where I live, is about $1 more a gallon than regular.
Still, what you get is 236 pound feet of torque. Which is unmatched by the competition.
And, I did get over 53MPG on the HWY when I test drove the Golf TDI. A car rated at 42MPG.
So real life numbers could be much higher than 29/39.

The TDI will also be available in the convertible version coming out soon.