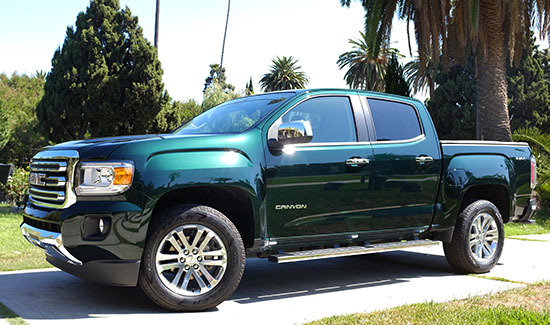 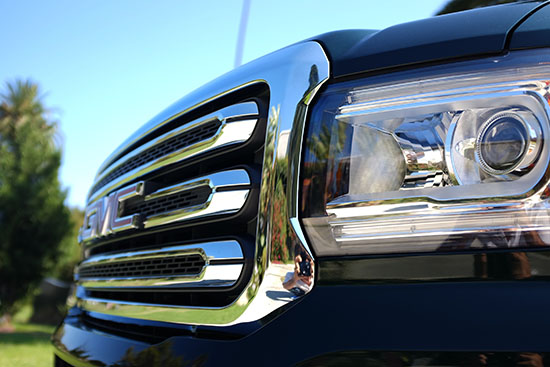 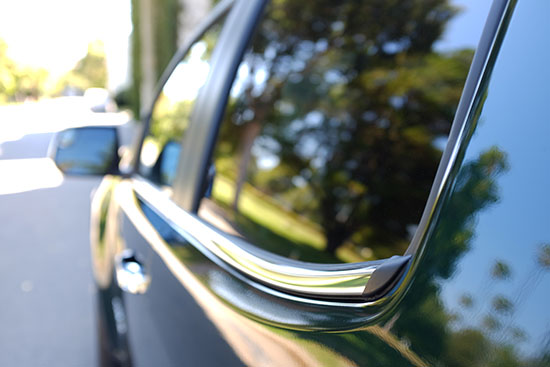 After a week driving the big Silverado, I was wondering if the smaller Colorado/Canyon would make more sense.
I mean, the Silverado is fun (kind of…), but it is quite a chore to drive around in the city.
And that horrible ride on the freeway…

So GMC sent me a loaded version of the new Canyon.
I think it looks great. (Especially with the Emerald green color, a $495 option).
And the oversized GMC grille seems to work on the smaller truck.

Even though it feels like a compact after driving the Silverado, it’s not. The “short bed” version I had is still over 10 inches longer than a Chevrolet Impala.
A long bed is available and that adds another 12 inches!
Plus, at least my AWD model, it is really high. Almost a foot taller than the Impala.

So it is still a “big thing” to drive around. It might be “mid sized for a truck”, but still bigger than a full size sedan. 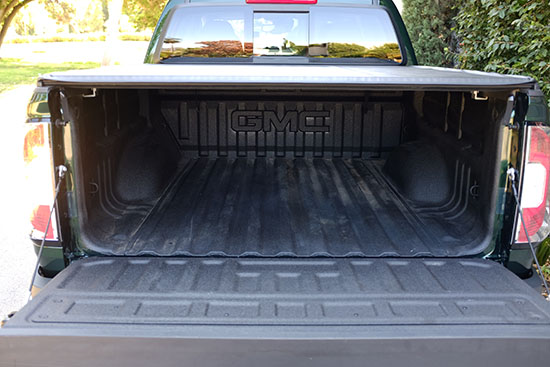 The one GM sent me had a dealer installed tonneau cover. A $615 option.
Which makes this truck more like a car, since now you have a lockable trunk.
But it’s not that easy to remove when you need to carry big things. (Which is kind of the point of a truck..) 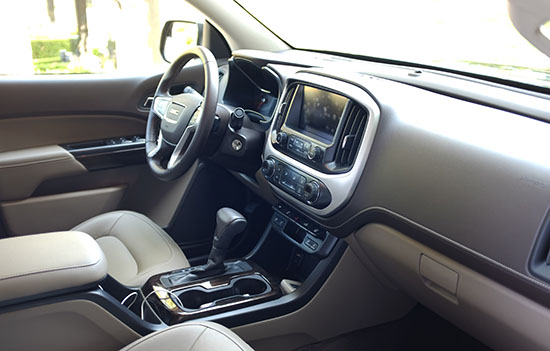 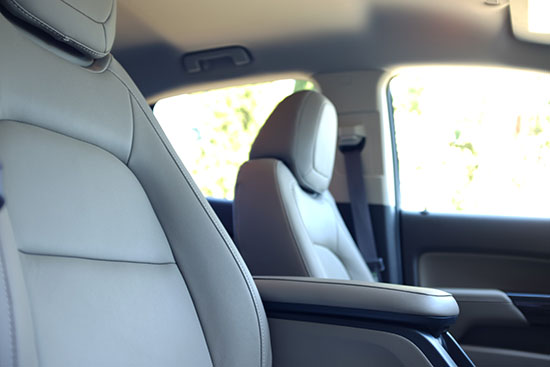 Inside, it feels much more like a car than the Silverado. Mostly because of the console and the shifter between the seats. But also the “more normal” size.
Everything looks nice and simple. And it all feels very solid. (except the turning signal stalk)

The optional Bose stereo sounds good. But still, to me, not worthy of the Bose name. (It’s not better than some really good base systems.)

The seats are very comfortable. 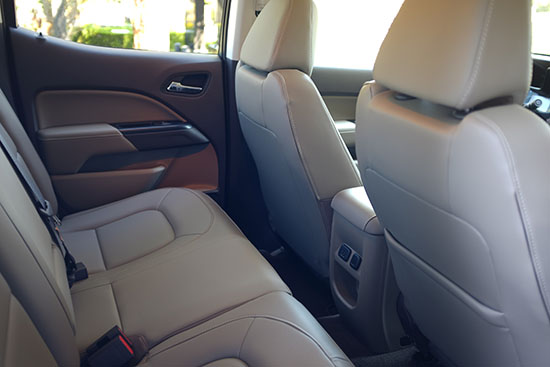 The back seat is pretty roomy. But not nearly as much as in a (shorter) large sedan. 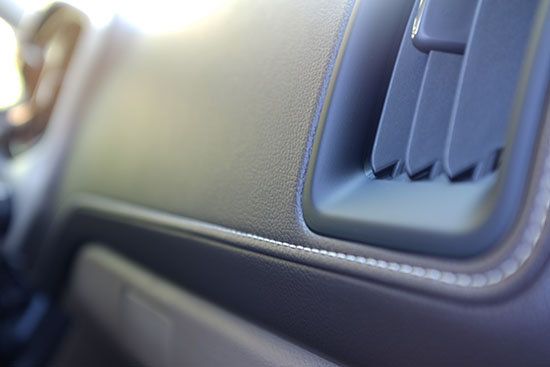 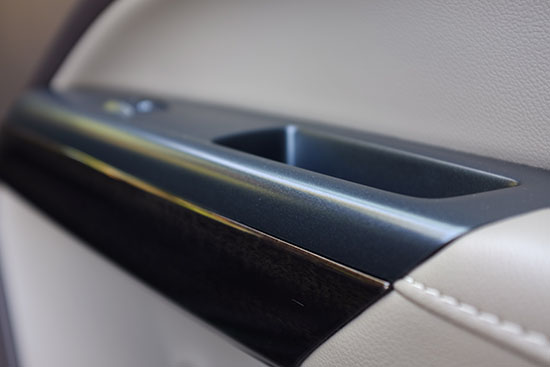 The whole thing is very nicely finished. It’s not luxury sedan level, but it doesn’t pretend to be. 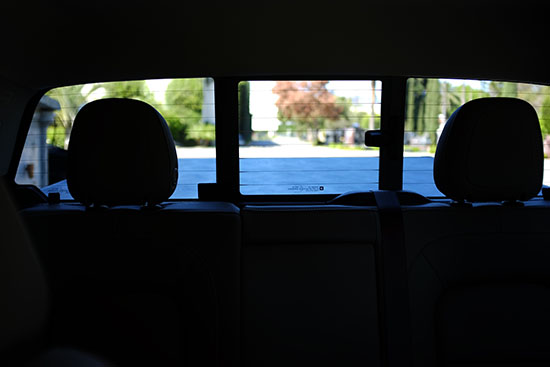 The 1st thing you say when you turn around is “Thank God for rear cameras”. (As a matter of fact, you’ll say it every time you turn around)
The top of the headliner is really high. And without the camera, it would be really tough to see a car.
A pet, ot a small child. 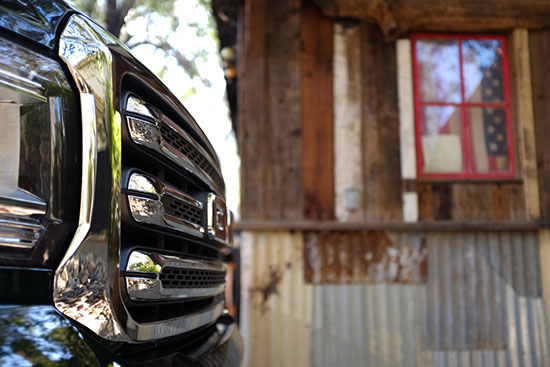 The first thing I noticed was how much nicer the ride was, when compared to the 2 door Silverado.
It is still trucky, and even a bit hard sometimes. But that’s expected.
It is just fine for every day use.

The V6 is pretty quiet. Although not as super quiet and smooth as the big 4.3 Liter from the Silverado.
It does a great job moving the truck around in the city.

But things do change when you get on the freeway. For some reason, it seems that most of the 305 horses from the 3.6 Liter engine are taking a break. A very long break…
Combined with a transmission that doesn’t really like to downshift, and you get a very frustrating experience. You basically have to push it most of the time to move.
It’s really bad on long hills. Where the whole thing feels like a 4 cylinder.
(I cannot imagine what the actual 4 cylinder is like.) 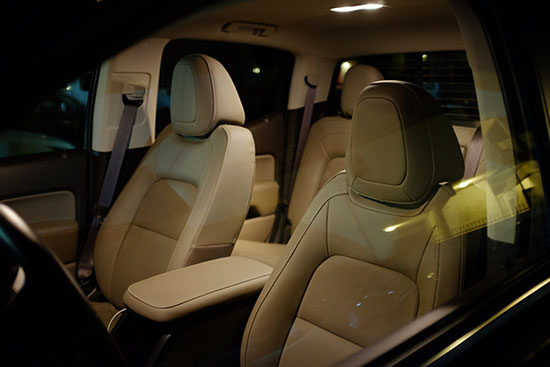 The version I drove was loaded at $41 785. Which, at first, seemed really expensive to me.
Until I compared it to the 4 door loaded Silverado (High Country) I drove last year. With pretty much the same equipment (plus a V8 of course). It was $52 000.
Mileage was 14/20.
So by going for the “small guy”, you are saving about $10 000. And even more on gas.
Sure, the High Country is roomier and carries more stuff.

But for most people, I think the Canyon/Colorado is really the way to go…