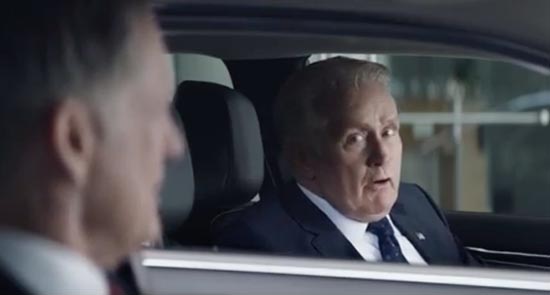 These are some of the saddest car commercials I’ve ever seen. I don’t mean to blame the actors. It’s not their fault, really. (Except accepting that job)
But the idea is horrible. The writing should be punished.
Jokes don’t work. You can tell it wants to be funny but it’s not, etc…
The worst.
Plus, we can’t even see the cars?! All they talk about is patriotic/election/fake politics BS.
Not really enough to actually sell a car.
Who is this even for? I mean who wants to buy a new car from two old guys pretending to be the president?!?!

After announcing the premature death of the Chrysler 200, now they advertise it???
Who is going to actually buy one now?

And that poor “5 years old” 300 sedan has no replacement in sight.
They were supposed to be working on a next one based on the new Giulia platform.
But the Alfa has had many troubles lately. (Weird handling, not passing internal crash tests etc…)Due to “Crazy Marchionne”s mandate to come up with a brand new platform in just 2 years.
So now it’s late. Very late…
(Since he blamed the designers for the 200, he’ll probably blame the engineers for he Giulia.)

As I mentioned before, I think Marchionne’s goal is to kill Chrysler/Dodge, and sell Jeep/Ram to someone else. Anyone. As long as they give him money for it.

It is sad to see such lame commercials trying to sell what are very decent cars.
Cars doomed by the crazy guy running the company…

But!. To make everyone feel better, here are some GREAT old timey Chrysler commercials.
Cool cars with a cool actor! And you actually see the car! They were proud of it!

Back when the guy in charge actually cared.