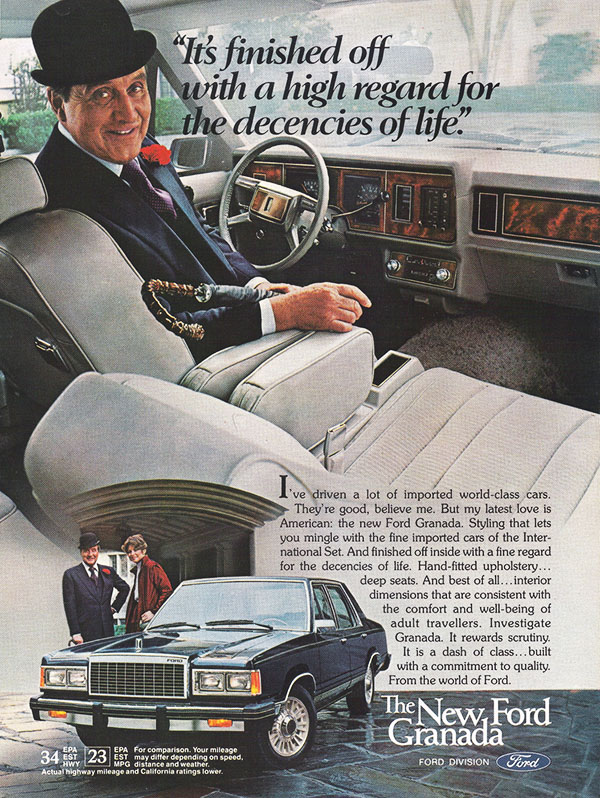 We all know (either heard of or actually remember it) the Ford Granada.
But the one we usually remember is the 1st generation.
I just found out (yes, 35 years after the facts)  there was actually a 2nd generation.
One that lasted only 2 years. Based on the, then new, Fox platform.
While the first one had a little bit of personality in its design, the second  one had absolutely nothing.
It looked like the most generic car ever designed. Something out of an architectural rendering.
Which is quite amazing …
And also part of the charm. It’s kind of rare, and invisible at the same time.
Plus, the ad above featured John Steed from the Avengers! (Actor Patrick Macnee, actually dressed as the famous character!) I guess in an effort to imply the new Granada could actually be compared to a Jag.

And here is the ad for the car. So you can see how forgettable that thing was…

But wait, there is more!

This guy actually found on in perfect condition, back in 2011. With only 30 000 miles on it.
The video is annoying since he can’t even hold the camera properly. Or mention anything that matters.

Still. I guess there are some people around crazy enough about these cars to keep them around in mint condition…

So….What is your favorite “forgotten car”????