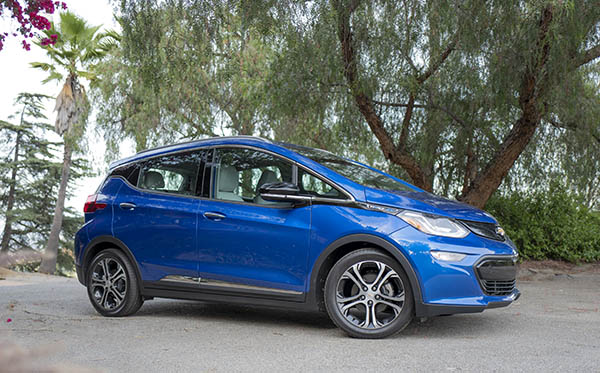 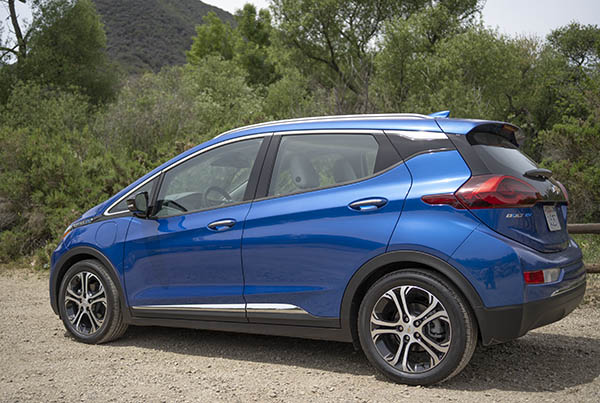 I do like the design of the Bolt.
It has a fun and friendly personality. Sure, some details could be toned down (Like some of the chrome bits)
And the original concept did look a bit nicer (Especially that really cool glass roof)

Overall, it reminds me a bit of the Honda Fit. (Except better looking than the current generation) 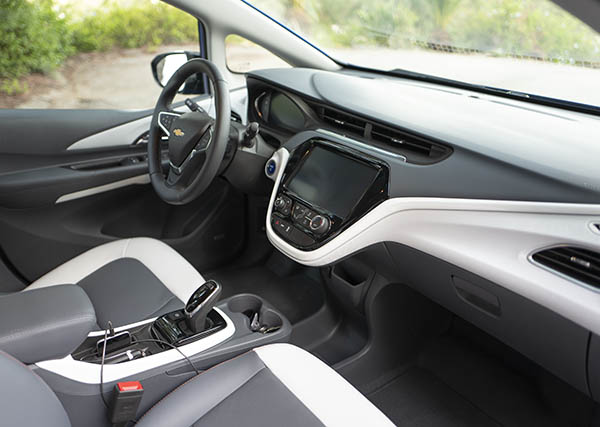 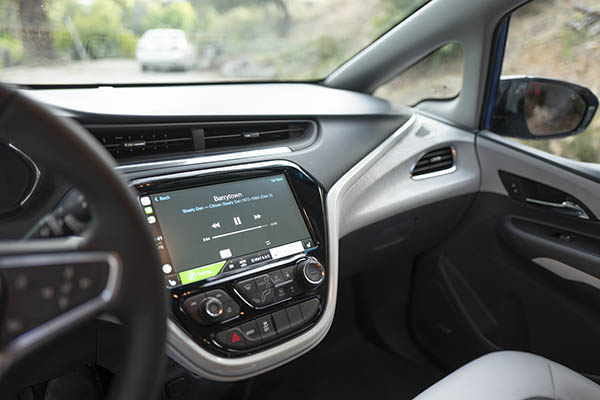 The interior is very roomy with an open feel.
Visibility is pretty amazing. In part due to how high the seating position is. (And the design of the front windows)
It is actually pretty surprising. (You don’t really realize how high you sit until you drive next to other cars and SUVs.)

Everything is solid and well put together. Although nothing has a luxurious feel.
But it looks really modern and inviting.

Coming out of a Honda Accord the previous week, the infotainment of the Bolt did
not feel as intuitive as the Honda at all. (And, a few times, it wasn’t as responsive. )

But after a while, everything works fine… 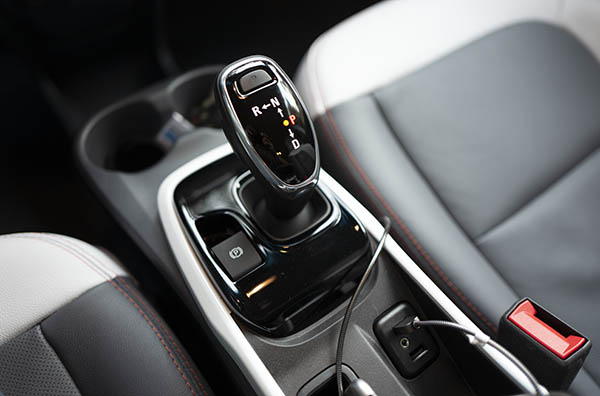 I will again complain about the electronic shifter. Which is the exact same one used in the Enclave I tested earlier.
Not the most intuitive design at all. And a bit annoying to use.
Especially in the Bolt, I would expect something different. 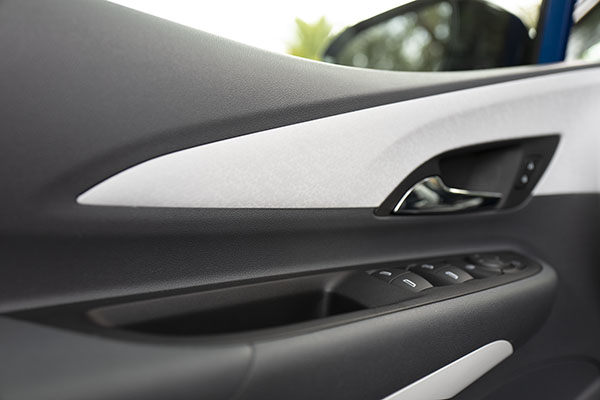 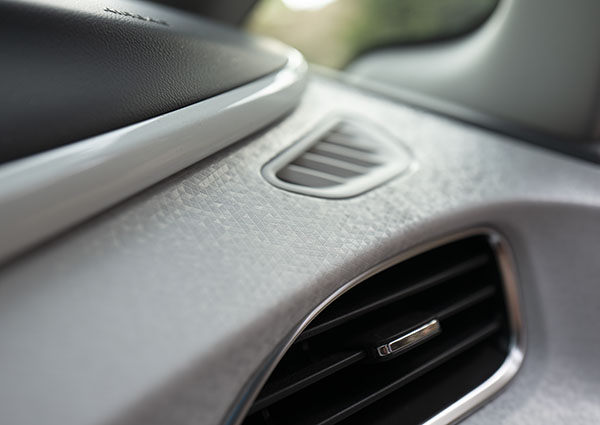 The dash is covered in a strange/interesting texture. Which, at least, is quite a nice and original touch. 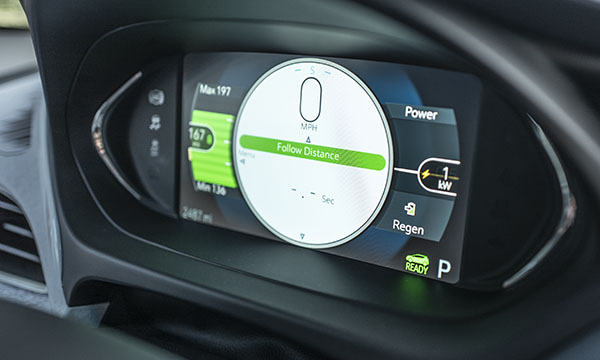 The main screen is very easy to use and read. With a giant speedometer in the middle. 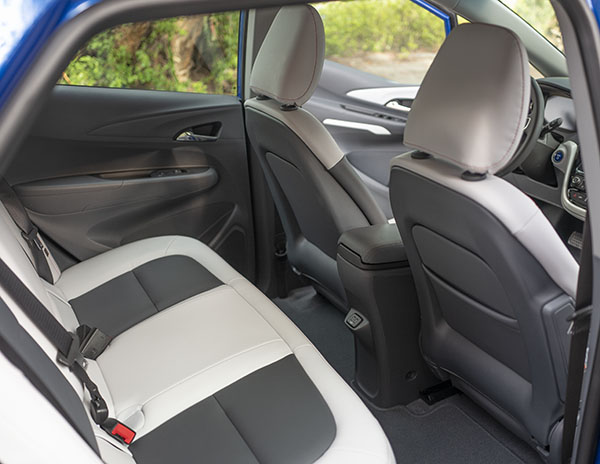 The back seat is quite roomy and very comfortable. 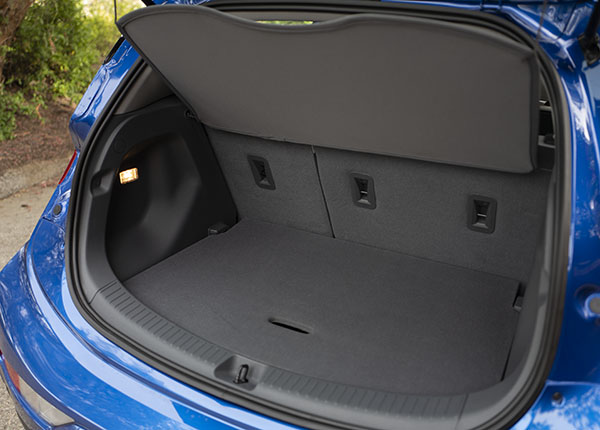 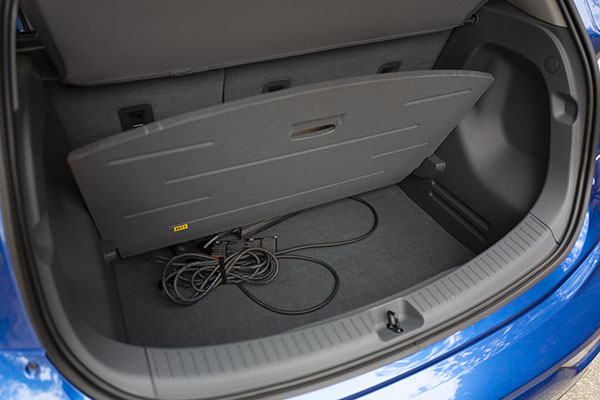 The roomy truck has a cool hidden compartment under a solid cover. 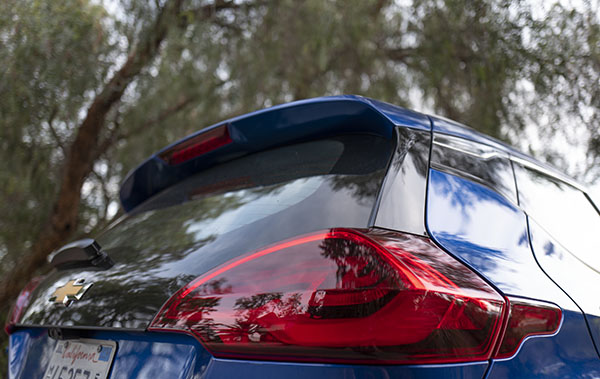 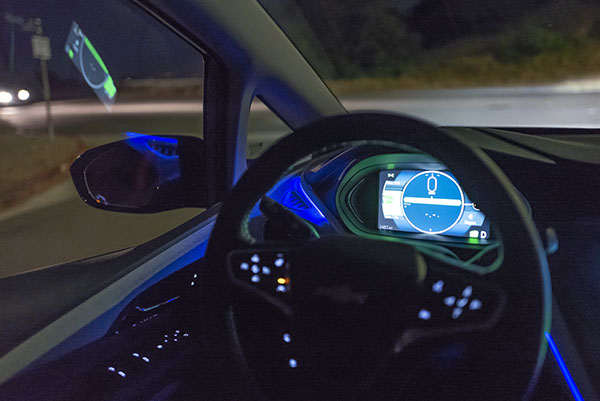 As I mentioned, I was surprised how high you sit in the Bolt (Even with the seat at its lowest position)
Which is not my favorite. But these days, most people seem to like a high seating position.

One thing I also noticed early was how much of a light show the dashboard is at night (Of course you can dim the whole thing)
But most of these lights end up as reflections on the side windows, which can be distracting at first. 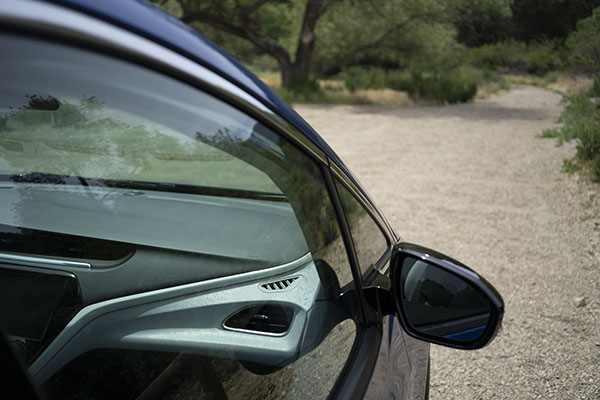 Like most EVs, the Bolt has plenty of power.
And becomes really, really quick in the “sport” mode. (Tires will chirp)

The steering has more feel than I though it would. Which is nice.
The suspension is on the firm side, but also very smooth in general. And road noise was mostly very low.
So you get the usual super quiet EV ride. And the whole thing always feels very solid. 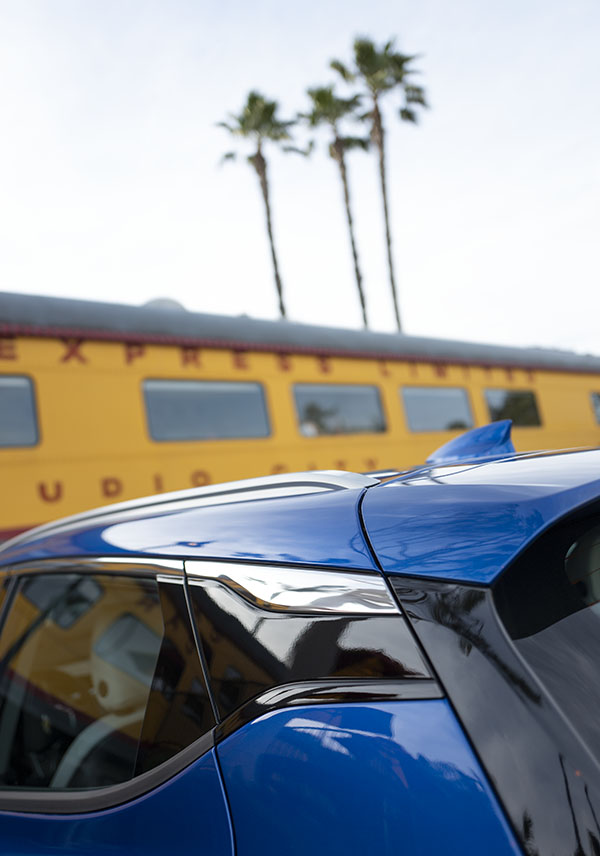 I noticed a few times that the Bolt was actually pretty sensitive to side winds. Probably because it is quite tall.
Not only side wind, but also to cars and trucks passing by when you are parked along the road. 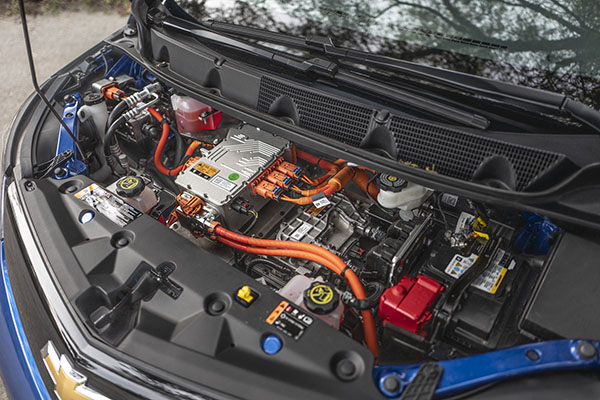 The Bolt has an official range of 238 miles.
I never used the whole thing since I recharged it overnight a coupe of times.
(Using a regular 110 outlet)

Once I drove for about 80 miles and the charge only went down about 40 miles.
It happened a few times. Which leads me to believe you could probably squeeze more than 238 miles out of a full charge. 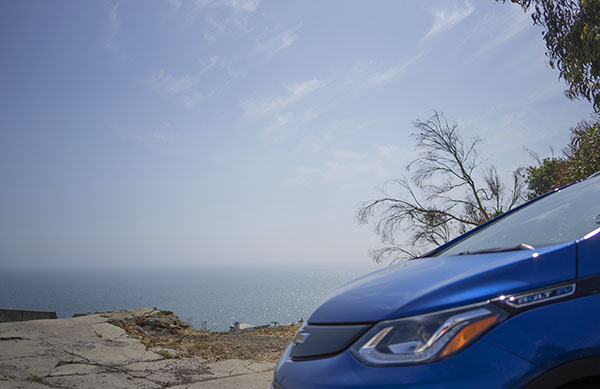 I have to say that I was really happy to finally be able to drive from Hollywood to Malibu (and back) for the very first time in an electric car.
I even took the long way, through Mulhauland drive, and there was plenty left on the charge when I got back.
No “range anxiety” at all. 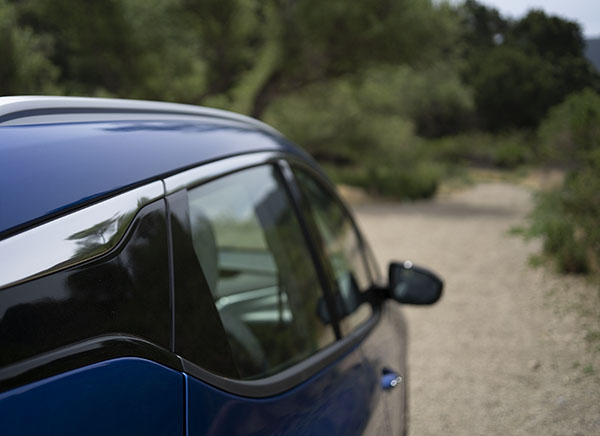 The Bolt is a just a very nice car to drive. EV or not.
It is very roomy, has a solid feel and has more power than most people will ever use.
And it is fun.

I think its only problem might be the price.
Of course, for now, all EVs are overpriced compared to what they will be in a few years. That goes for any new technology. ( I remember the $15 000 32 inch plasma TVs…)

But at over $43 000 (Before incentives of course), the Bolt has some serious competition from the Tesla Model 3.
A Model 3 with the luxury package (Upgraded stereo, seats, glass roof and more ) optional wheels and paint (Any color except black is $1000 extra) is still “just” $42 000.
The Bolt is great, but there is nothing upscale about it. While the Tesla (from what I have seen) is a more upscale offering. Also, from a more upscale brand.

The huge advantage the Bolt has is that you can actually get one right now.
Currently, the Model 3 has a “12 to 18 months” waiting list if you order one today.
(Which could very well turn into a 2 year wait)
So for most people, the Tesla is not even an option… 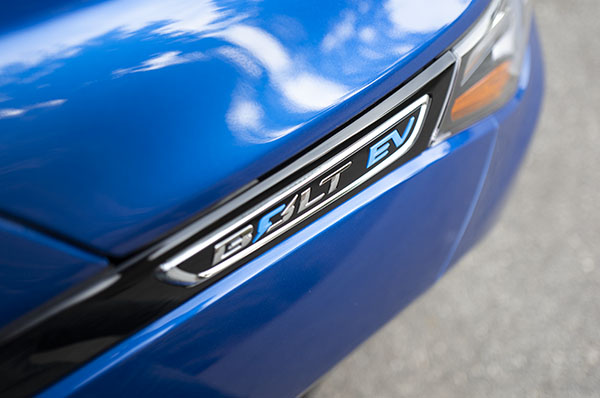 You can also save some money by ordering a more basic Bolt for about $37 000.
It will mostly be the same car as the one I drove.
Compared to the BMW i3, the Bolt doesn’t feel as special and futuristic. But the huge range does make all the difference in real life.
The E-Golf is a much more conservative car. It has a quite upscale interior (just like all Golf models).
But it also feels a bit like an old man’s car next to the “fun” Bolt.
The Golf has always been pretty conservative and anonymous and that applies to all versions.
The seating position of the Golf is much lower (something I personally prefer). And it does drive great.
(test drive HERE)
In its favor, the VW is also much cheaper. Starting at under $31 000.
And the new Nissan Leaf is even cheaper. At under $30 000. For a range of about 150 miles, which is pretty good. (I will try to drive one soon)
But again, the much longer range of the Bolt makes it a superior daily driver. You can actually use it on road trips. If you plan carefully. 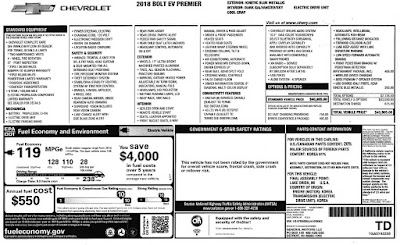 I really enjoyed my week with the Chevrolet Bolt. I was really looking forward to drive one and I wasn’t disappointed.
The EV range was, for the first time, never a problem.

Click on the pic above for all the pricing details of the car I was driving.
It is a roomy, fast and easy car to live with.

And if you need to know more about the Bolt, head over HERE.