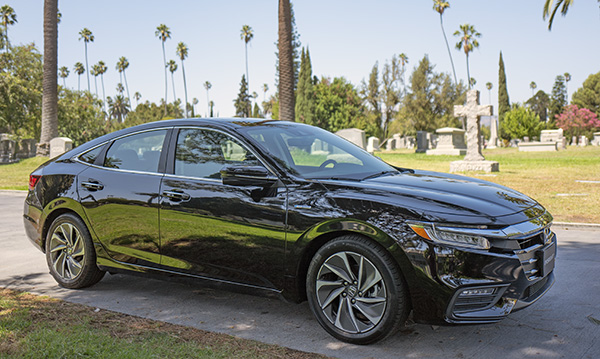 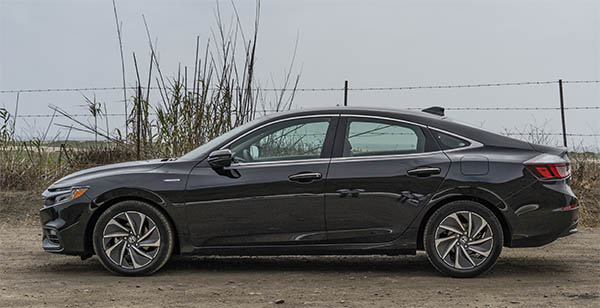 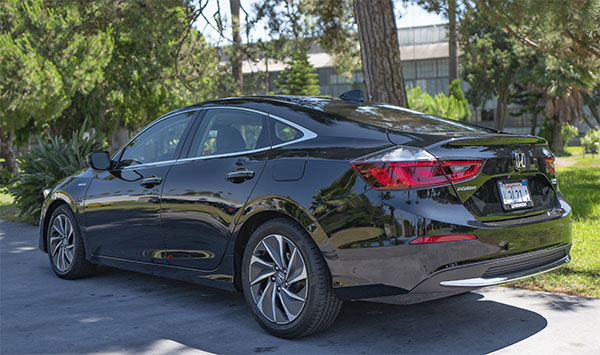 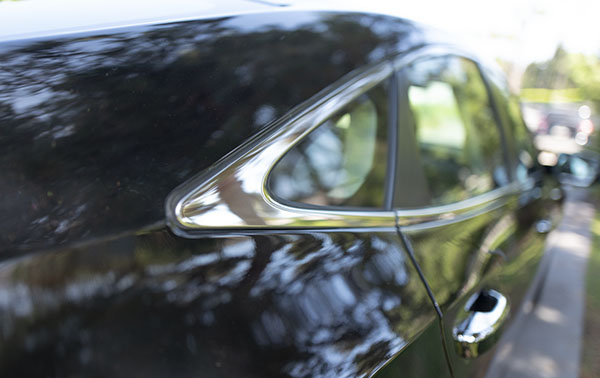 The all new Insight is quite a good looking sedan.
Although it looks very similar to the current Civic, it has a more grown up and sophisticated feel to it.

With less lines, scoops and fake vents.
This obviously caters to a more mature audience. (Especially in black, like my test car) 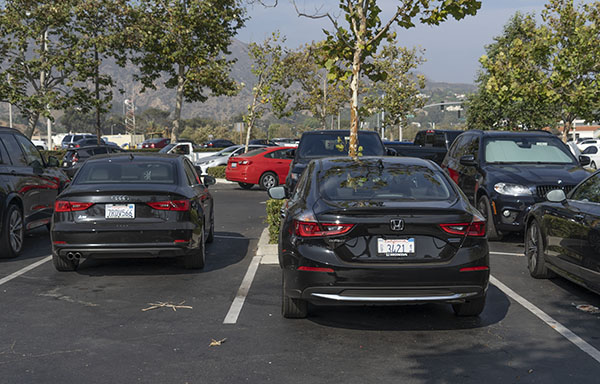 I was actually surprise to see how good the Insight looked in that Malibu parking lot, surrounded by other, much more expensive,  black European sedans.
(I think the Honda looks at least as expensive as the A4 next to it…) 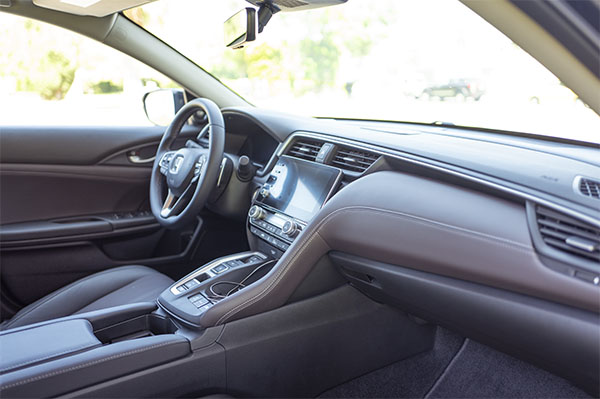 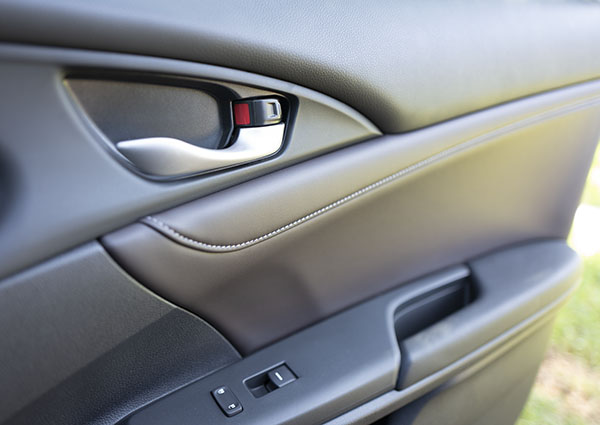 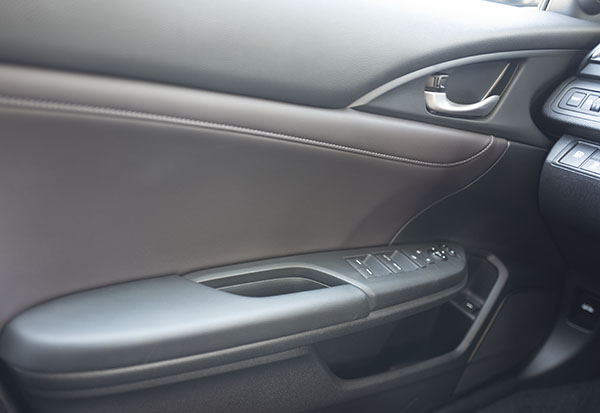 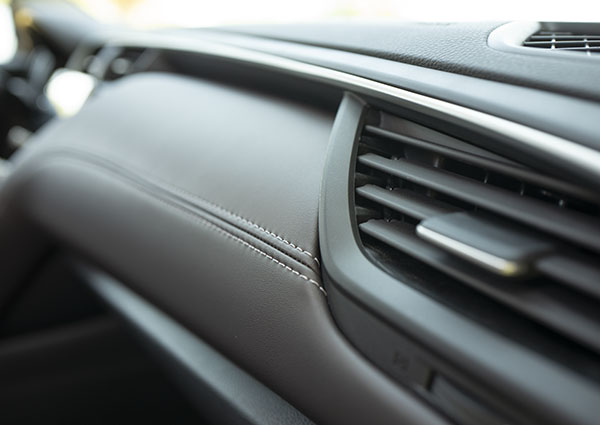 Inside, Honda has made efforts to make sure it doesn’t look like a Civic.
The dashboard does look a bit more upscale and quite different.

The Insight fits between the Civic and the Accord price wise. It is quite a job to make sure it feels and look better than a Civic, but maybe not as great as the Accord.
It does have the really nice and easy to use electronic shifter from the Accord 2.0.
Everything feels nice and solid.
Although the bass from the upgraded stereo on my Touring model was a bit weak. But easy to adjust.
Otherwise the stereo sounds great.

My main complain was the armrest that does not adjust up or down. And it was just a bit too low for me.
I also was not crazy about that “brown interior”. Which is too dark and close to black.
(But they also offer a great cream/black combo)

The driver seat also has no lumbar adjustment. (Which is a strange omission). But the seats are very comfortable and I really did not miss it. 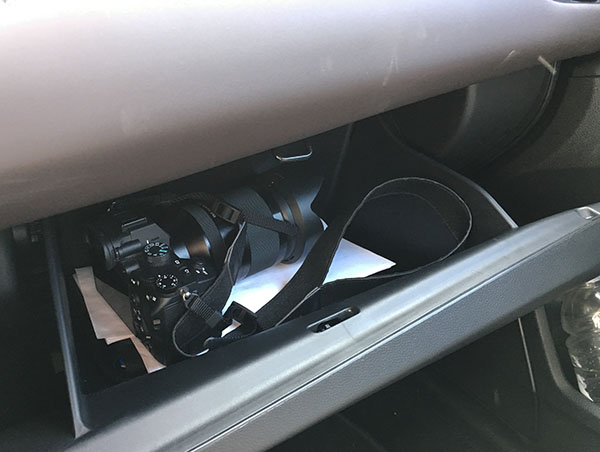 It is also good to see a big, useful glove compartment for once… 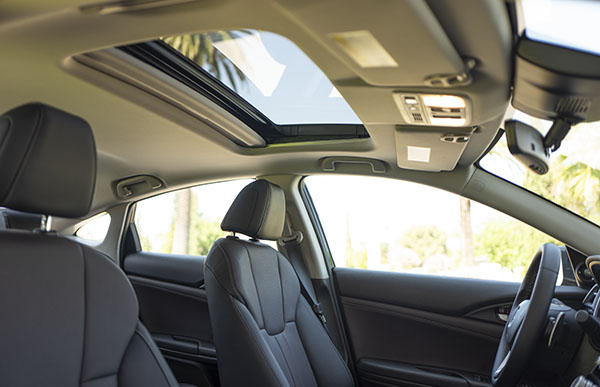 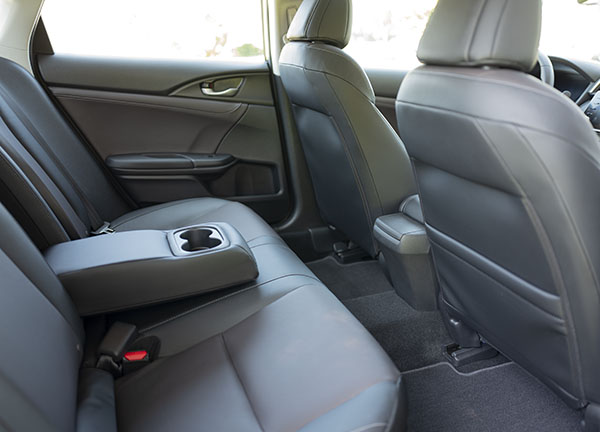 The rear seat is very roomy. And again, comfortable.
Although Honda could have added rear AC vents. Which would have helped make the car a bit more upscale than the regular Civic. 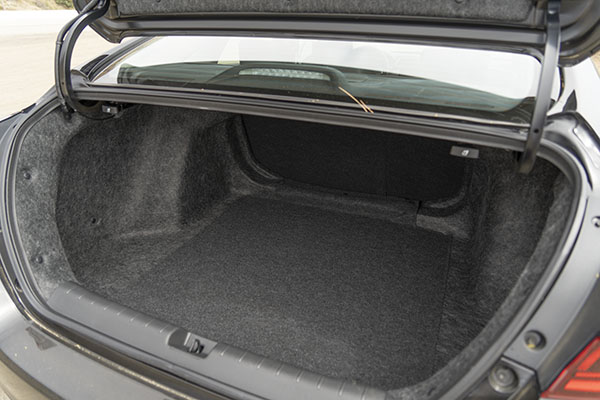 The trunk is pretty huge. Especially for a Hybrid.
Thanks to the batteries under the rear seat. 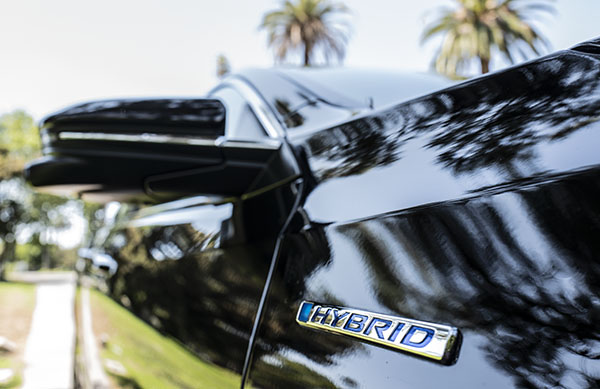 The first impression you get is a great one, from the really nice thick leather steering wheel.
Once you get going, you realize the steering actually has weight to it and a very nice feel.

The ride is always comfortable and solid. The whole thing does feel quite upscale.

The one weird small thing I did notice is how weak the horn sounds. It’s a detail, but still.
I think a horn should be loud, if you’re going to use it to get notice and avoid something, or someone… 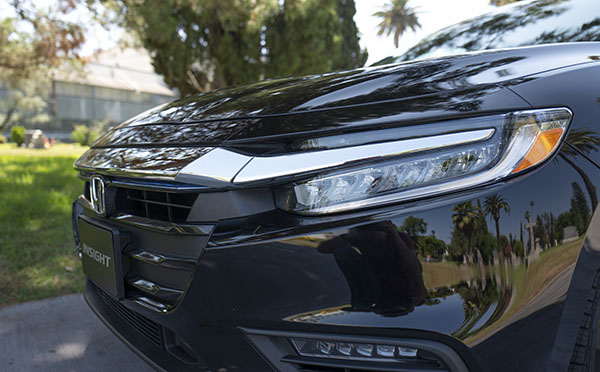 I am not really used to hybrid cars, and was a bit surprised at first about the engine revving so high at random. (Something the Cadillac CT6 was doing as well)

It is actually perfectly normal for the Insight and something you do get used to . And also something you can learn to control . With your right foot of course, but also with the paddle “shifters” around the steering wheel, that control the amount of regenerative braking you are using. 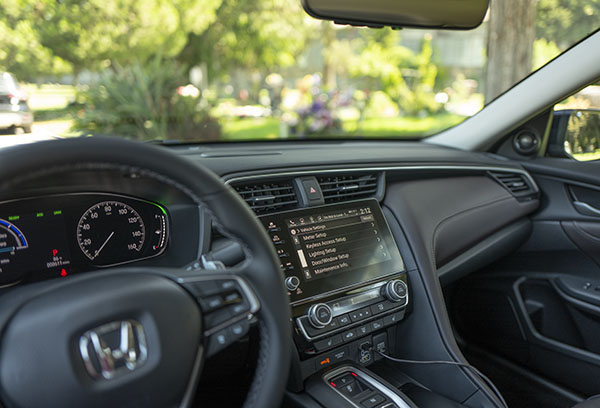 The regular engine is mostly very quiet, and hard to hear when it starts. The car is almost EV quiet when cruising on the highway. (Except up hill when the engine revs up to feed the electric motor)

The “sport” mode is actually a real sport mode, for once.
There is a really big difference when it is turned on.
The car is much quicker (although it is not slow in “normal” or even “eco” modes)
It feels more like a full EV with much more torque available.

The only complaint I have about it, is the fake “sporty” sound that comes with it. It just sounds cheezy, not sporty. And I really don’t think anyone interested in the Insight actually wants that in the first place… It would be fine if you could turn it off.

But, the extra power is great and super responsive. That sport mode is really fun to drive and really transform the car. 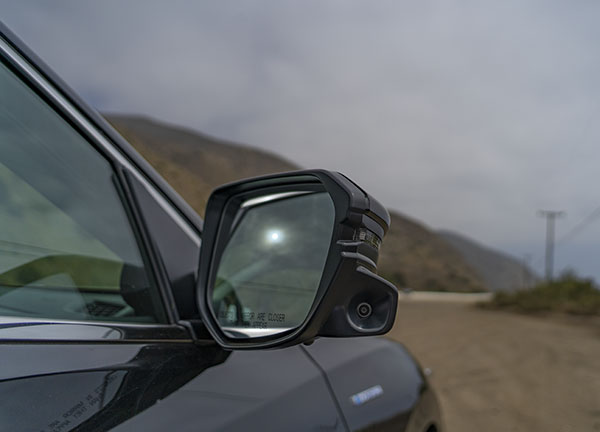 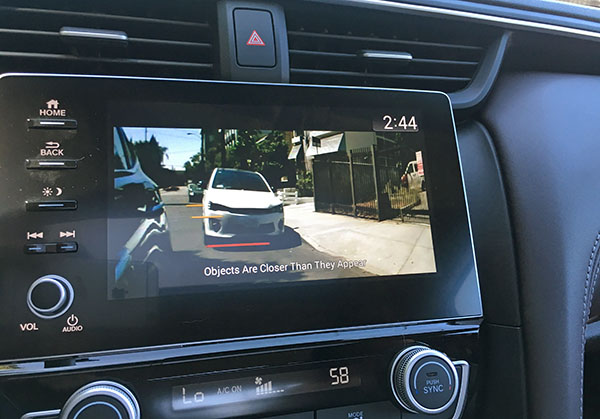 The Insight comes with Honda’s Sensing system. Which includes what they call “lane keeping assist system”.
Which is basically a side camera. Every time you use the turn signal, the screen switches to a picture of the side of the car.
(Which I found distracting and just turned off after a while.) 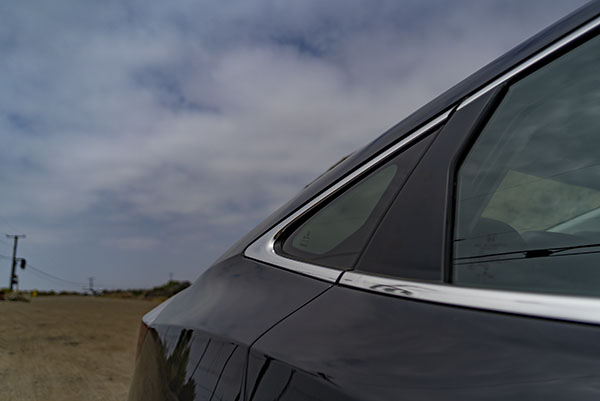 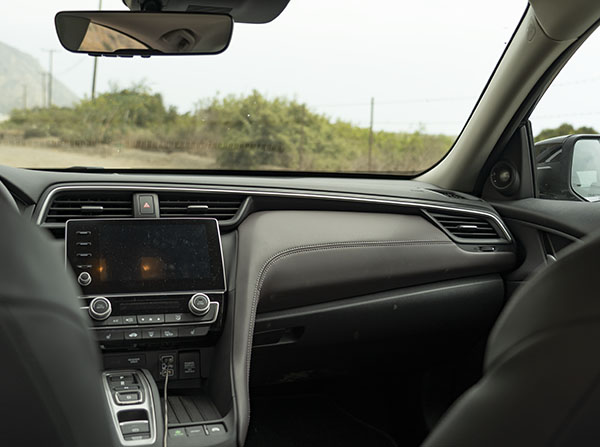 The main point of any hybrid is the gas mileage.

On average, I always got at least 50 on the freeway. (55 on my Malibu drive) And actually was able to get almost 65 on a long return drive which was of course mostly flat, and some downhill.

Like other hybrid cars, mileage can vary a lot.
I drove the Insight like what it is: a hybrid sedan. Like most buyers will. Not like a sports car.
I was never slow but observed speed limits. I always kept up with traffic. Even used the “sport mode” quite a bit.
And found acceleration from a stand still was very good in “eco”and “normal”. (And great in “sport”)
The car never felt too slow, like the Prius does…

In a quick test drive, potential buyers might be surprised, or even put off, by the sound of the sudden engine revving. But as I mentioned earlier, this is something that you not only get used to, but also learn to control after a while.
Like all hybrid cars, there is a bit of compromise.
I think a little noise once in a while is a great and easy compromise for such great gas mileage. 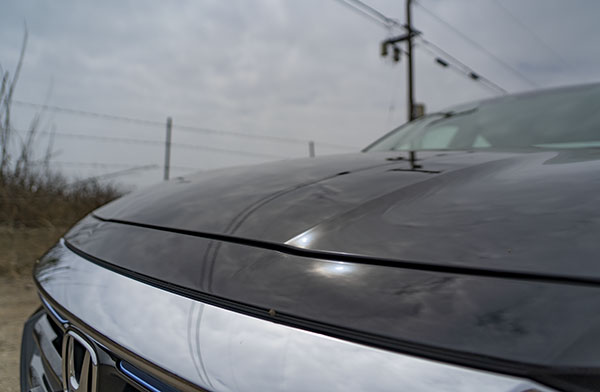 The new Insight is  a very nice sedan.
The amazing mileage is just icing on top of an excellent car.
It is roomy, very solid, drives great and looks good.

When compared directly to an equivalent Civic, the Insight Touring is only about $1200 more.
(Gone are the times when a Hybrid version of a car was at least $5000 more)

The Turbo Civic is rated at 31MPG City and 42 Why.
The numbers I got were much better with the Insight.
So that $1200 difference would actually be worth it.

Sure, there are few things Honda could have done to make the Insight a bit more upscale or special next to the Civic. Like memory seats, lumbar adjustment, rear AC vents, a glass roof or even a hatchback.

Still, the new Insight is its own car. It is even roomy enough to compares with some mid size sedans out there.
And is priced very well.

Unlike many other hybrid models out there, the Insight is for people who actually enjoy driving.
A great, fun to drive sedan that happened to get me almost 60MPG in the city and over 50 on the freeway. 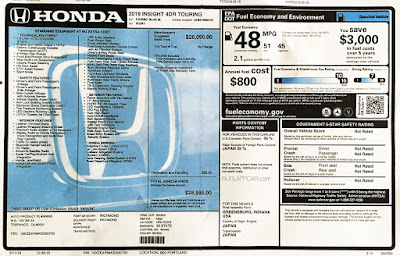 Click on the picture above for all the pricing details of the Insight Touring I was driving this past week.
(Although they gave me a different car. Since mine was black with a brown/black interior…)