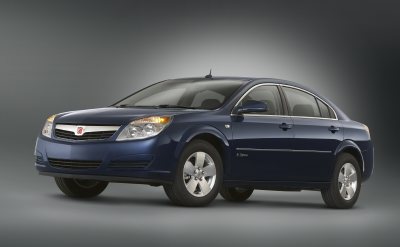 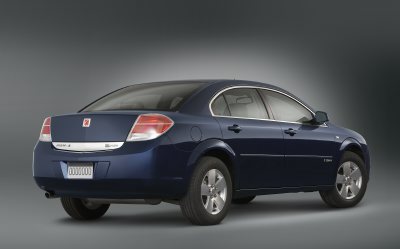 What a disappointment this one is.
he hybrid system in it doesn’t allow for the car to run on the electric motor alone. Unlike the Camry or Altima.
So gas mileage will only be rated at 25 city and 36 Hwy.
A regular Camry gets 24 and 33. And it costs thousands less than this Aura Hybrid (Which will go for around $23 000)

Sure it is less than the other mid sized hybrid out there, but the mileage sucks.
What is the point of this really?
I would call this a pathetic attempt to get on the hybrid bandwagon…

By the way, I sat in a couple of Auras this past week end.
first impression was great. A pretty impressive looking car in person. Inside, it does look a bit busy and the fake wood seems to be everywhere.
But even that isn’t that bad.
Things get worse when you start grabbing things. The door armrest feels very, very cheap and actually almost came apart when I was just pulling it a bit. The center console also feels very cheap and shaky.
And doors don’t feel solid when you close them.
I must say I was very disappointed.

On another note, I just sat in a 2007 Altima today and that was quite the opposite experience.
Even the cloth looks and feels great. Impeccable fit and finish. Everything feels solid well made.
And the interior is really a nice place to be.
What a nice car…