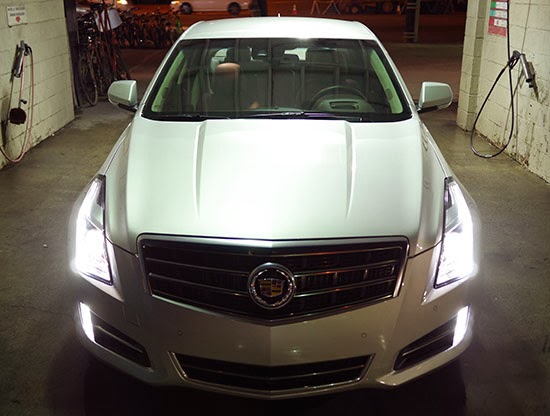 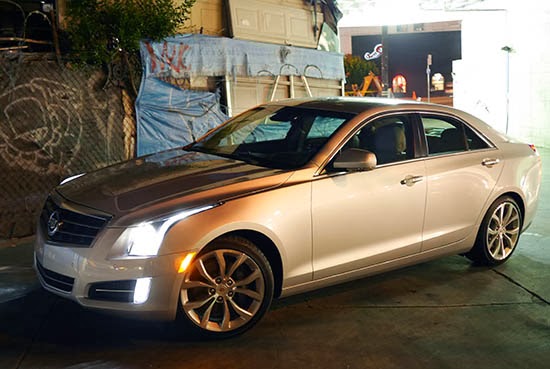 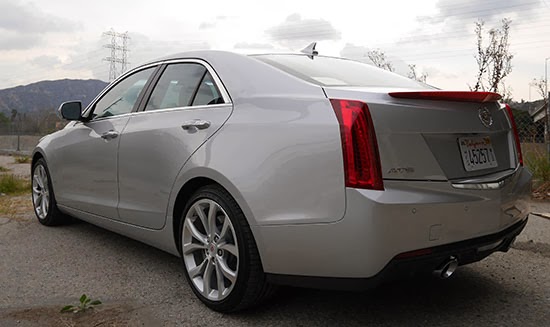 I have to say, I thought the ATS was really boring when it fist came out.
Nothing new. And the grille was especially uninteresting.

After living with one for a week, I have some different thoughts.
Yes, it does look quite conservative in general. (And that grille is still quite boring )
But there are so many interesting elements. The headlights, the rear deck lid, the sharp lines.
It actually looks quite nice and does have some presence.

Although I must say, all my younger friends in their late 20’s and 30’s did describe it as “an old man’s car”. (Older people were more impressed.)
The younger crowd does relate more to the Audi A4 or the 3 series. 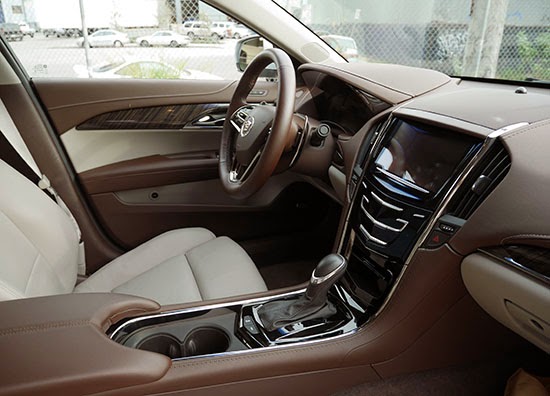 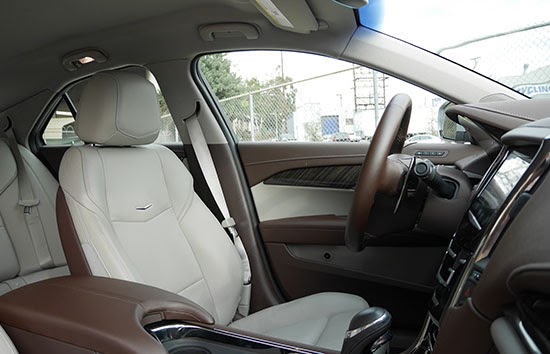 Inside, my first impression was quite negative.
Due mostly to the choice of color in my test car. A combo they call “platinum with brownstone”.
Brownstone is fancy for “reddish chocolate color”. And it does NOT go with light grey. At all.
(A much better “grey/black combo is available)

The front seats are very comfortable. But the transmission tunnel is really wide and intrudes into the leg space, for both the driver and passenger. So the whole things ends up feeling small, and not that roomy.

The Bose stereo sounded great and I didn’t have any problems with the Cue system. Which is basically the same thing as in other new GM models. With the same menus.

BUT… There are no switch or buttons whatsoever. Which really sucks.
There should be at least one for volume ( I don’t remember  anyone complaining about a dial for volume control).
It just feel like old people’s idea of what would look cool in a car.
Sure it looks good. But it drives you crazy. And the artificial haptic feedback always feels like the screen is loose or broken.
It is just a major pain that needs to be corrected ASAP. 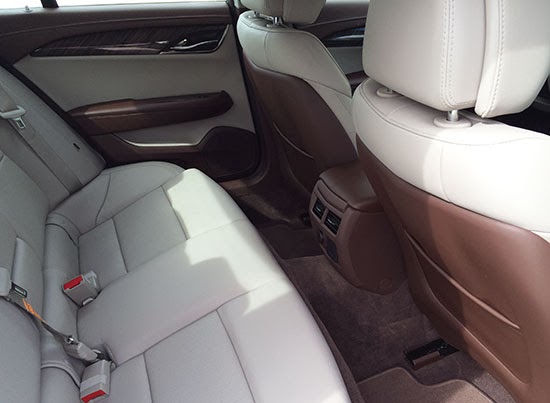 The rear seat is quite small. Which is a problem is most fancy RWD compact cars.
It is on par with the class I guess.
And there are only vents for the air, but no controls.

And again, that tunnel is pretty wide, so this is in effect a 4 seater car. 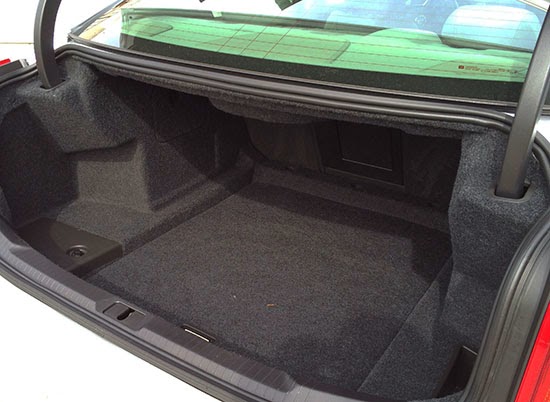 The trunk is fine but not that roomy. 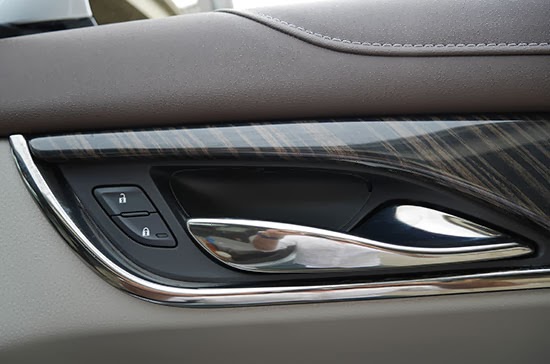 Some details inside are very nice. Although the wood didn’t look that real to me. With its tiger looking stripes.
The metal trim is quite nice. 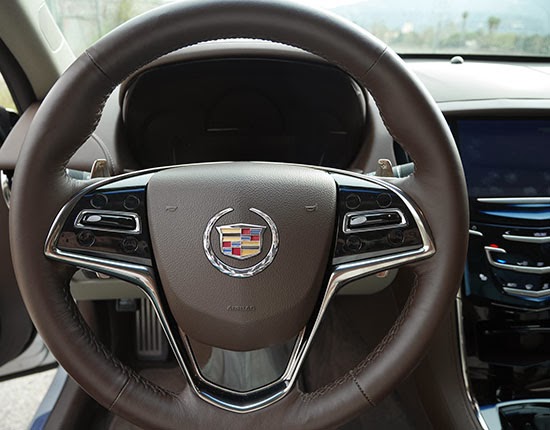 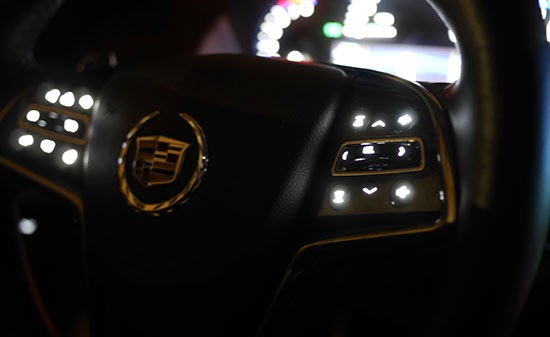 The steering wheel looks good.
But seems to have too many controls that are not really needed. And they are all lit at night. All the time. Which is just too bright and distracting.
(You can lower the brightness level of all the interior lights, but not just the ones on the steering wheel.) 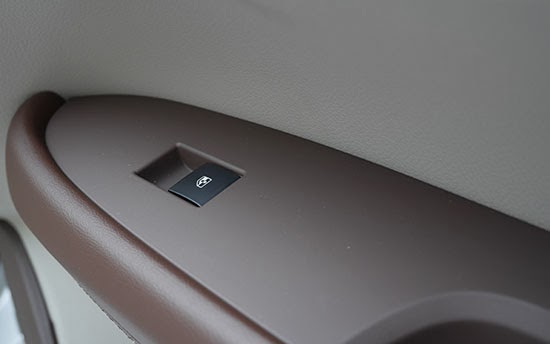 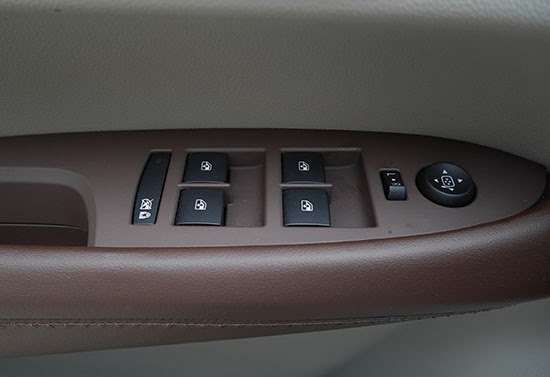 My test car was the loaded V6 version and retails for over $48 000.
For that price, I was quite surprised to see quite a few cheap interior bits.

Like the power window controls and the plastic surrounding them.
The whole thing is more at home in a Chevrolet Cruze than a “almost $50 000 Cadillac” 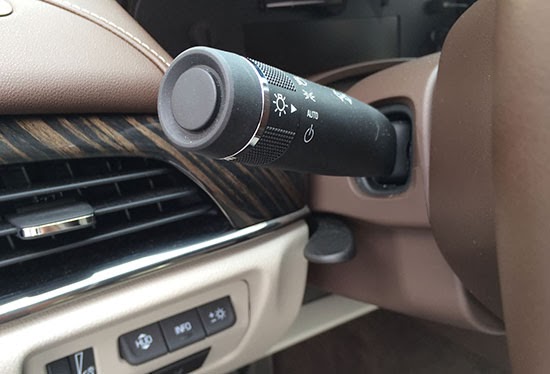 Same for the control stalks, which are pure generic GM parts. They are not bad and feel pretty solid.
But they are also the same ones used in the $17 000 Chevrolet Cruze, and most other GM models.

And, as you can see on the pic, my $48 000 car did NOT have power control or memory settings  for the steering wheel. This is really bad… 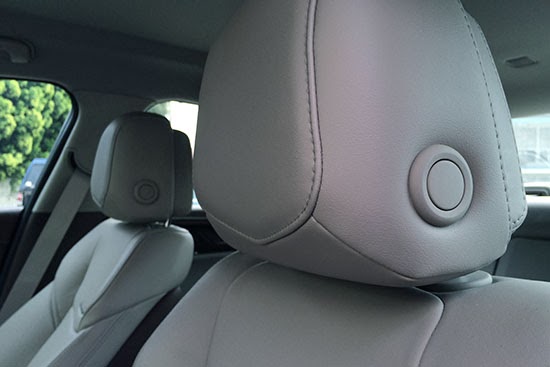 Again, the headrests are fine and comfortable, but also from the Chevrolet Impala. 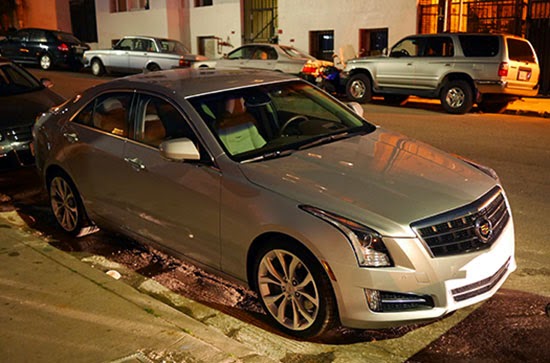 Once you get in, you realize you are sitting pretty low. Like in a sports car.

The roof is also pretty low, so you can’t really move the seat up that much.
It all feels more like a sports car than a luxury one.

Under way, I was surprised how firm the suspension was. (On the regular setting)
Even though I did get used to it after a day or so, I still think this should be the “Sport” setting.
The regular mode should have a smoother ride. (This might also be due to the run flat tires on my test car)

The steering is very nice and gives plenty of feedback without being too “twitchy”.
I couldn’t feel much difference between the “Touring” and “Sport” settings. 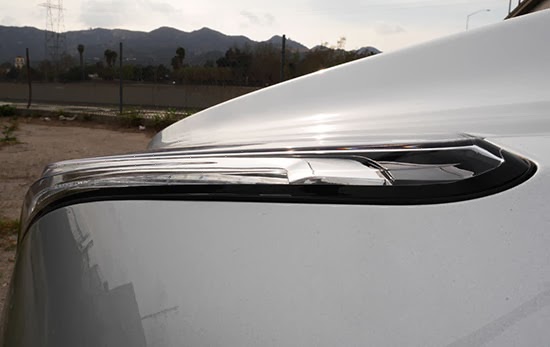 The engine has plenty of power Acceleration is strong and smooth all the time.
Although it doesn’t give you that kick in the pants feel.

The V6 sounds very quiet yet very sporty when you push it.

It is officially rated at 18/28MPG.
Driving like grandma I was able to get 18 in the City.
(But like most big V6 engines, it mostly gets about 15/16 when driven normally.)
And I did get 30 on the freeway. 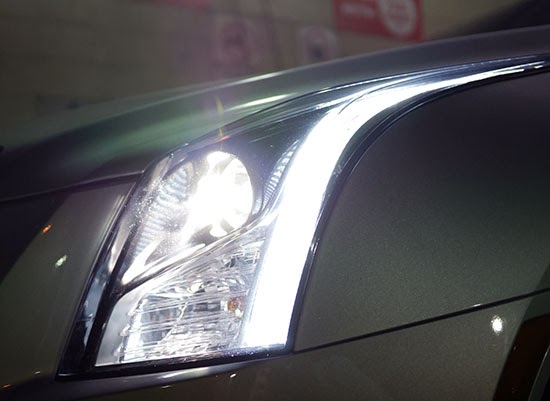 It does have a manual mode with paddles, but it is really not needed.
As the transmission always seems to be in the perfect gear.

One small detail I noticed was the automatic high beam feature. Which dim the headlights back to normal as soon as another car shows up.
A very nice and useful feature. 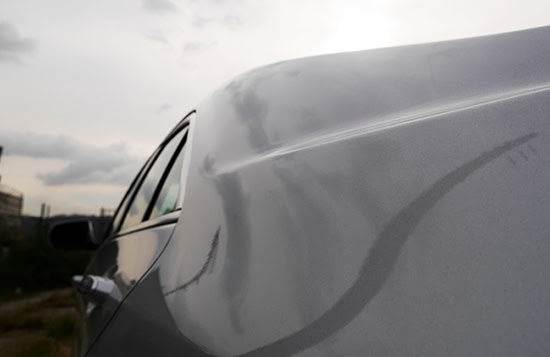 The ATS V6 is a very nice car. And it does have that super solid tank feel of many expensive German cars.
But I am not as crazy about it as some other people who drove it.
Too me, it feels closer to an Infiniti than a European car.

.Despite its smaller size, it still doesn’t feel young.
.The ride is much too firm in its regular setting(At least on my test car)
.Some interior bits do not belong in a $48 000 car

It is a very sporty car. Sportier than it is luxurious. As such, it seems that it is has the wrong body.
That this chassis should be used in another car. Like maybe the next Camaro.

Because of this, I think the upcoming 2 door ATS Coupe might be a better car. More in tune with the spotty character of the chassis and engine.
As the back seats are really small anyway.

So no matter how expensive the ATS is, it is still between $5000 and $7000 cheaper than its closest competition.
(But BMW and Mercedes don’t have access to cheaper bits to cut down cost either.)