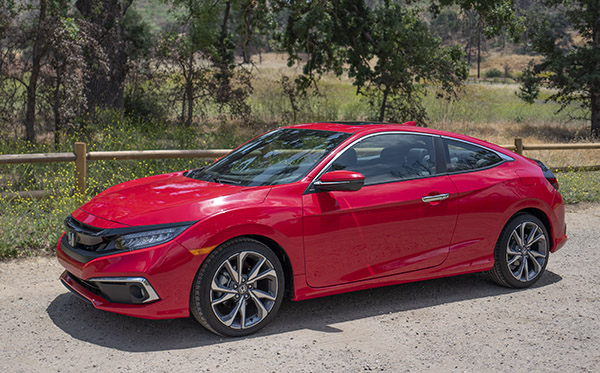 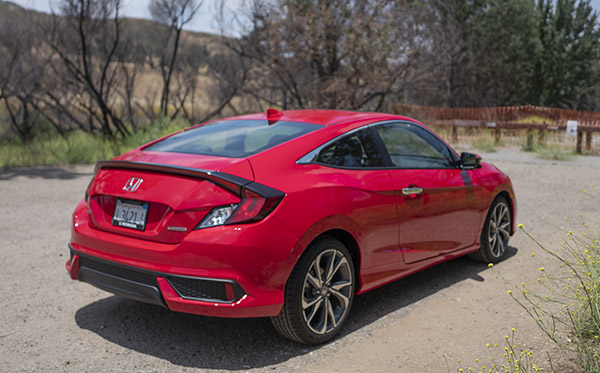 After almost 4 years, the current Civic is still one of the best looking compact cars around.
And it is really good to see that Honda has not abandoned the 2 door coupe version.

For 2019, Honda has redesigned the front and rear bumpers, mostly. Things are cleaner and simpler than before, which is good. 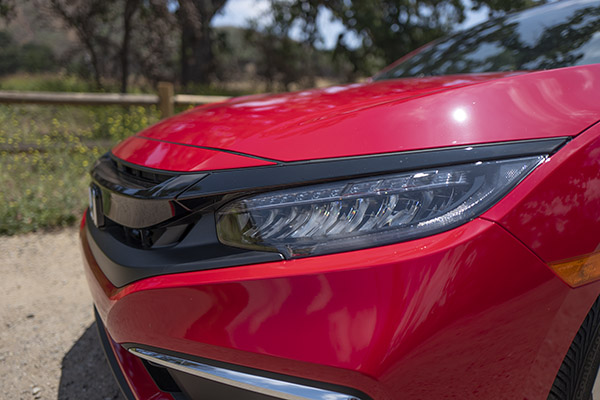 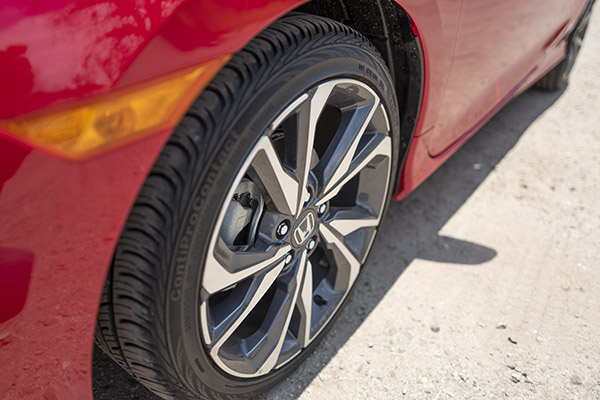 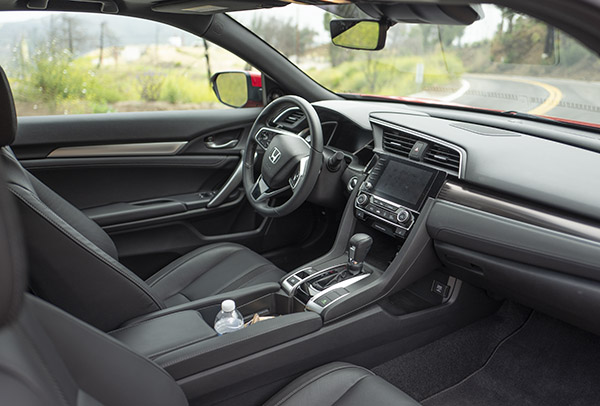 The long coupe doors feel really solid. They are almost old fashion these days since it is really rare to see a new 2 door car around.

The console has plenty of storage and plugs for everything.
The “premium Audio with 10 speakers” sounds fine. But not as good as I expected from “10 speakers”. 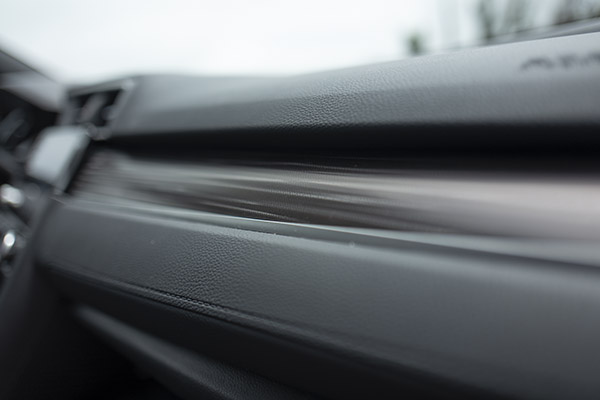 Things have not changed much inside. Which is fine. The trim on the dash is slightly different. And it still seems a bit confused. Not knowing what it is trying to be. Metal or wood.
At least it’s different…

The screen now has a volume knob.
Otherwise, everything looks and feels great inside the Civic.
I think it is still one of the most modern interiors in its class. 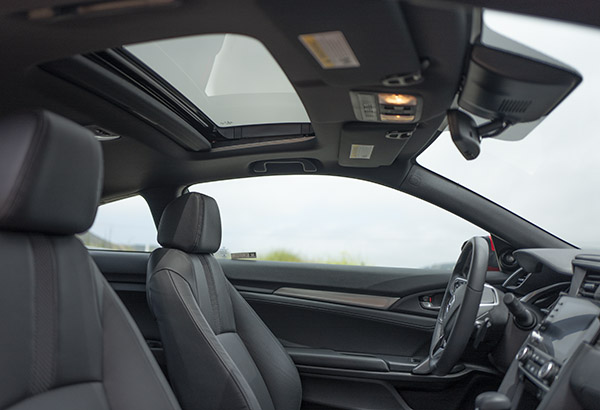 The seats are fine. But even on the Touring version, everything is manual. (At least on the coupe)
And there is no lumbar adjustment. Which would be a welcome addition.

The passenger seat doesn’t have a height adjustment either. So shorter people really feel like they are riding in a bathtub… 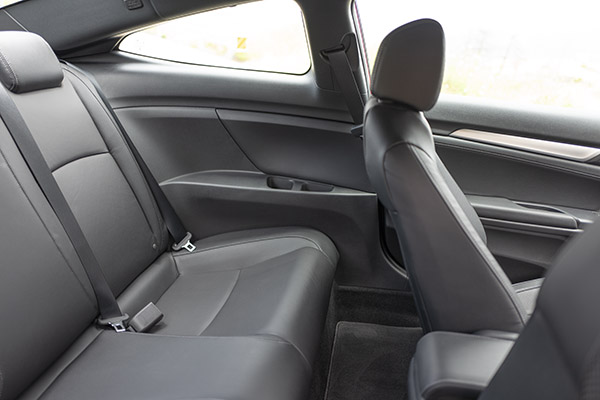 The back seat is surprisingly useable. More so than other larger coupes like the Camaro or Mustang. 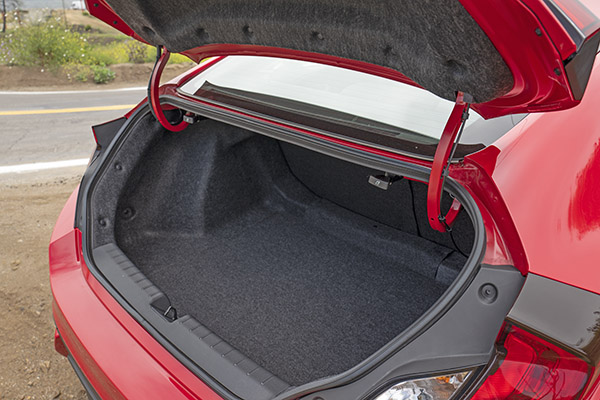 And so is the trunk.
The rear seats also fold down. There is a lot of space in the Civic coupe for all your stuff. 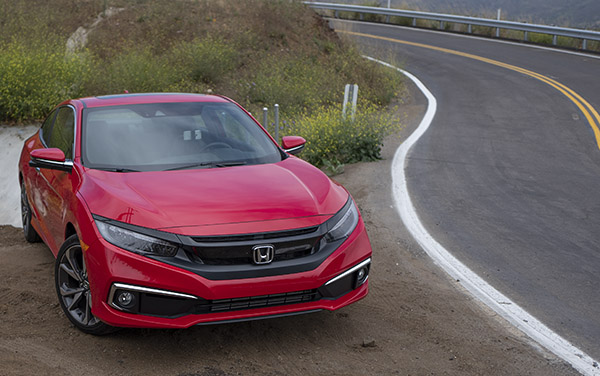 The 1.5 Liter turbo is very quiet when you start up the car in the morning.
With 174HP, there is always plenty of power. And the CVT mostly works fine.
If you don’t push it too much (like most CVTs)
Otherwise, things get a bit rough and noisy as you approach 3000RPM.
(Not sure if it is due to the engine or the transmission. )
Idle is silent, but not vibration free… With the AC off (When ON, the engine revs a tiny bit higher and the vibrations disappear) you do feel small vibrations through the seat. 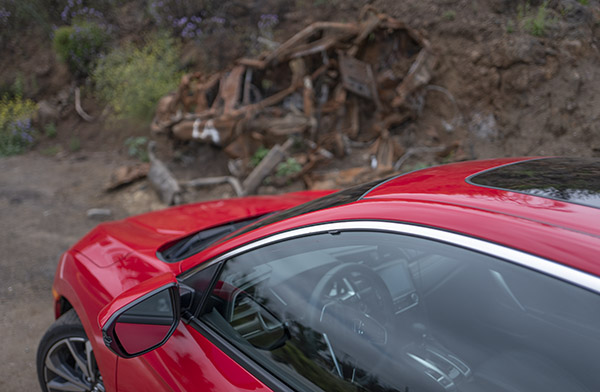 The steering has a very nice feel. It is not as soft as many. But I wouldn’t call it sporty.
The suspension is firm, and sometimes a bit too much so.
I understand the coupe is a sportier choice than the sedan version. Which is fine. (Plus it does have a shorter wheelbase anyway)
But the rest of the car isn’t that sporty anyway.
The car always feels very solid and planted on the road.
Road noise is about average. Which again, for a “sporty’ coupe is just fine. As this is not a luxury car.
At about $27 000, the Civic Coupe Touring is not that cheap.
But it doesn’t really have much competition and is on par with other loaded compacts around.
But for the price, it really should have a couple of things like a power driver seat and lumbar support.
A head-up display would also be nice.
The choice of interior colors is also very limited.
On the Touring, it is only black. Unless you pick a white car (then you can get a grey interior option)
I think the best version is actually the $23 500 EX model.
Which already comes with a sunroof, high-end stereo, turbo engine, etc…
The Civic Coupe Turbo is rated at 30/37MPG.
I averaged 28 to 30 around town. But was able to get well over 40 on the freeway.
I actually averaged 45MPG on longer trips. Which is quite amazing.
The current Civic is a huge success for Honda with over 325 000 of them sold last year.
The good looking coupe is a great way to stand out a bit, while still buying a very popular car.
And it is still roomy and very practical. 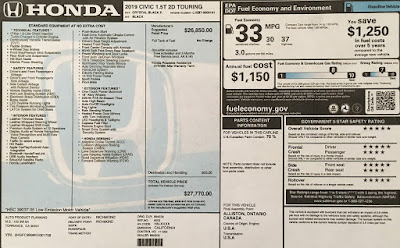 Here are all the pricing details of the Civic Coupe Touring I was driving.