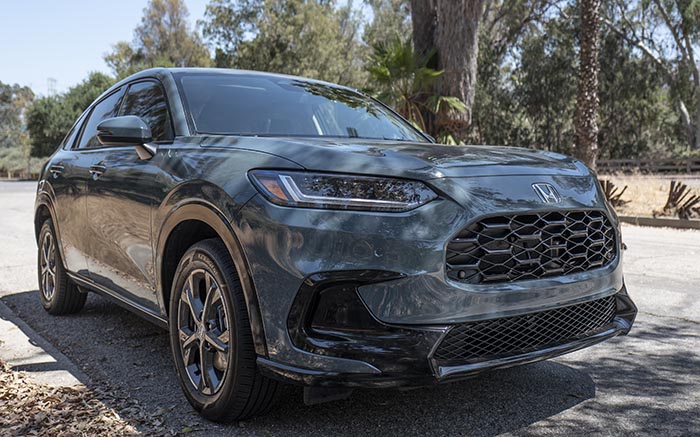 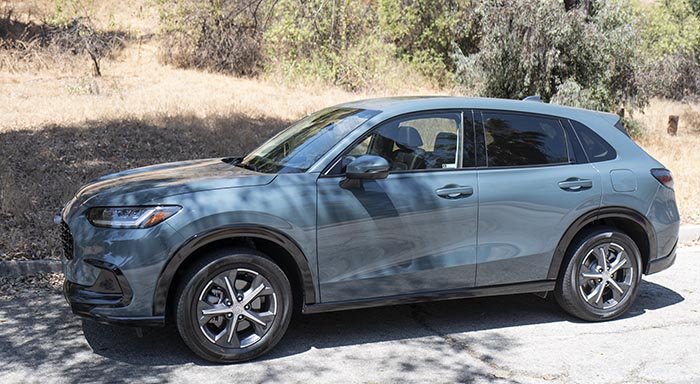 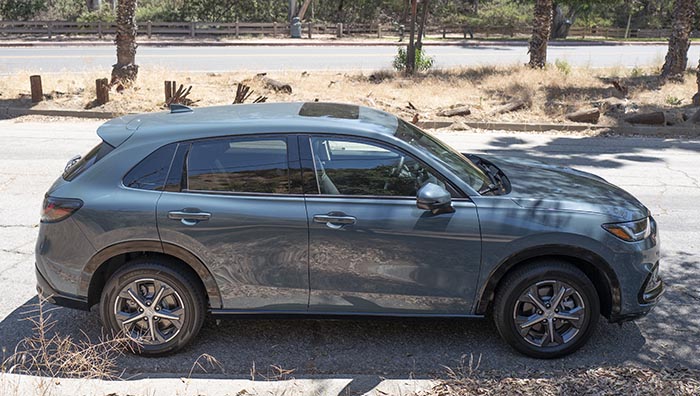 The new 2023 Honda HR-V is a totally different car from the model it replaces. Being based on the 2022 Civic instead of the much smaller Fit, it has become a larger, more mainstream compact crossover.
As well as a more generic looking one. From most angles, it could be a Ford or a Mazda. And there aren’t any common design cues with other current Honda models.
But the end result is fine. It also looks much nicer in real life. The model I was driving is the top of the line EX-L. Since a Touring version is no longer available.
And I have to say, the $395 Nordic Forest color on the car looks pretty fantastic. 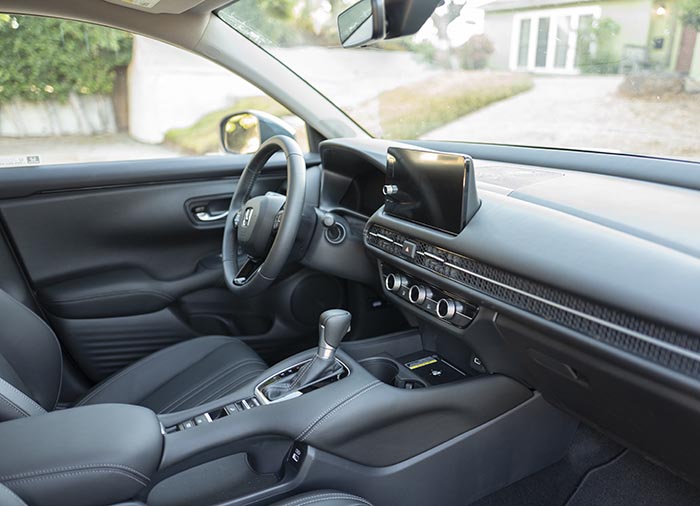 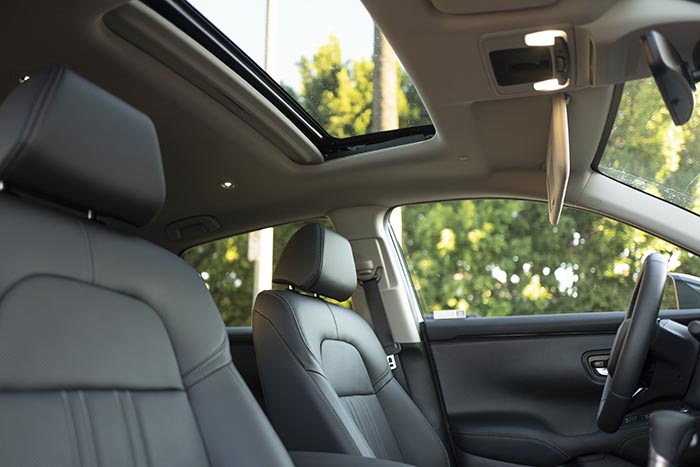 At first, the interior looks a lot like the Civic. That’s only because of the similar dashboard design. (Although the dash is actually different and less angular)
The rest of the interior is unique to the HR-V. And actually is much nicer and upscale than the Civic. The whole thing feels like a step above the sedan it’s based on.
The amount of soft plastic almost everywhere is actually pretty surprising. Everything feels very solid and generally much more expensive than it is. It also feels much nicer than the current CR-V.
My only problem was the tiny sunroof. (The Chinese market version offers a much larger panoramic roof)
The seats are very comfortable and supportive. The nicest surprise was the excellent sound from the 8-speaker system. Which was almost as good as the Bose in the Civic Touring. 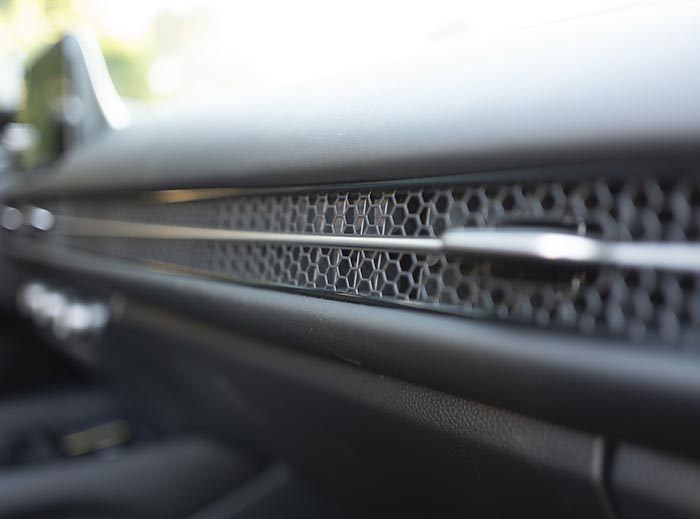 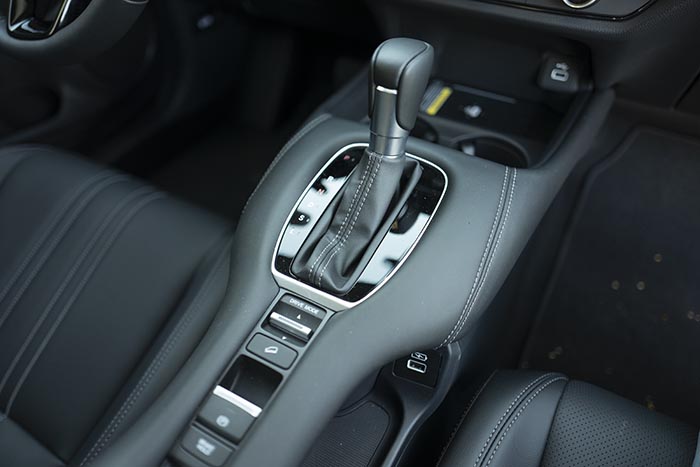 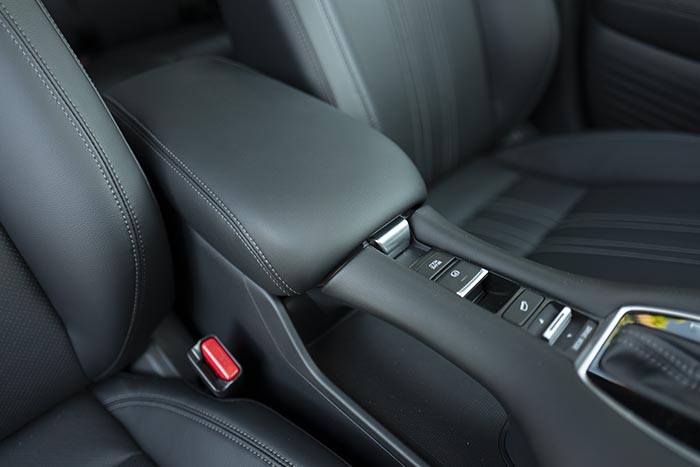 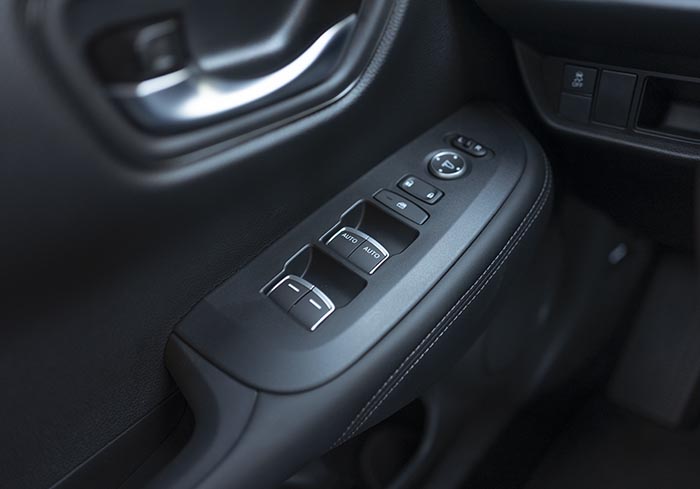 The real metal vents on the dash do look quite similar to the ones in the Civic. But they are actually a darker color.
The HR-V console is also much nicer than the Civic’s. With plenty of storage. All covered in un upscale padded material. Same thing about the door panels.
The whole car basically feels like a more expensive near-luxury model inside. 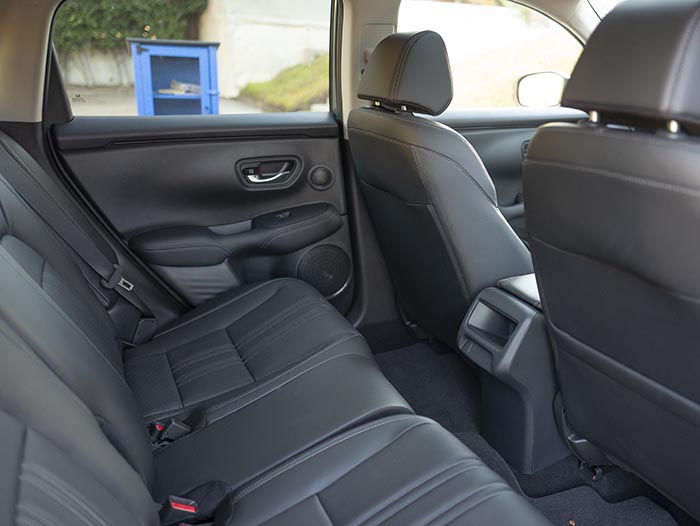 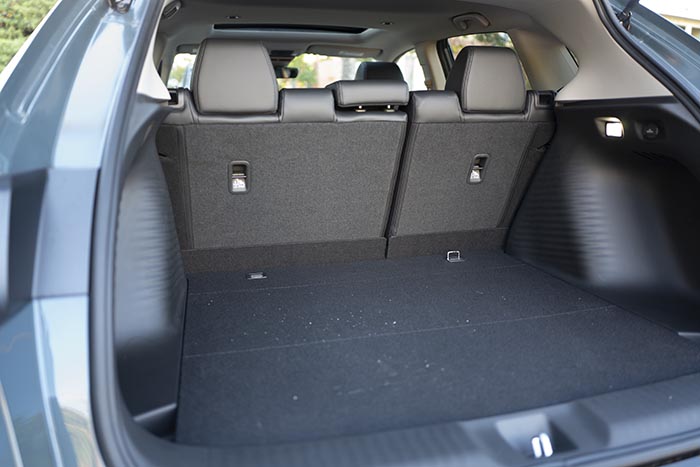 The back seat is roomy enough for adults. Much more so than some of its competition (like the Mazda CX30)
Although it does lack a center armrest And there are no vents or even USB plugs. Something other markets, like China, are getting.
The cargo area has plenty of room. And it’s actually long enough (with the front seats moved up just a bit) to sleep back there when the rear seats are folded. 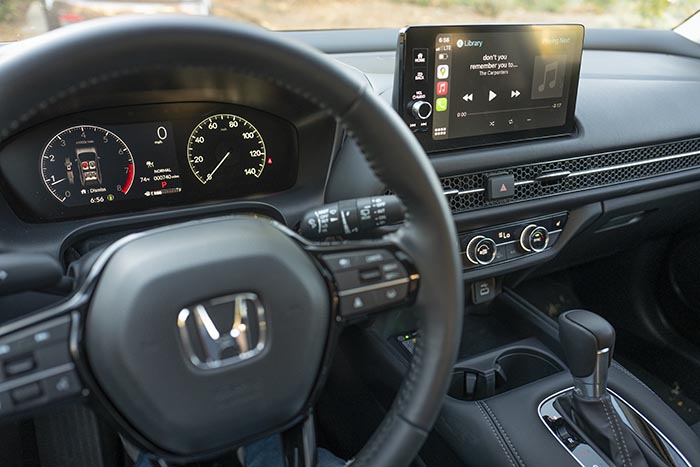 From the start, the HR-V feels as refined as it looks inside. The super-smooth 2.0 Liter engine is always quiet. The whole thing feels very solid on the road and the ride is very smooth and comfortable.
The flat hood makes the car feel a bit larger than it is. For most people, it’ll just feel more substantial.
The driving position is also quite low for a crossover (which I prefer). This feels more like a high car than an SUV. And visibility is excellent all around.
The steering is superb. Adding a lot to the driving pleasure and the refined feel.
I was really wondering about the CVT since I really don’t like it in the Civic. But it behaves very differently in the new HR-V. There is none of the droning you hear and feel in the CR-V and Civic. It’s just always quiet and smooth.
The Sport mode on the console works great. But I couldn’t really feel much difference between the Eco and Normal modes.
Sure, the CVT is still not as responsive as a regular automatic. But it is actually a great match to the luxurious and refined feel of the new HR-V. This is just not a car you feel like driving really fast anyway.
It’s a pleasure around town and great on the freeway.
(Although road noise at freeway speed can be a little higher than I’d like)
There’s enough power for 99% of people who will actually purchase this. Sure, with 4 people on board on a long hill, things might not be that much fun. But this is a super roomy crossover with a 2.0 Liter engine with 158HP. This is not intended to be a sporty ride. And isn’t trying to be. And again, the Sport mode is actually a good help in some situations. 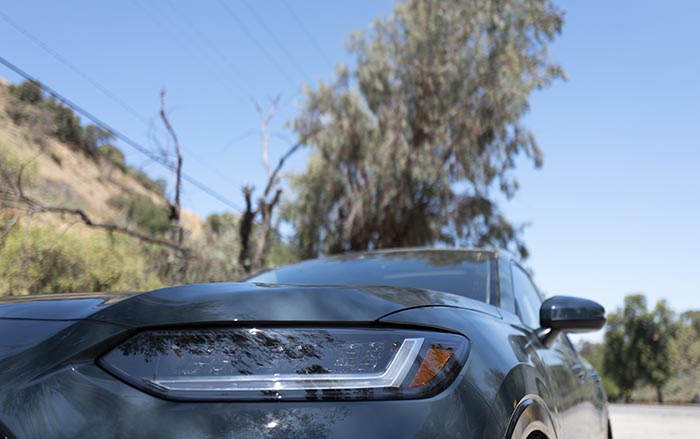 The 2023 HR-V AWD is rated at 25 City/30Hwy MPG.
I was able to get a bit better around town with the AC off. (Around 28MPG) But turning it on lowered it well under 25MPG.
On the freeway, it was very easy to average almost 40MPG.
After a few days of mixed driving (including around 30% FWY) I averaged 25MPG.
I just had 2 small issues with the HR-V during my week drive. Twice, it took a couple of tries to start the car. Not sure why. I kept pushing the start button with my foot on the brake pedal and nothing happened.
And the turn signal had trouble turning itself off after turning. 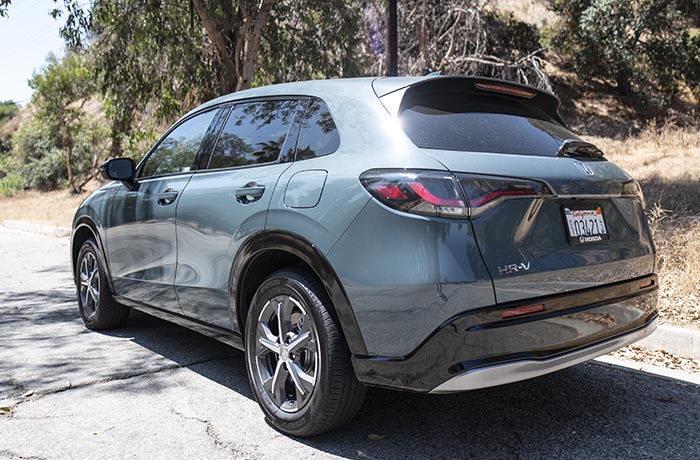 The EX-L AWD version I drove is the most expensive HR-V available today at $30 590 including destination. The 2023 EX-L is so well equipped, I just cannot see what they could add to justify a more expensive Touring model (Except maybe the panoramic roof and rear AC vents and USB plugs.)

I test drove the previous generation back in 2019. That loaded model (Touring) was priced at $29 585 back then. Not only it was a smaller car, but it had a worse sound system and just wasn’t as good as the new one. By far. (And you can even save almost $2000 by getting the FWD version)

At that price, the new 2023 HR-V is probably the best choice in its segment. It is very refined, quiet, and smooth. With a very upscale interior. (I do wish the light grey interior was more widely available…)

At $28 700, the loaded FWD version is a great deal on a great car. It really has everything you’d want, and more, at that price point.

While I love the 2022 Civic, I think the HR-V is better. Especially with the CVT. The 6-speed Civic is great. But I’m afraid very few will actually buy one.  Surprisingly, the Civic EX-L hatchback is around the same price as the FWD 2023 HR-V EX-L. While I do love the Civic hatch, I really think the new HR-V is a better car. It has a much better CVT and interior. It is roomier, quieter, and more comfortable. it just feels more expensive in general.

Which could be bad news for the Civic Hatch. 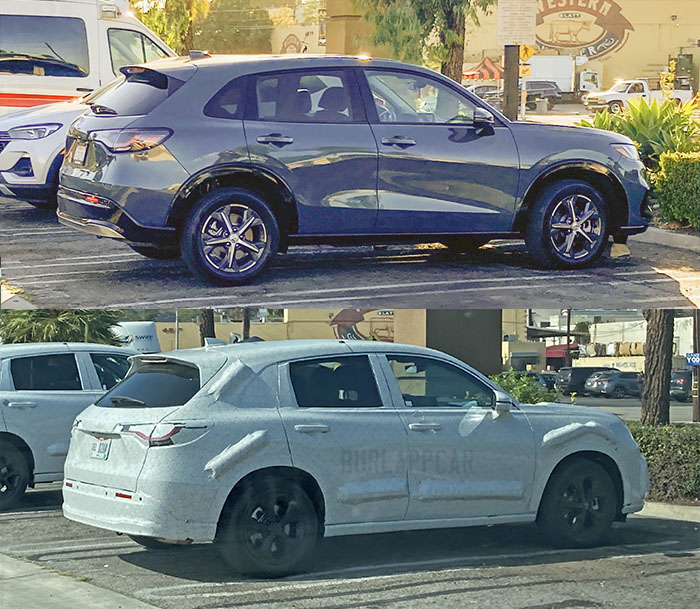 It was also a lot of fun parking the 2023 HR-V where Honda had parked a few prototypes just a few months ago. At the time, it was actually hard to guess what these were…