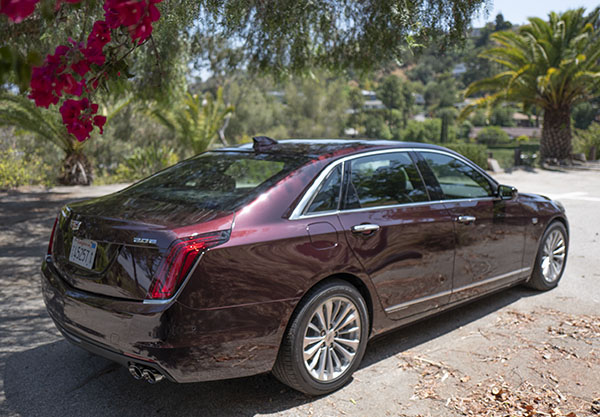 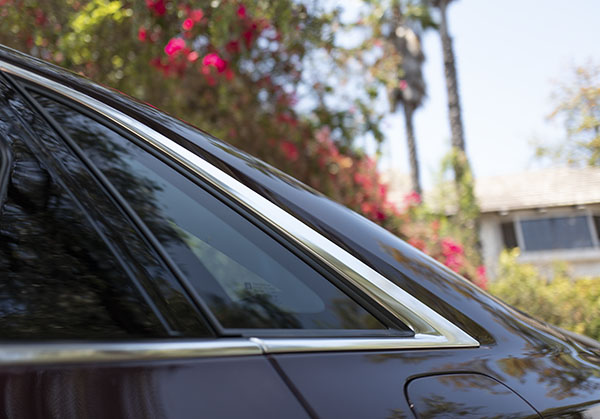 The Cadillac CT6 is a very nice looking car in real life. Much nicer than what I though from early pictures back when it came out.
It is a large, imposing car. It has a great low and wide stance.
And looks more athletic than other large sedans from the competition.

The rear end is thew only thing “not quite right”. The tail light design makes the whole thing a bit droopy looking.
(Glad to say this has been completely corrected on the 2019 model.) 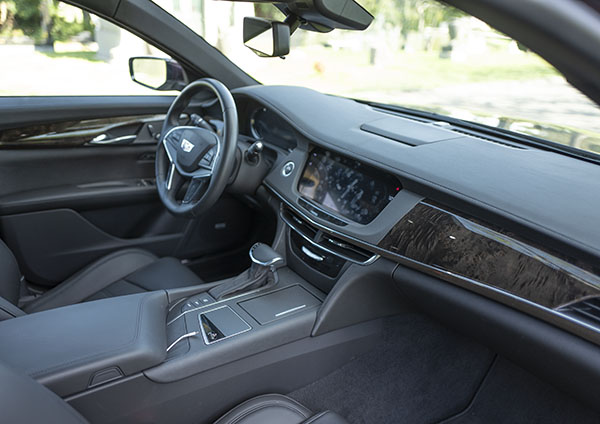 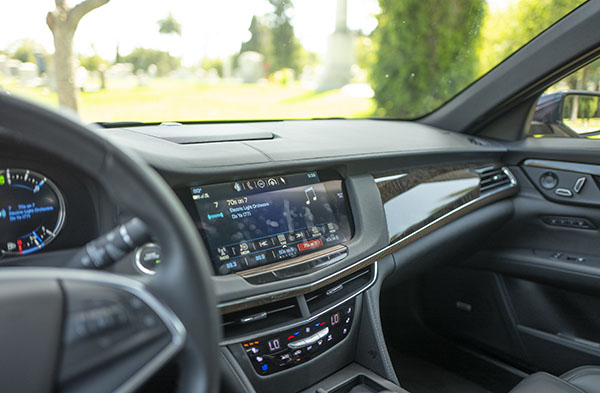 Same thing inside. While looking a bit plain in pictures, the whole interior looks really nice in the flesh.
And everything has a super solid high end feel.

I do like the simplicity of the design. Especially when compared to the glitzy/overdone interiors from the German competition these days. 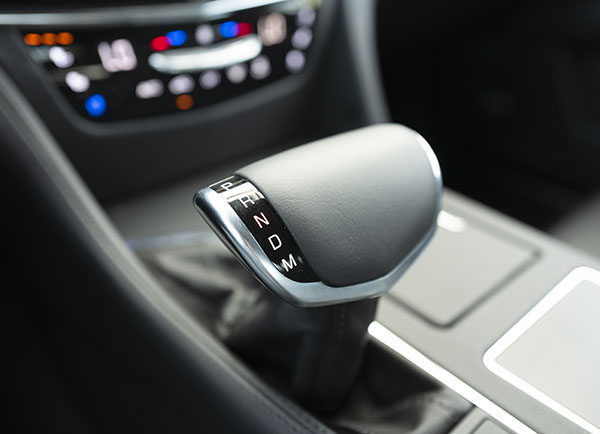 I have to give a special mention to the shifter. A great design. Easy to use. And it feels great.
Unfortunately, it is being replaced by a more confusing all electronic unit for 2019… 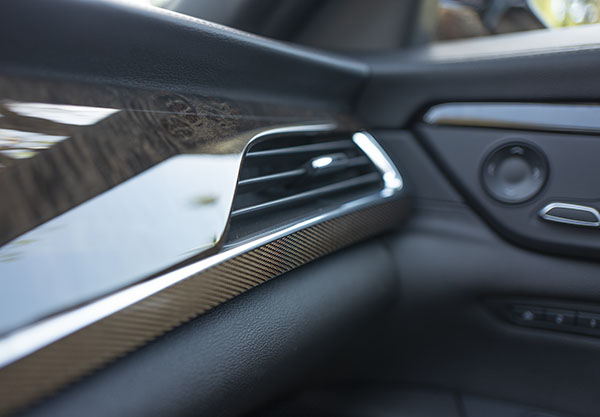 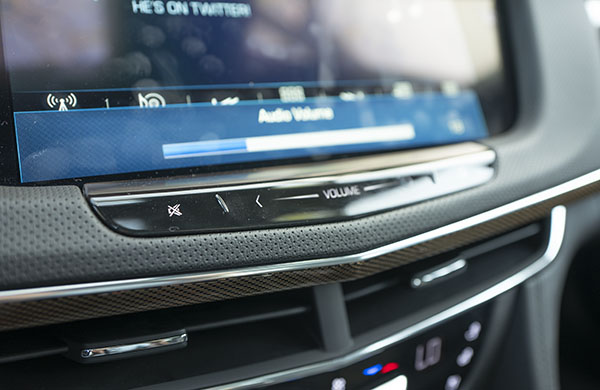 Somehow, most car makers are currently at war with knobs. So here we have some kind of an in-between solution. No + and -, but a digital slider. Which actually works quite well.
(But still not as well as a simple knob.)

Otherwise everything feels great and solid. 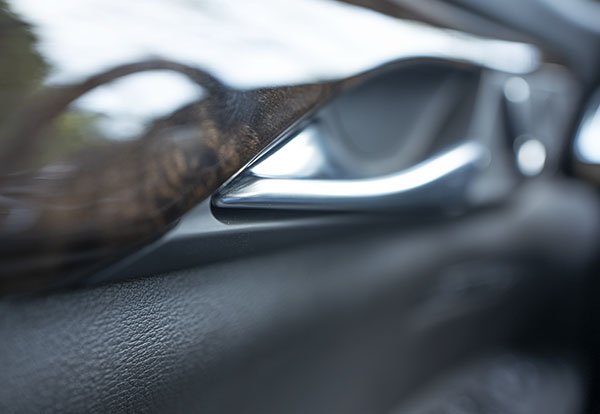 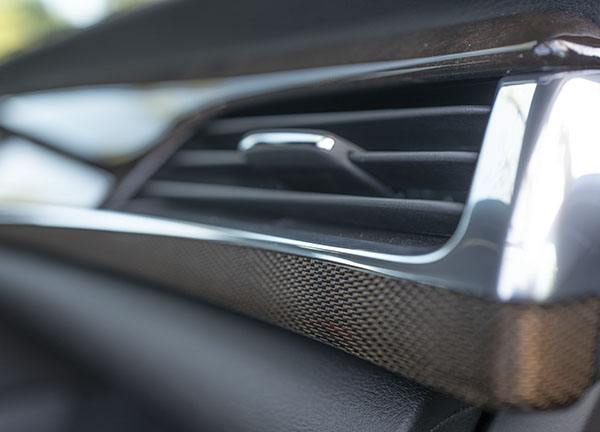 The few bits of metal trims actually look and feel like metal.
Unlike the stuff in Mercedes, BMW and Audi models where it still looks like painted plastic for the most part. 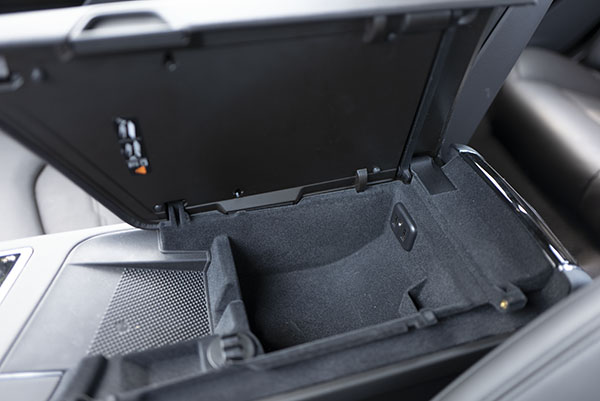 There is just not enough storage in the cabin.
This is all you get from under the armrest. There is nothing underneath.
Not much more than a phone fits there.

(It was actually tough to find a place to hide my camera. The glove compartment being too small for a larger lens) 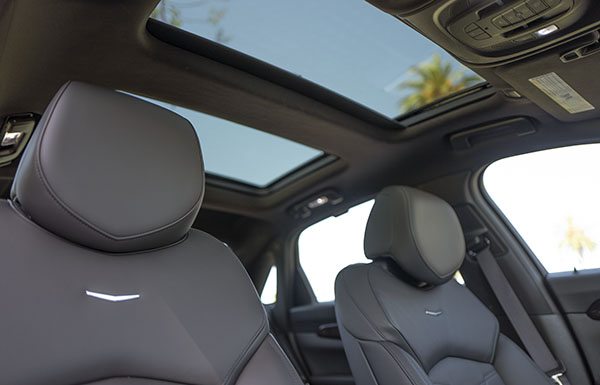 The seats are very comfortable. The double sunroof is great.
With electric shades for both.

And I really appreciate the forward adjustment on the headrests. 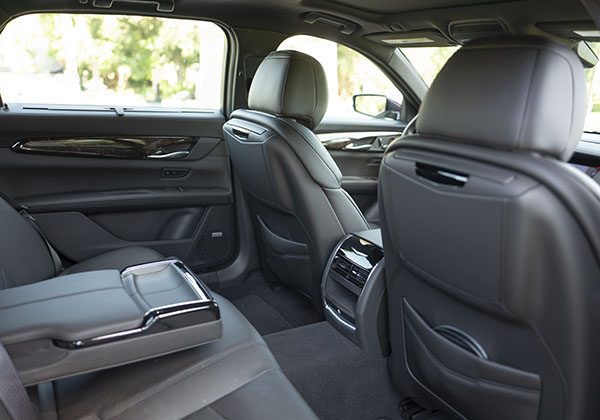 As you’d expect. The rear seat is more than roomy, it is huge.
Much. much roomier than the similarly priced competition . 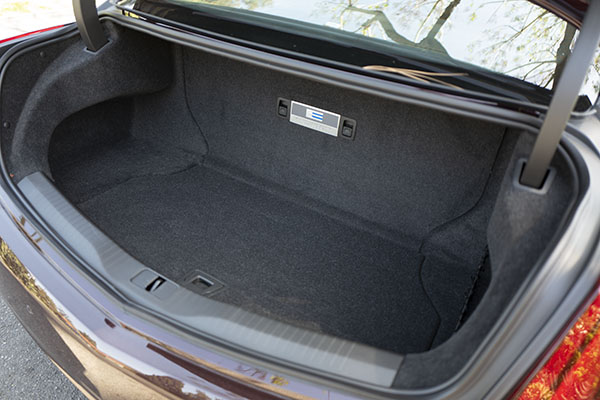 On the Plug-in model, the large trunk is quite compromised.
The batteries can only fit in the trunk. Since it seems the car wasn’t designed with electrification in mind… 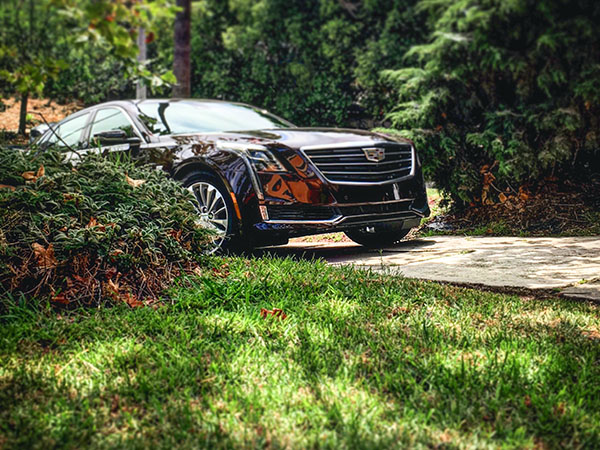 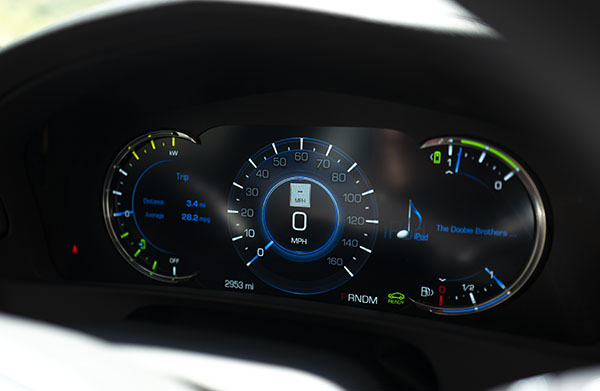 The electronic instruments can be configured in a variety of ways. 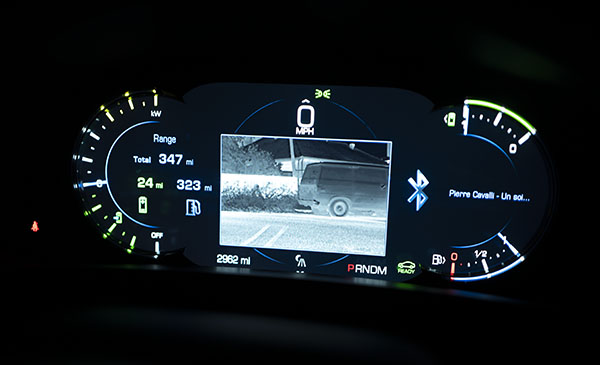 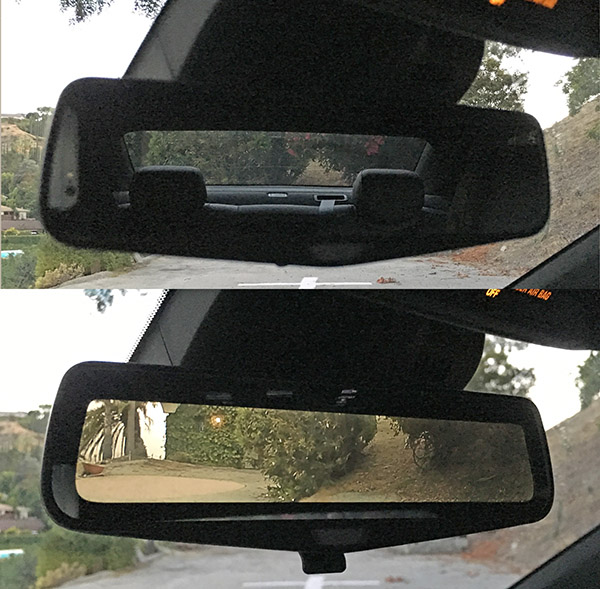 The rear view mirror has the option of using a rear camera. Which is really great.
Since there is no obstruction.

Although it does take a little while to get used to…. 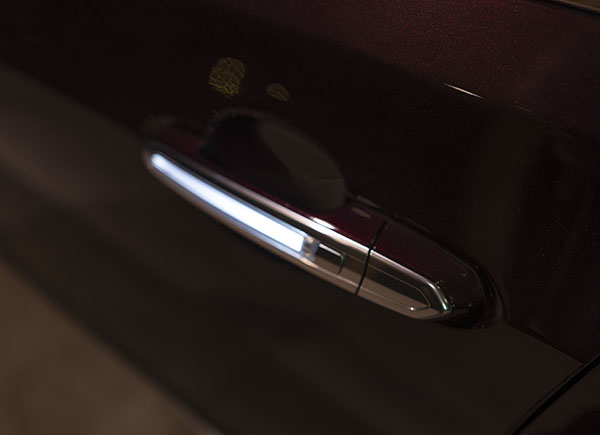 The fancy car recognize you when you approach it. Lights turn on, as well as the door handle. 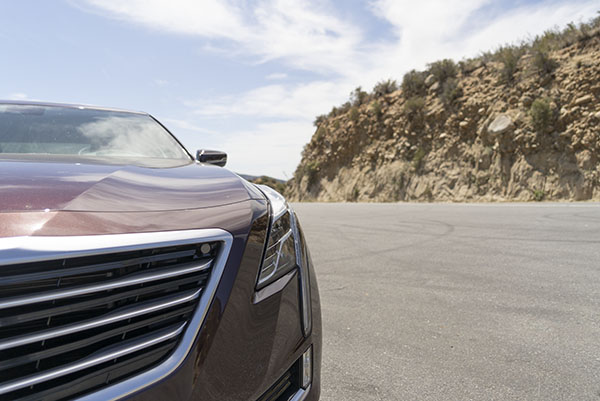 The CT6 is a great driving car.
It feels low and wide. The suspension has a very European feel to it.
Always super comfortable and smooth, yet never floaty. The whole car feels like a refined tank.

Same thing goes for the steering, which has a very nice weight to it. And is very precise.
It is just a pleasure to drive.
In “SPORT” mode, the steering firms up even more. Which is not necessary and does feel a bit artificial at times. 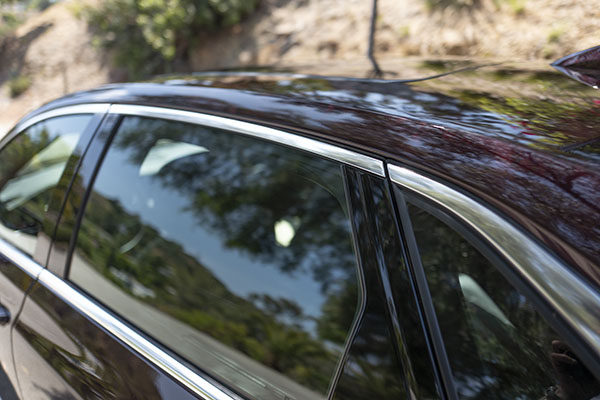 It is mostly hard to tell when the car uses the batteries or not in the regular hybrid mode.
Since things are so quiet.

But the transmission (A weird take on the CVT) does act in strange ways sometimes.
It just revs up the engine pretty high then stops. And it doesn’t match your right foot.
It just revs up on its own whenever is needed. Usually a couple of seconds after you accelerate, and just before you stop . Which feels and sounds pretty strange at first.

This doesn’t happen when cruising. So FWY drives are almost silent all the time. 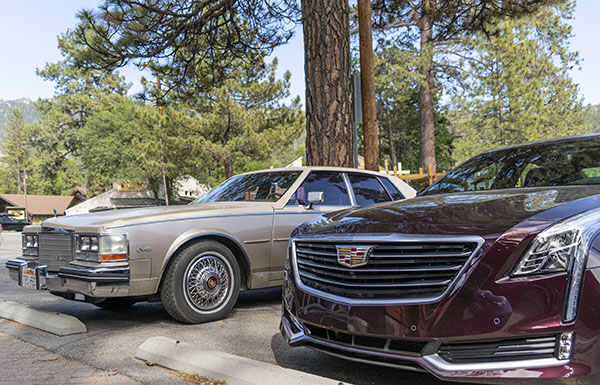 When plugged-in overnight, the available range never showed more than 28 miles available (It is rated at 31)
But once under way, I did get 32 miles of pure EV drive a couple of times.
That EV drive is of course great. Quiet and fast.

But the regular hybrid mode isn’t as smooths you’d like in a luxury car.
(mainly because of that strange transmission behavior. )

The official MPG rating for the CT6 plug-in is just 25 average.
I had no problem getting 41MPG on the freeway with an empty battery.
also when the battery was empty. Gas mileage around town varied a lot, between 27 and 35MPG.
But no matter what, you get much more than that official “25MPG Average”.

Which is actually great for such a big car. 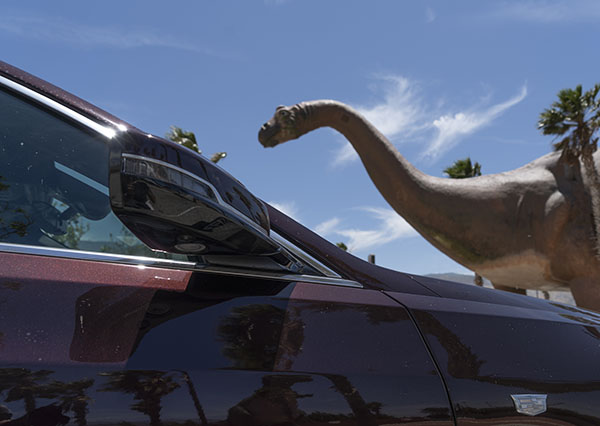 CarDirect doesn’t list the plug-in Hybrid, so it is hard to check actual prices. But on the Cadillac site, it lists a $2000 rebate. Or a lease that is $100 more a month than the 3.6 Liter AWD version.

So no matter what, it is still at least $10 000 for the Hybrid.
Which I think is a lot. Too much really.
(It should have a much longer EV range to really be worth it.)

While the CT6 is truly a wonderful car, I think the Hybrid powertrain isn’t as refined as it should be.
And the gas mileage difference with the 2.0 Liter is just not enough to justify the extra spending.
(The 2.0 Liter is rated at 22 City/30Hwy)

I was very impressed with the Cadillac CT6.
A very nice looking car with an athletic presence.
It drives great and moves people around in great comfort. It is exactly what a luxury car should be.

The Hybrid model is just too expensive compared to other versions.

(I will try to schedule a non-Hybrid model soon) 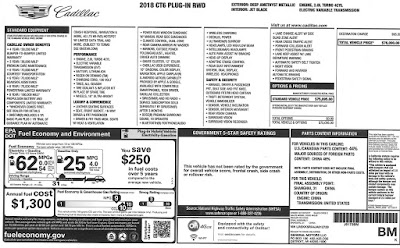 Here is the full pricing of the model I was driving for the week.