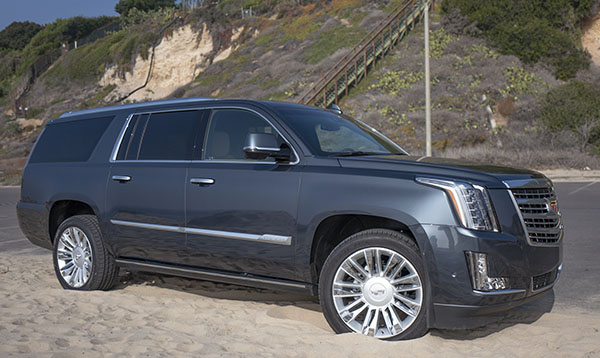 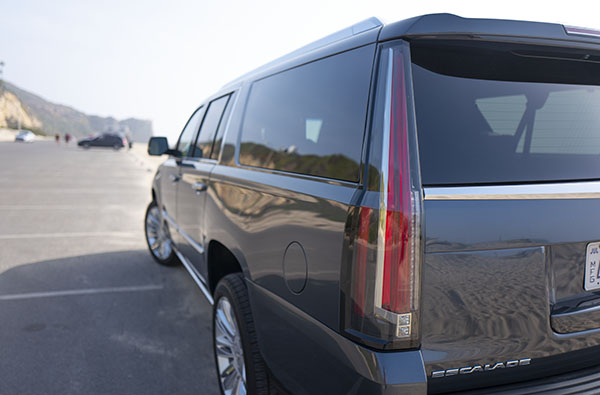 There is no hiding the massive size of the Cadillac Escalade.
And I guess it is actually part of its appeal for many.

But the now familiar design is actually very nice and subtle. Especially compared to the previous version.
Sure there is a still a huge grille, but it is finished in a satin look, instead of chrome.
And the whole thing, at least to me, looks much simpler and classier than its GMC Yukon cousin. 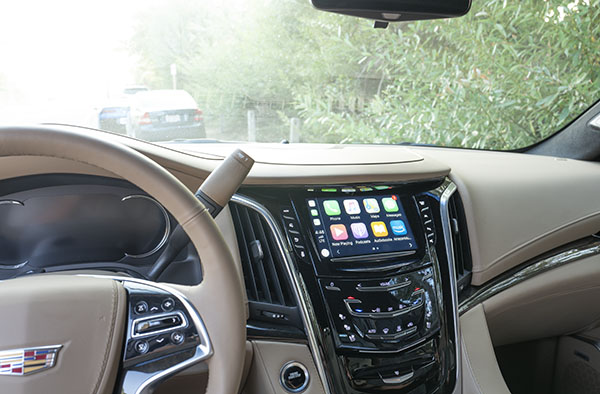 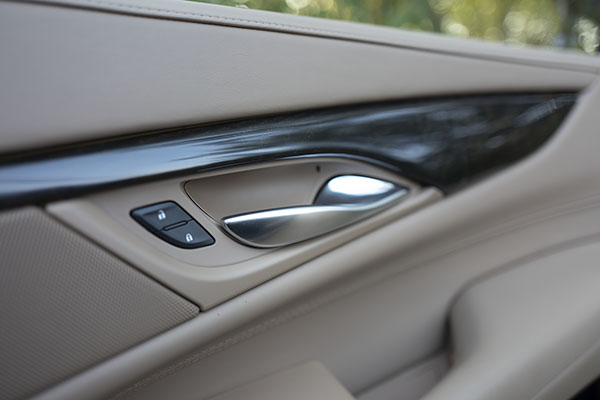 Even though this is basically the same car as the Chevrolet Suburban and Yukon XL, at least GM gave the Cadillac a redesigned interior.
Which looks a lot like the CTS and XTS. Which also means it is of a previous generation Cadillac interior design.

Everything inside feels expensive and solid. And looks much nicer than the Yukon and Suburban. But I would say it still lags behind a similarly price Range Rover. Which does feel very special. 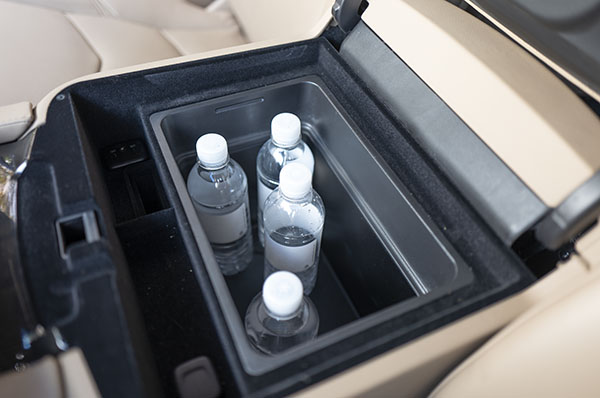 The Platinium version I had came with a center console cooler. Although it sounds like a good idea, it takes the whole console space. (At least you can turn it off if you need to put other stuff in there, like a camera)
And it doesn’t actually cool that much. And of course, it only works when the car is on. 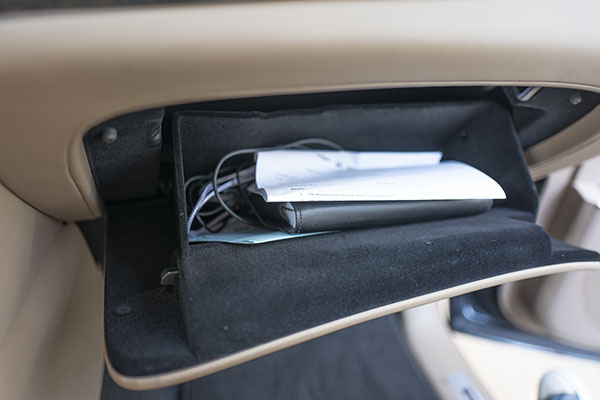 The glove compartment is ridiculously tiny for such a huge vehicule. 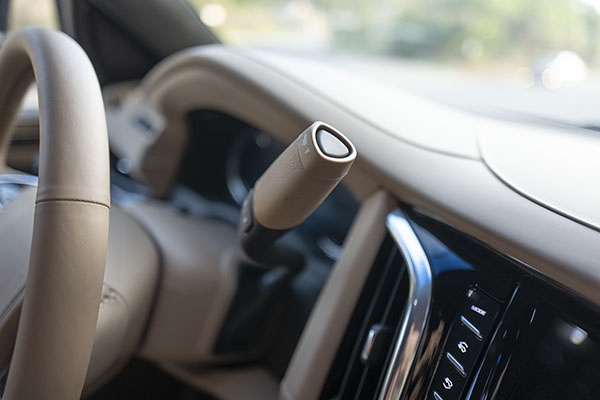 Of course, it carries over the column shifter from the much cheaper GM full size pick up trucks. Which, also antiquated, works just fine.
But it really takes away the from “high end luxury” feel the Escalade is trying so hard to convey.
(The next generation model will have a console mounted shifter) 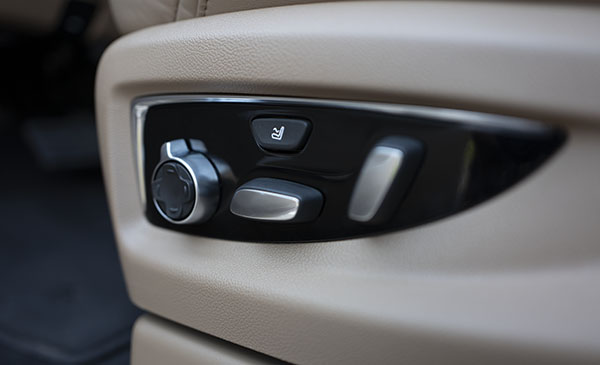 The Platinum version comes with a massage system for the front seats.
It works quite well once you master the settings. But I also think it is quite distracting for the driver.
(Freeway speed butt massage can be quite a puzling experience…) 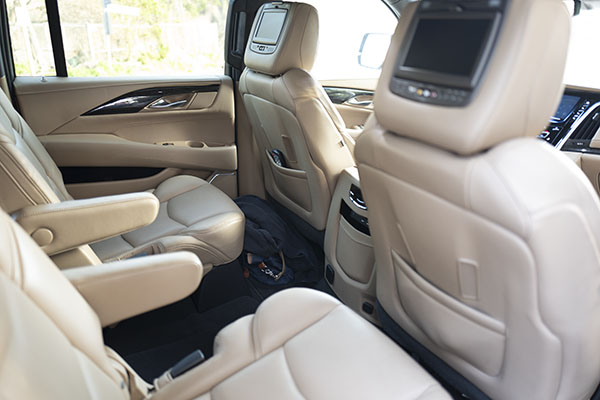 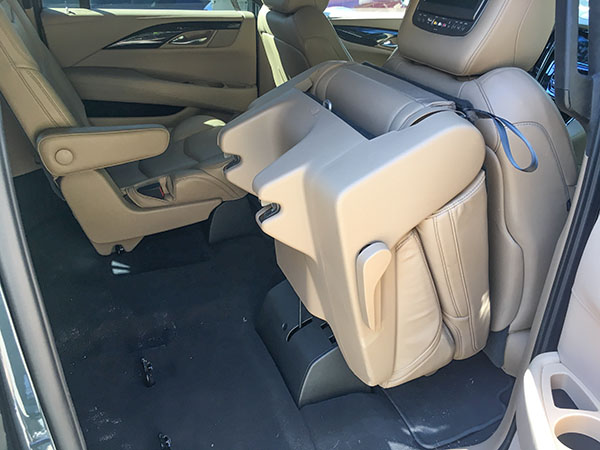 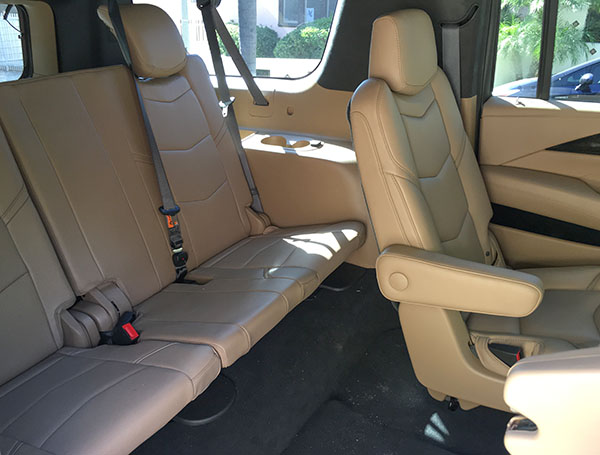 All the seats are very roomy of course. Altough the rear seats are all fixed. Thet cannot be moved forward or backward.
Access to the 3rd row is pretty easy. 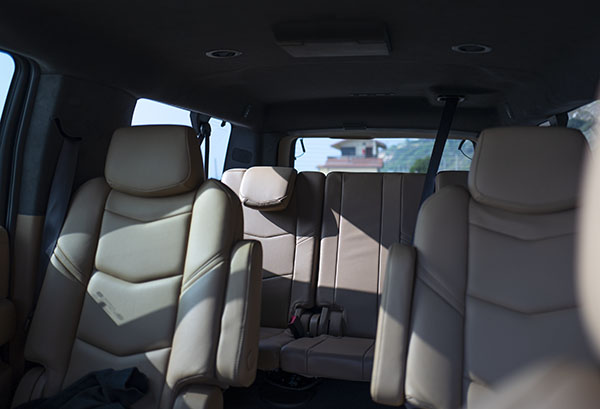 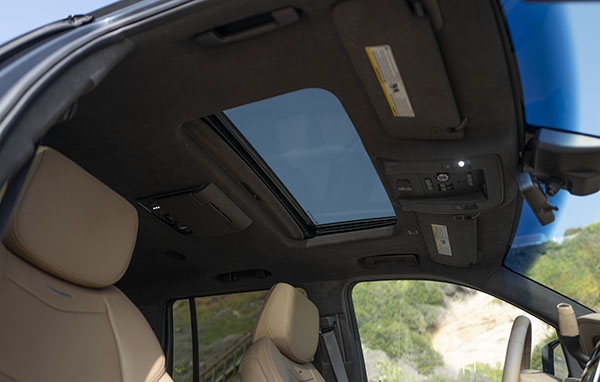 Because of the “entertainment system,” this particular version only comes with a regular sunroof.
Another old fashion detail. 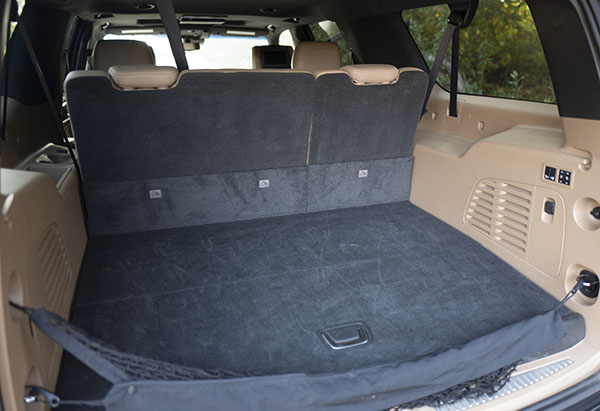 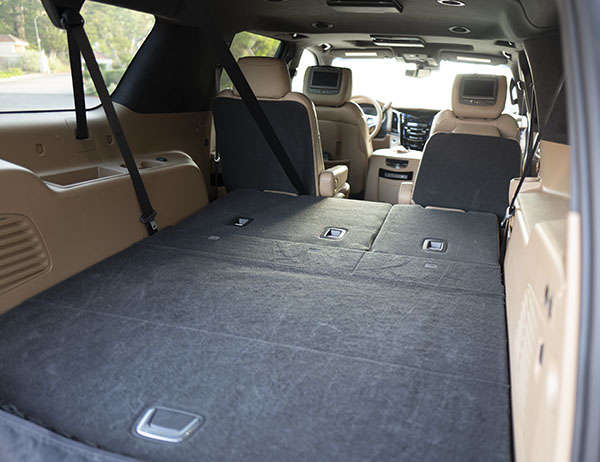 And of course, there is a huge amount of trunk space. Notice how much there is left even with the 2nd row still up. 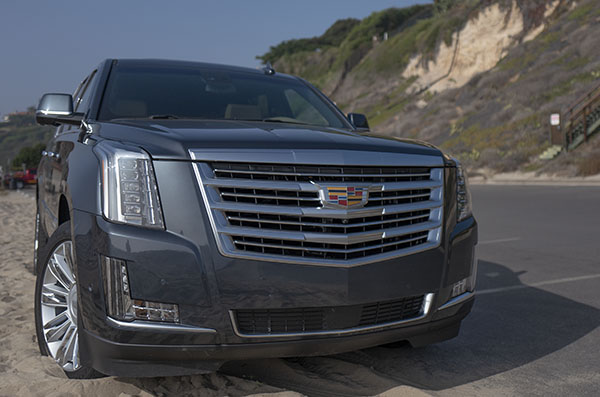 Basically, the Escalade drives exactly the same as its Chevrolet and GMC Cousins.

I couldn’t really tell a difference from the new”magnetic ride control”.
And I am not sure it is activated in both the default “Tour” and  “Sport” modes.

In “Tour”, it just drives like a fancy truck. Sure it is quiet and seems to be comfortable at first.
But you quickly realize it is always moving around. With constant left and right motions. And doesn’t really absorb bumps well at all. Again, just like most trucks. It is actually not really a comfortable ride.

But “Sport” actually changes things quite a bit. The steering is much nicer and not as vague.
And the whole thing doesn’t move and jiggle as much.

After trying the “Sport” mode, I pretty much left it on all week. 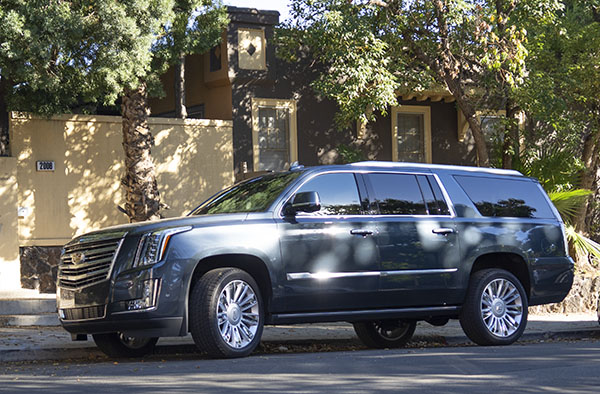 I tried the self-parking featured, and it works great.
It actually figures out if you are driving by a parking space long enough for the beast. Then alerts you.
And at a push of a button, takes over. But only the steering part. You still have to control accelerator and brakes.
It is actually a great feature for this kind of car.

The huge 6.2 Liter actually shakes the whole car for a second every time you start it in the morning.
I am sure “big truck” people and Harley riders might enjoy it. Not sure people expecting a high-end luxury ride from their $100 000 do…
The Escalade ESV AWD is rated at 14/21MPG.
I averaged exactly 14 around town (While trying hard) But got around 23/24 on the freeway.
Which is actually not so bad for such a huge machine ( I remember getting 23 HWY years ago with a much smaller Infiniti FX35) 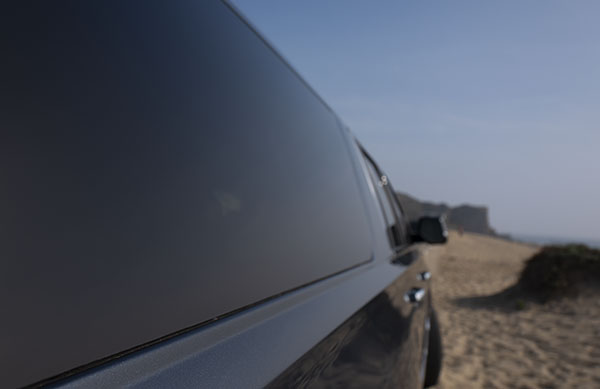 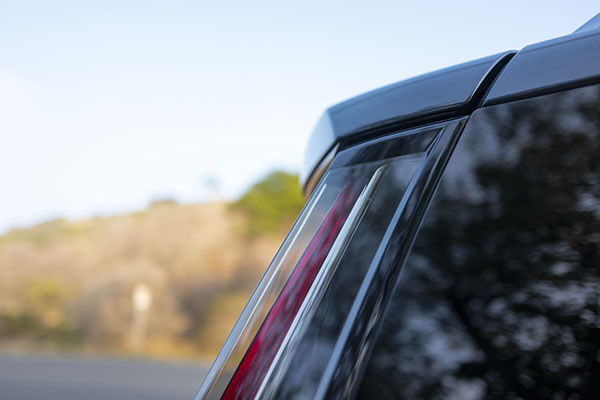 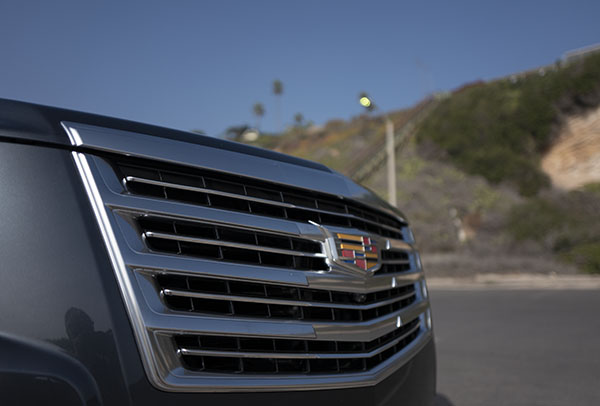 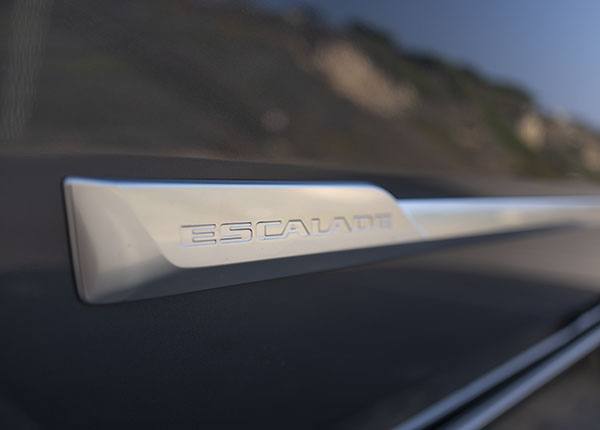 The Cadillac Escalade doesn’t really replace a true luxury sedan.
Even though it seems to be doing so for many people.

It is quite a high step up to get inside.
Which is actually pretty hard for older people.
It is never as quiet or comfortable as a similarly priced luxury car. (or most cars)
And it uses way more gas.

Just like the Suburban or Yukon, it only makes sense if you really need that much cargo space. Or towing something huge.
(Which I am sure, only about 1% of owners do)

I think the LWB Range Rover is its toughest competition. Since it is really a luxury machine, not based on a much cheaper pick-up truck.
(But I am also pretty sure the Cadillac is much more reliable.)

At over $101 000, my test model was crazy expensive.
A totally loaded Suburban, with more than 90% of what you get in the Escalade is over $25 000 less.
I am not sure the different interior design and Cadillac name are worth that much extra.
But I guess it does to a lot of people since Cadillac has sold 35 000 of the last year.

A brand new Cadillac XT7 (Another stupid name)  SUV is due out very soon. Based on a platform similar to the Buick Enclave.
The Enclave is a wonderful SUV. Quiet, comfortable and super well finished.
If the Cadillac version turns out even better, the XT7 should be on the top of the luxury SUV food chain.
And will appeal to a much wider audience than the Escalade. While providing about 80% of its utility for most people. And, at a much lower price.

For Escalade fans, there is an all-new one coming next year too.

The Cadillac Escalade is extravagant. But anything at this price is anyway.