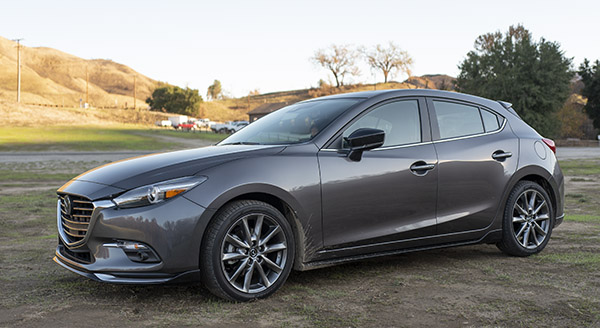 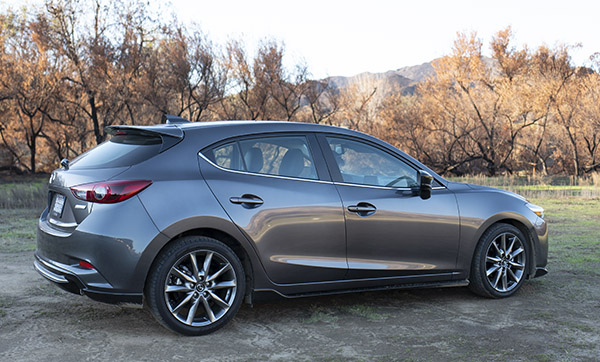 The current mazda3 hatchback is still, after over 5 years, a very nice looking car.
A simpler, and more grown-up visual experience than something like the Civic hatchback.

And even though I am, in general, not a fan of grey on a car, this new “machine grey metallic” (A $300 option) does look great. And pretty special. 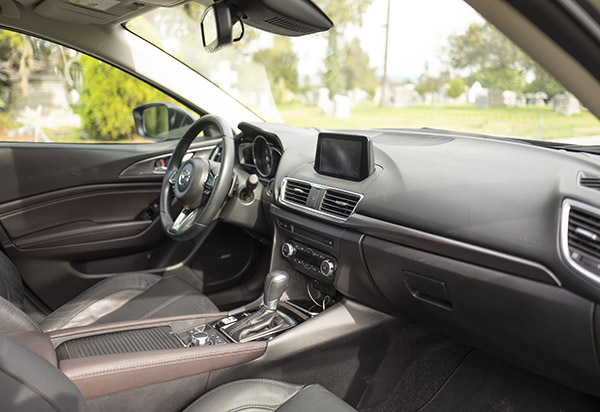 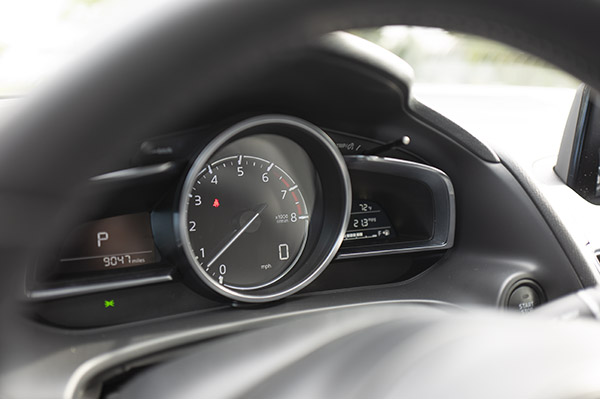 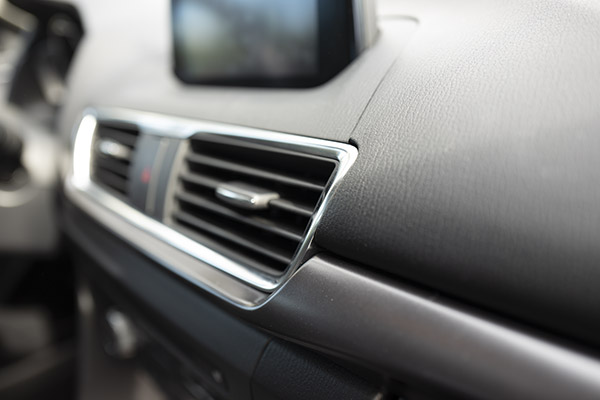 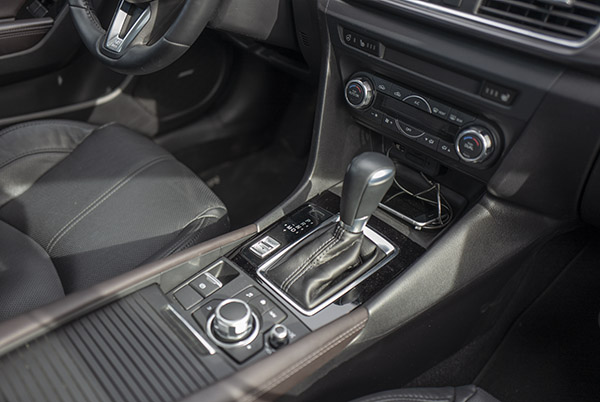 Same thing inside, where everything still looks good and pretty upscale (At least on my loaded Grand Touring model)
The seats have excellent support. And while they are very comfortable, I noticed the headrests are actually pretty hard.

The Bose stereo sounds very good. But Mazda’s own infotainment system (My test car didn’t have the newly available CarPlay installed yet) is still pretty confusing at first.
Although, you do get used to it. And the scrolling wheel control on the console works fine. After you tell your brain to get rid of the idea of a touchscreen…

Everything works and feels fine. Although the doors don’t have that super solid feel you get from a VW or a Honda these days. 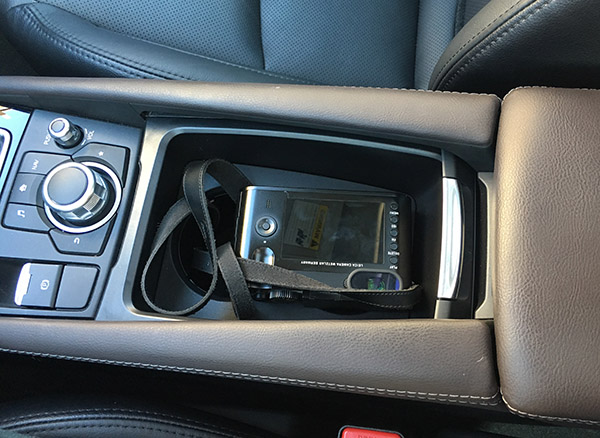 The console has plenty of storage. And both are hidden compartments. 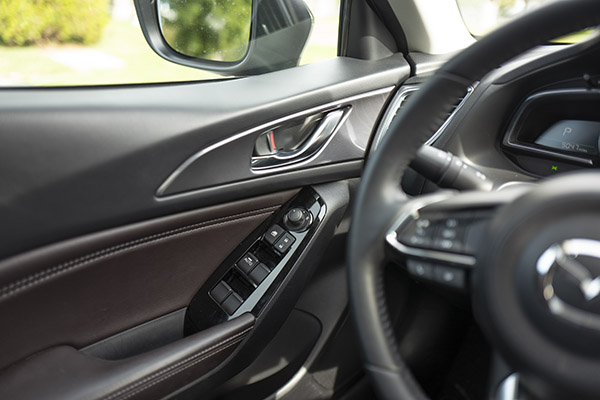 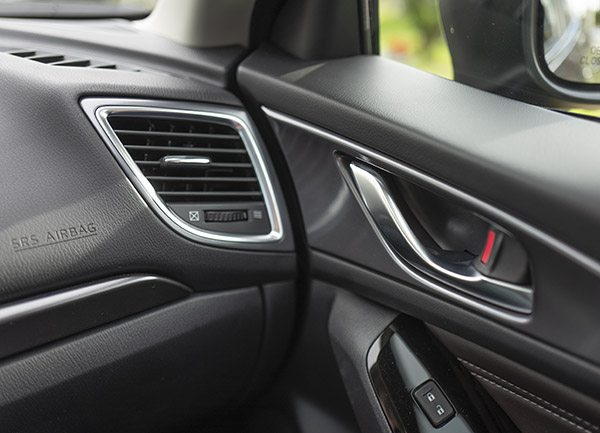 The materials used inside the car are all of high quality. I especially liked the dark metal finish Mazda uses. It looks very classy and upscale. 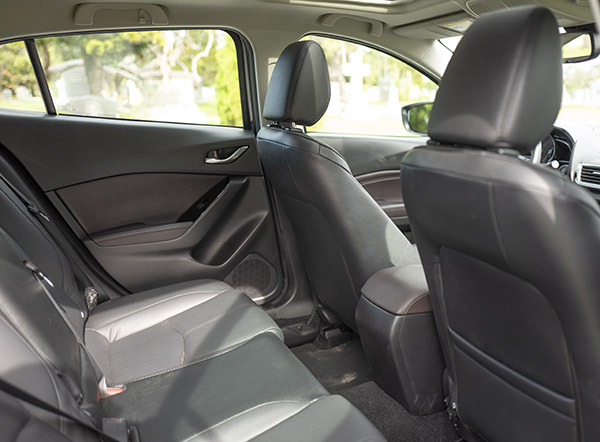 The rear seat is fine. 2 adults fit back there without a problem.
But it is not even close to the giant rear seat of the Jetta. 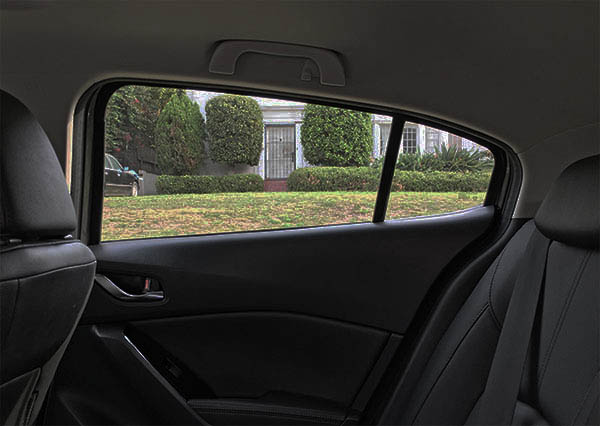 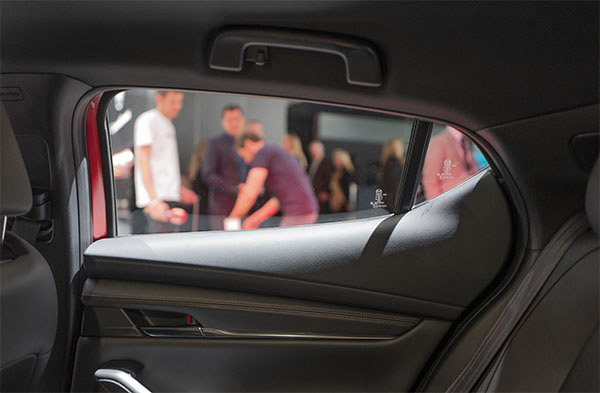 I got plenty of negative comments when I posted a picture of the side view from the back seat of the all-new 2019 Mazda3. (Above)
So I took the same picture with the 2018 Mazda3 I was testing. (top picture)
Of course, it is a bit better than in the new one. But still not that great.
There is actually less of a difference than I thought… 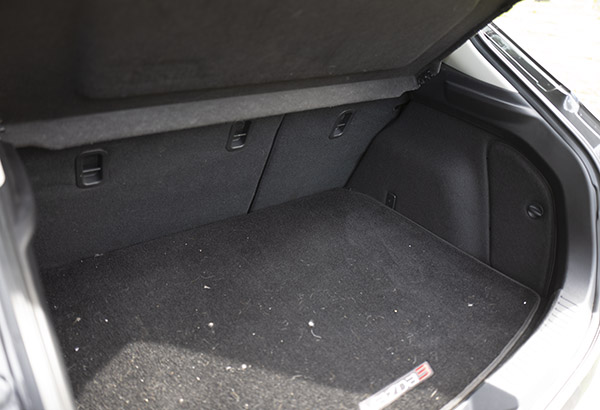 The trunk is also fine and roomy 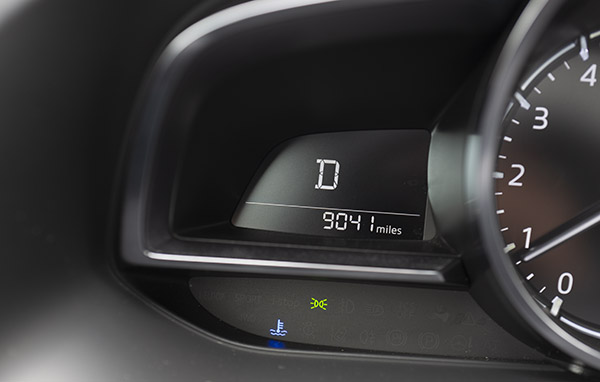 The first thing I noticed when starting up the car in the morning was how loud the engine was.
It also took a while for that indicator (telling me the engine is cold) to turn off.
Which is something you really don’t see anymore. 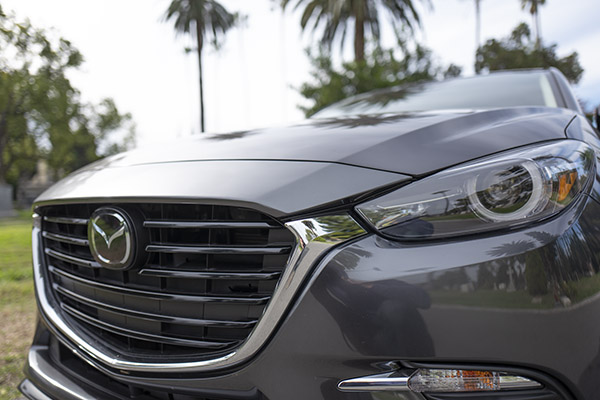 Once warmed up, the engine settles to a much quieter behavior. Unless you push it a bit. Where it still is louder and coarser than most. But even when quiet, it never sounds great.
(Unless idling or cruising on the freeway, where it’s almost silent then.)
It is really strange since the same engine is so quiet in the CX-5. (but also not so much in the Mazda6)

With 184HP, there is always plenty of power. And the sports mode actually works.
The engine response becomes really punchy. While I didn’t notice that much of a difference in the steering or ride comfort. 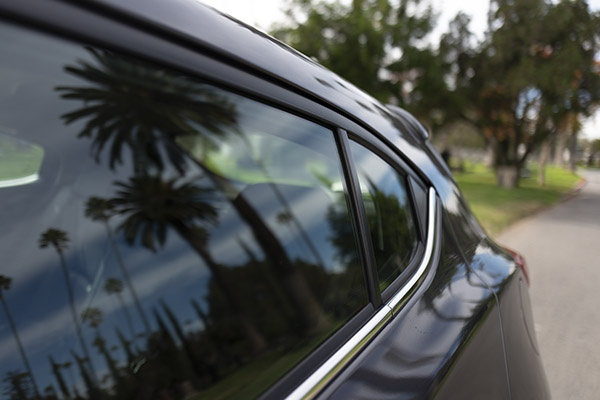 The ride of the Mazda3 is a mixed bag.
I thought it was very firm around town. Almost too much so, most of the time.

But it becomes pretty smooth on the freeway.

Road noise seems to always be a bit louder than in most other cars. Especially around town.

The transmission is fine. Except it is often reluctant to downshift. Which is OK since the engine always has plenty of power available. So that’s not really a big deal. 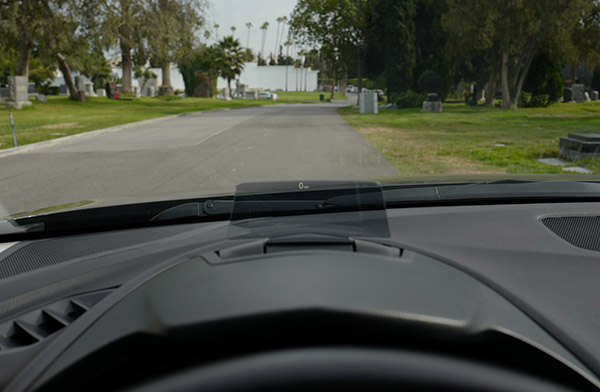 My loaded model had a head-up display.
But instead of projecting the info on the windshield, it uses a little plastic screen on top of the dash. A rather complicated set up that requires a small electric motor that lifts the screen up and down every time you start the car.
And for me, it was also always too low. Basically not that much higher than the regular dashboard instruments.

And speaking of heigh. The whole car felt pretty low. Not as a driving position (which can be adjusted)
It just felt like a lower car than average. Even by just walking up to the car, the door handle felt low.
Which made me feel taller than I am ( I am not that tall at 5′ 11″)

The same thing once inside. The car felt pretty small around me.
The top of the windshield felt a bit too low. The A-pillars felt larger than usual.
It is actually hard to explain… 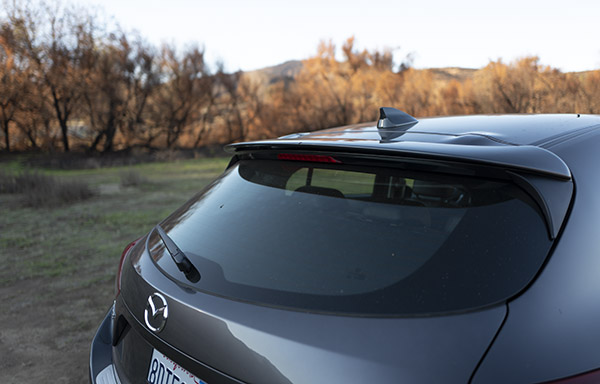 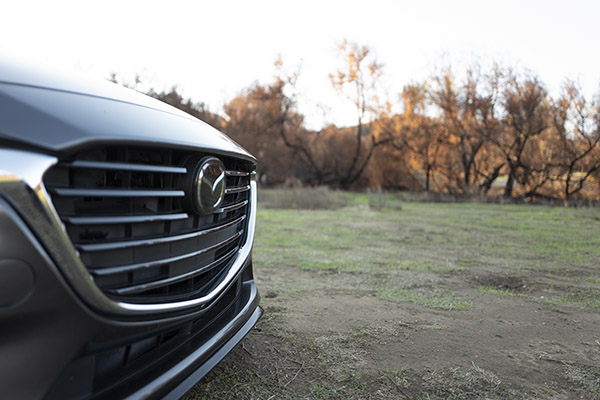 But I had no problem getting a bit over 40MPG on the freeway. 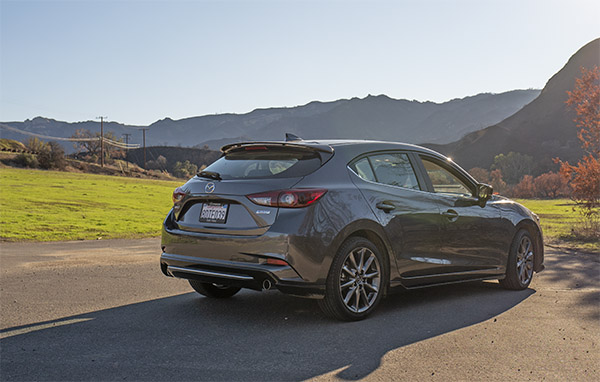 The Mazda3 is definitely on the sporty side of your average compact car.
it has a lot of power for a car that size, but the drive is especially sporty.
Which is fine, but not to everyone’s taste (Especially back seat riders around town)

it is a fun car. the Sport mode works great and makes the car feel even quicker
But I can’t help feeling a lack of refinement in the whole thing.

Compared to the Golf especially. it is much nosier and rougher. Which I understand might be its charm for many.
In sports mode, it does feel like a “less refined GTI”.

I wonder how the all-new 2019 model improves on this.
To me, the main thing would be engine noise. And a more solid feel that could compare better with today’s competition.

Otherwise, it is quite a nice car with a very engaging drive.
Especially for the price.
Without the 2 option packages on my test car, the “still loaded” Grand Touring is $25 000.
With pretty much everything you need or want
( I would avoid the stupid $1750 Appearance package at all cost)

And since an all-new one is on its way, I bet you can get one for a terrific price these days… 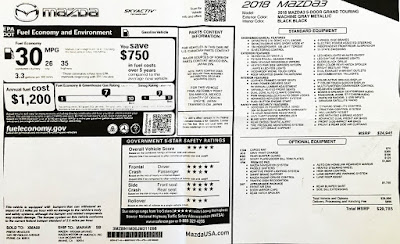