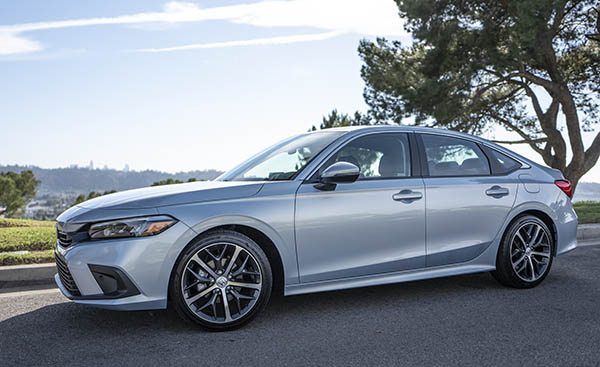 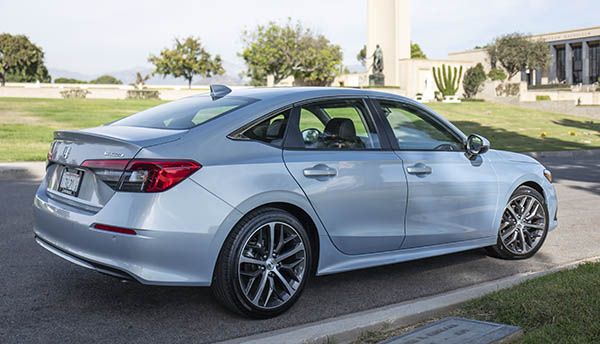 I test drove the “Sport” version of the new 2022 Honda Civic a few months ago and was curious to see how much better was the top of the line “Touring” version.
( I had also driven the Touring Coupe from the previous generation a couple of years back)
In my opinion, the Touring model looks much better than the Sport version. Since I am not a fan of black wheels and spoilers (Although the Sport’s spoiler is pretty small)
The 2022 redesign of the Civic gives the car a new, more conservative personality. But it also feels more upscale and refined.
It ends up being quite a nice-looking car. Although quite invisible as well… 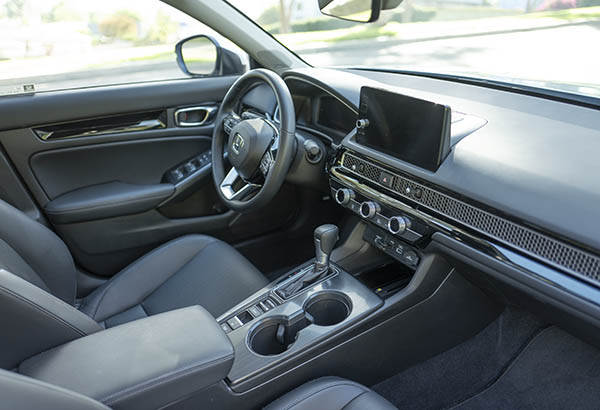 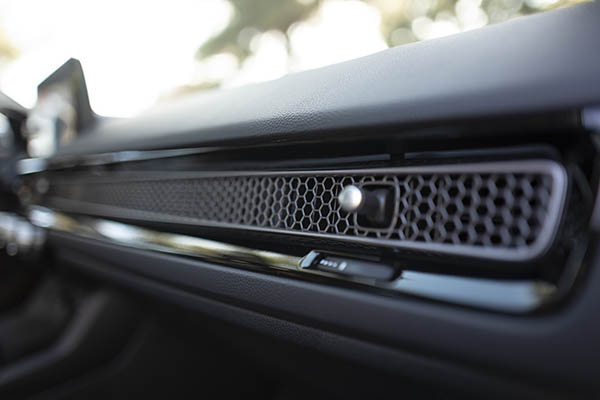 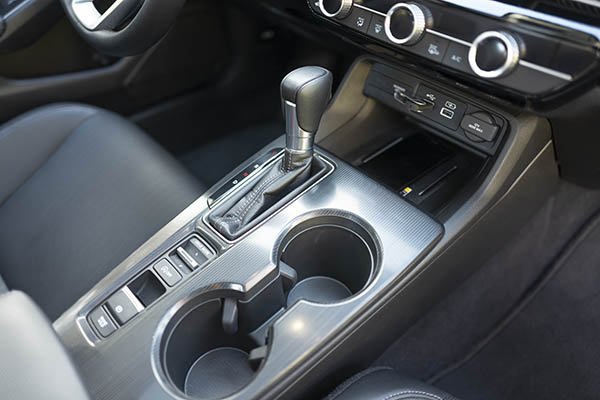 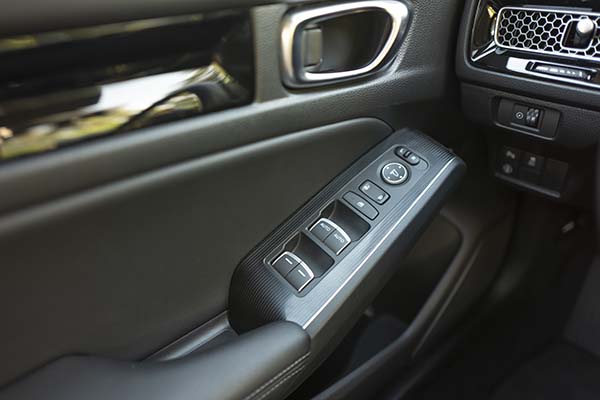 Of course, the interior is mostly the same as the Sport model. Now with leather seats and a sunroof for the Touring version.
Everything looks good and feels very solid and well put together. It is really too bad the screen isn’t better integrated into what is mostly a great interior. But at least, it sits pretty low.
The best part of the Touring interior is the newly available 12 speaker Bose sound system. While not as perfect as what Acura offers, it is quite amazing. It just makes anything sound great.
The 8 speaker available in the Sport and EX versions is fine, but this is a huge improvement. And at least to me, almost worth the extra cash over the EX-L version.
I just wish you didn’t have to get a leather interior to get the great sound.
(I did have a small problem, occurring a couple of times, with the small freezing on me.) 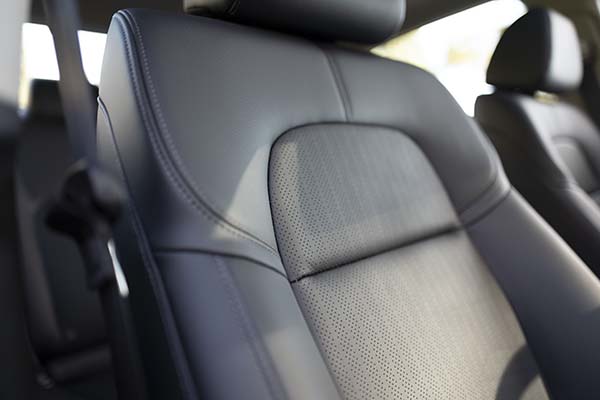 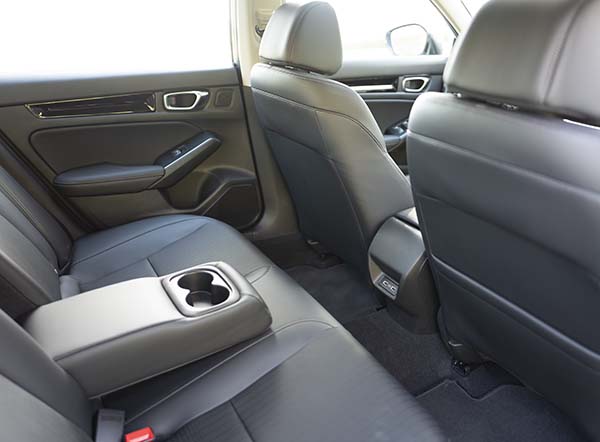 The leather seats look fine, but I wish they were an option.
They are super comfortable on long drives. And while the headrests adust only 2 ways, they are surprisingly soft and comfortable too.
The back seat is huge for what is considered a compact sedan.
A few things are still missing. Like rear-seat vents.
And especially, a seat height adjustment for the passenger. As shorter people will feel like they are sitting in a bathtub.
This should at least be offered on the top-of-the-line version. 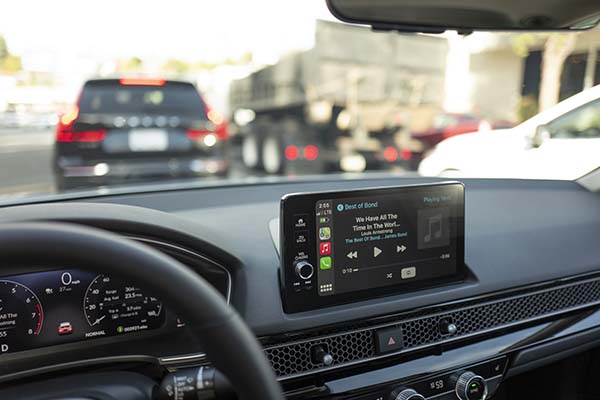 Visibility is pretty much as good as it gets from the driver’s seat. Thanks to a low dashboard, reminiscent of the great Honda models from the ’80s and ’90s.
The 1.5 Liter engine is, like all Honda engines, very smooth and quiet. Even silent when idling.
But as soon as you start, the CVT drone is ruining the experience quite a bit. For some reason, it seems a bit worse than with the base 2.0 Liter engine I drove in the Sport model.
There is definitely more power from a start, but the CVT/1.5 Liter combo just becomes too rough when pushing it. And also seems to zap most of the extra power.
This is basically a car you need to drive as gently as possible to avoid this. Like with most CVTs.
When you do, things improve a lot. Acceleration is actually fine. (pushing it too much doesn’t do much) While the droning sound seems to fade away, and the car is actually gaining speed quicker than it seems.
You basically have to drive the CVT a bit differently to enjoy it. While most people driving it like a regular automatic could be frustrated. 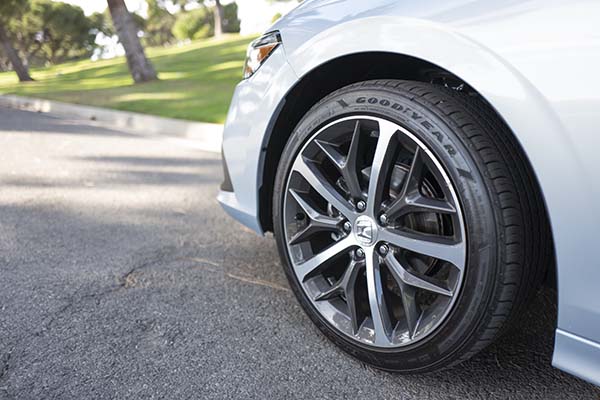 I remember complaining a bit about the rather stiff ride on the Sport model. But the Touring version seems to have the exact same settings and tires. So things are pretty much the same.
But I have to say, the car is firm, but never uncomfortable. And quite fun to drive around.
The road noise can be a problem on some roads. And non-existent on others.
I guess that is what the great Bose audio is for.
I have to also mention that fantastic steering feel. It is really one of the best parts of driving the new Civic. The calibration just seems perfect. It gets a tiny bit firmer in the Sport mode. But the Eco mode doesn’t seem to affect it and I left it alone most of the time.
It is always firm enough, and never loose. Which is extremely rare these days. And the firm feel on the freeway is just perfect for long drives. Even the shape and size of the steering wheel itself are perfect.
Just like in the Accord, Honda seems to be the king of steering feel for FWD sedans. The Civic Touring is rated at 31/38MPG.
Driving gently around town, I did get 31/32 MPG. Which is great.
But I was amazed by the numbers I got on a trip to Joshua Tree National Park.
On the way there I was able to get 50MPG. Which is so much better than the official number.
After driving around the park and small towns for a whole day (various speeds) and back, my average was still over 43MPG.
These are quite amazing numbers that only a Hybrid could match.
It makes you wonder how efficient will be the upcoming Hybrid version of the new Civic. 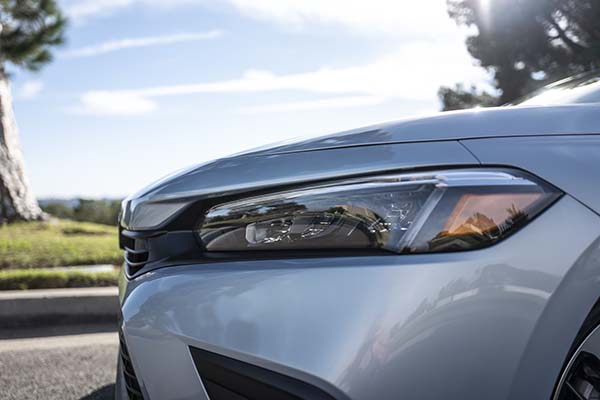 The new 2022 Honda Civic Touring is a great sedan, for a more conservative crowd than before.
A very well-put-together and solid car. One that is also fun to drive, once you stop fighting the CVT and give in to its gentle manners.
(But yes, an 8 speed would be 100% better…)
But that CVT is also responsible for these amazing MPG numbers I was able to get.
After destination, my test car is priced at $29 690. Not cheap, but in line with the competition. And cheaper than most small SUVs 90% of people don’t need.
And with such a roomy interior, this could also compete with most mid-sized sedans.
While SUVs are getting more popular by the minute, the Honda Civic is still the number one vehicle in the industry with Millenials and Gen Z buyers, with over 261 000 sold last year (the last year of the previous generation (over 325 000 sold in 2019)
The Civic is still a hugely popular model, and the 2022 version should have no problem keeping the momentum.